Wireless cameras almost always still need a wire for power. Given that, many argue to just used wired cameras anyway.

Now, we bought and tested Netgear's Arlo, a product that has been around for many years (previously under Avaak), to see if it would beat Blink. One area Blink had problems with was low light, where it flashed a jarring bright white LED anytime it needed low light video. By contrast, Arlo has integrated IR. 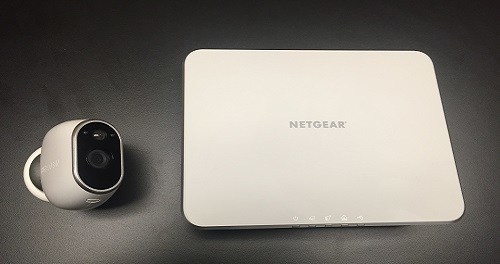 We tested Blink against Arlo for:

Unfortunately, Arlo has acknowledged serious performance problems found in our testing. As such, it essentially disqualifies it until that is fixed. Assuming that they resolve that in the future, Arlo has some advantages (IR light, web interface, manual recording, outdoor specified).

Arlo has a few advantages when compared to Blink:

However, there are key disadvantages as well:

The Arlo starter package sells for ~$170 - $180 USD online and contains one camera and the base station. Up to 15 cameras may be added to each base station. Additional cameras sell for ~$150 each, with discounts (up to $30/ea) when purchased in multi-packs. By contrast, the Blink starter kit containing the hub and one camera sells for $99 online. Additional cameras (up to 10 per hub) cost $60. Both items are available on at several online stores as well as directly from Blink.

The Blink and Arlo have similar dimensions with opposite orientations: 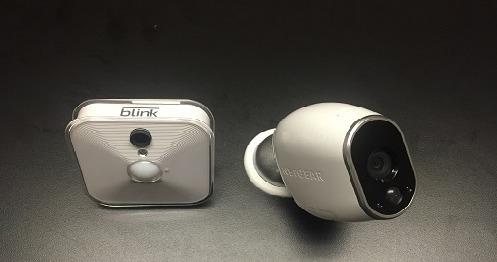 Here we provide a physical overview of the Arlo wire free camera as well as the associated base station:

Compared to most cloud providers, which charge per camera, Arlo's inclusion of multiple cameras for one price is much lower. For example, for four Nest cameras, users would pay $25/month for 10 days of storage ($10 initial + $5 for each additional camera).

During our tests, we frequently received the generic error: "There was a problem establishing a connection to the media server." 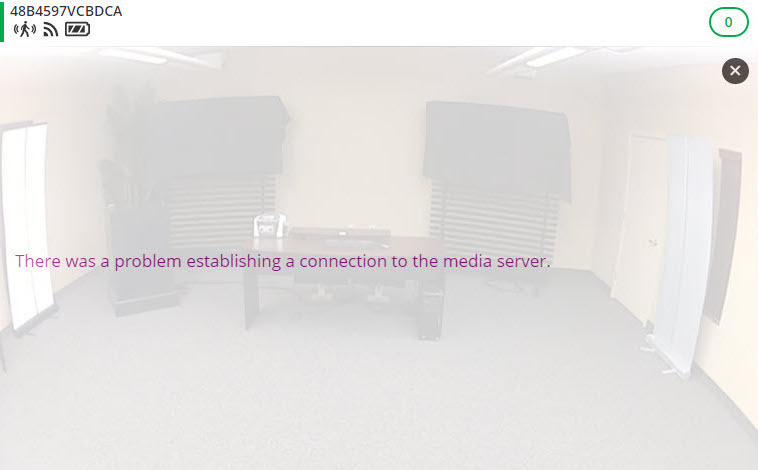 Additionally, after doing live testing for 30-60 minutes, and despite receiving multiple motion alerts, clips from these tests were not saved in our Library. Even manually recorded clips (initiated from the live view) were unsaved at times. Alerts also frequently were sent late, with some arriving two hours after the event had already occurred.

We contacted tech support about these issues and they simply said their servers were overloaded and they were working on adding more, but they gave no ETA for when this may take place.

The Arlo Wireless camera claims "4-6 months" of battery life, shipping with four 3V Lithium batteries.  After a week of motion detection at our office the battery indicator illustration still shows full charge. There is no way to show the battery charge percentage through the mobile app nor the web interface.

We found Arlo's 25' IR illumination claim to be accurate. In the image below, the camera illuminates the back wall of the room, about 25' from the camera. The subject, at about 12', is also clearly illuminated.

Blink's white light LED illuminator provides about the same coverage, with slightly more brightness at the edges, though with the obvious disadvantage of a white "flash" while the camera is active.

Details delivered by both are about the same, with rough details of the subject and the chart legible to the same level. 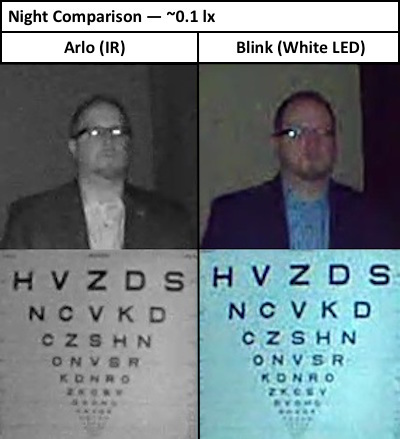 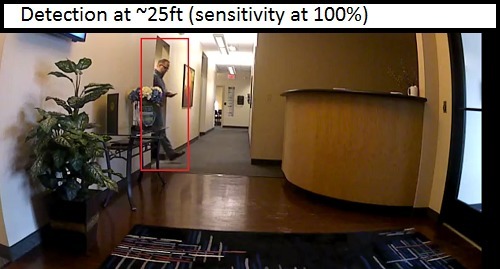 Arlo offers a web interface in addition to mobile apps, with both functioning essentially the same. Video may be continuously live viewed via either interface, though this will quickly drain the cameras' batteries.

As with many other home/DIY platforms, search is limited to a list of clips, with no way to enter a specific date and time. Clips may be exported to the user's mobile device or saved to PC if using the web interface.

We review the web interface in this video:

The mobile app is very similar to the web interface including the look/feel and functionality. Here we review the mobile app: