What should a homeowner use for a 4 channel surveillance system? We recently called up internet reseller Supercircuits who sells multiple types of video surveillance systems, and pretended to be a homeowner looking for a system recommendation. In this note, we examine Supercircuit's pitch for 3 competitive offerings - Analog, IP and HDcctv offering our observations on the pros and cons of each approach.

We asked the Supercircuits sales rep for recommendations and pricing on a 4 camera system. We provided no futher criteria up front. The sales rep asked us for a few pieces of information:

Based on those answers, the sales rep developed a specification for us.

The sales rep did not hesitate to suggest a 'standard' analog 4 camera/DVR offering, and suggested the performance of the equipment would meet or exceed our performance expectations.

Analog Pitch: Our rep's main thrust centered around the solid performance of this $1750 USD kit [link no longer available] in residential surveillance applications. He did recommend an upgrade from the included 420 TVL base cameras to 600 TVL models for a 'crystal clear' picture. The sales rep encouraged we change up to the higher resolution camera because his customers are typically more satisfied with the improvement in picture quality.

When we inquired about the difference between the recommended kit and the 'HDcctv' kit advertised elsewhere on the website, our sales rep explained the difference as being 'vastly superior resolution':

We grabbed a screenshot of our demo below, and we note the resolution type of the cameras being demoed in the lower right corner of the frames: 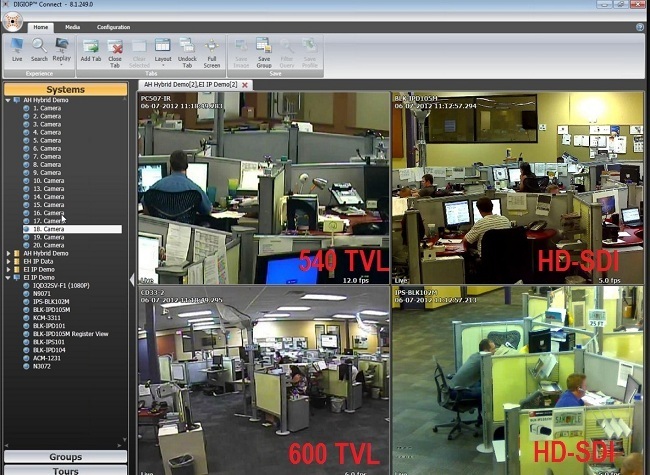 IP Pitch: Rather, the lack of an IP pitch was the noticeable aspect. The sales rep suggested the benefit of a networked IP system really had no applicability to a residential system, and that a premium would be paid for no real functional advantage. The sales rep suggested that without already having a substantial LAN we would not see a benefit for the roughly $1000 per camera cost. According to our rep, the cost of IP would significantly exceed the lower cost of other options.

Even though Supercircuits features a $500 4-camera/DVR kit special on the website [link no longer available], they recommended a higher end analog system with varifocal lens. We agree with the rationale behind the recommendation, and presume the cheap kit is intended to attract attention and serve as a 'starting point' in discussion for requests like ours.

Interestingly, the equivalent HD-SDI/HDcctv kit was not that much more expensive. While HDcctv was not initially mentioned or proposed to us, it became clear that this newer, higher-resolution video technology is closing the pricing gap on older analog video technology. The main driver is that Supercircuits is selling an HD SDI DVR for only ~$200 more than an analog version. As a matter of explaining why it was not initially proposed to us, the sales rep noted that because HDcctv is a relatively new technology it is still very early in penetrating the surveillance market.

Supercircuits' IP offering was fairly non existent. Our sales rep, who expressed no strong justification to look at IP, did not assemble a 4 camera IP quote, nor does the internet reseller offer an 'off-the-shelf' 4 camera IP system.

Based on our own specification, a roughly equivalent IP system sourced from 3rd parties would be closely priced to the analog systems. For example, a kit composed of the following equipment:

Kit pricing would total about $2250 USD, in the same range as the HD SDI kit.

Online Surveillance Sales Trends 2015 on Jun 11, 2015
IPVM has uncovered the key trends and top options being offered across some...
Comments : Subscribers only. Login. or Join.