Most Fooled by Resolution Myth

A common and important mistake confirmed: After years of manufacturer marketing that resolution equals quality, recent IPVM poll results of nearly 400 industry professionals confirms that most are fooled by this myth.

We showed 2 images side by side and asked readers in our Video Quality Training report, "Which image has higher resolution?" with no further details provided and an option for 'Cannot be Determined'.

Disappointingly, a clear majority of respondents selected Image A even though Image A and B are the same resolution, just with different compression levels. Here is a breakdown of respondent's answers: 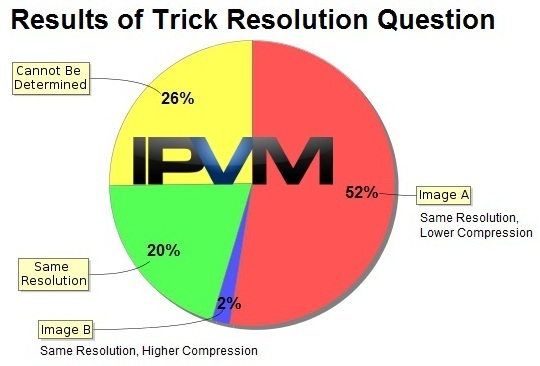 The 'true' numbers are likely far worse. First, we revealed the answer in the following paragraph ensuring that at least some readers found the right answer below before taking the poll. Secondly, regular readers to IPVM have disproportionately strong technical backgrounds compared to the industry at large. With those factored in, 75%+ of the industry falling for this would not be surprising.

Resolution Does NOT Equal Quality

While resolution is a key component in video quality, many other important elements exist that often trump resolution. Three common ones include: