Now, Mobotix has a new series of cameras that cost ~$500. Moreover, Mobotix has doubled resolution from 3MP to 6MP and claim much better low light performance.

We bought a Mobotix P25, shown below: 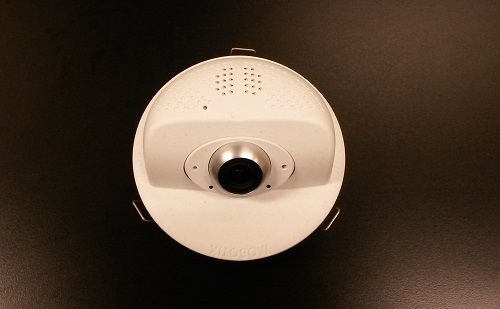 We tested it against 5MP cameras from Arecont and Bosch as well as other leading brands. Here is a low light preview:

Image quality in low light (2 lux and below in our tests) is solid, better than the 5MP Arecont camera, though moderately worse than the Bosch 5MP starlight model due to increased digital noise.

In full light, ~160 lx, image quality was similar to the 5MP models tested, with additional details not seen in 1080p HD cameras.

At default settings (MxPEG, "High" image quality), the P25's bandwidth consumption was higher than all other cameras tested regardless of light level. Bitrates were nearly 3x that of the Bosch 5MP in our ~0.03 lux scene, and 4x at ~2 lux. Lowering quality to "Normal" reduced bitrates somewhat, without noticeable visual impact, though they remained higher than other cameras in dark scenes.

VMS integration performance varied, with Video Insight the only VMS supporting this camera via MxPEG. The P25 integrated to both Avigilon and Genetec via MJPEG. Exacq does not support any Mobotix cameras. Milestone supports some, but the P25 was not listed as supported and did not connect.

The P25 web interface, like other Mobotix cameras, is significantly different from other IP cameras, with more controls, many nested menus, and layouts which may be confusing for all but the most regular Mobotix users. Users must also save changes manually or they are lost on reboot, a requirement not found in most IP cameras.

Conversely, pricing is significantly lower than the Bosch 5MP starlight NBN-80052-BA tested here, which sells for ~$1,000, including lens.

For those invested in Mobotix end to end systems, the P25 and its new 6MP sensor provide solid performance in low light and full light, better than past Mobotix cameras, at a lower price point, making it an attractive option.

However, for those using 3rd party VMSes, the camera's high low light bitrates, lack of H.264 or MxPEG integration to many VMSes, and complex configuration makes other cameras preferable.

The bulk of the P25 camera housing is installed above the ceiling, held with spring clamps, with only the bottom section containing the imager exposed.

Note also that the area around the imager becomes very hot when the camera is operating, too hot to handle with bare hands. Mobotix actually warns of this in their manual:

In this video, we examine the physical construction of the Mobotix P25.

To illustrate physical size of the camera, the image below shows a side by side comparison of the Mobotix P25, Axis M3005 and Axis P3354. 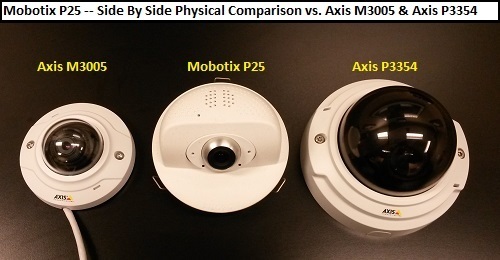 Below is a screencast overviewing the Mobotix P25's web interface. Some things to note:

Those interested in more in depth review of Mobotix configuration may see our Mobotix Camera Configuration Tested report. Though it uses an older firmware version, most options remain unchanged.

We tested the Mobotix P25 in our standard conference room scene, and the ~22 HFOV used for testing can be seen below. As a side, default white balance was used for all cameras tested. 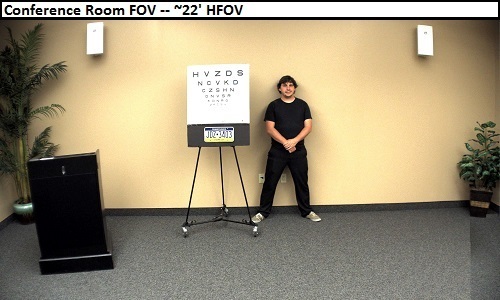 In full light, the Mobotix P25 washes out the bottom portion of our test chart past line ~5-6, similar to that of the Bosch and Arecont cameras tested. Our subject is easily identifiable in all of the comparisons in this scene, however we notice slight noise surrounding our test subject viewable on the wall. 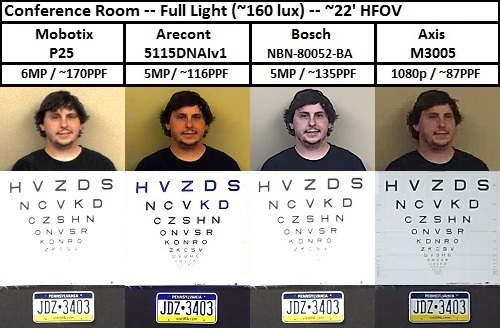 Lowering the lights down to ~2 lux, the color only Mobotix P25 is able to identify our subject and able to read down to line ~6 of our test chart, though it is moderately more noisy than the Bosch 5MP starlight. 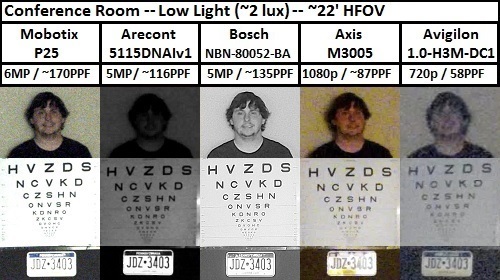 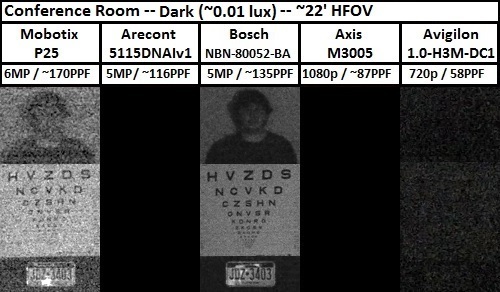 In low light, P25 bitrates are significantly higher than the Arecont and Bosch 5MP cameras, especially considering frame rate drops to only 2 FPS vs. 5.

In full light, the P25's bandwidth consumption was moderately higher than the Bosch 80052 and much lower than the Arecont AV5115DNAIv1.

Though bitrates were higher than H.264 cameras using MxPEG, they were drastically higher when switching from MxPEG to MJPEG in the P25. In full light, for example, bit rate jumped from about 2.2 Mb/s to nearly 20 Mb/s. At ~0.03 lux, MJPEG bitrate was over 30 Mb/s. Users of VMSes which only support MJPEG in the P25 should beware these huge bandwidth numbers.

We conducted our test using  the following camera firmware versions: