Mobotix was one of the first manufacturers with panoramic cameras.

Since then, everyone has gone 360, and panoramic cameras have become commonplace.

Now, Mobotix has a new wedge style panoramic camera that is being offered at a steep discount to Mobotix' existing models.

In this note, we examine the features, prices and competitive positioning of the new Mobotix camera.

The i25 is a 5MP wall mounted hemispheric camera with a FoV that covers 180° X 160°.  It comes in two models, a color imager (day) unit or a monochrome/black and white (night) unit.  The unit has a 'wedge' form factor that measures roughly 4X6X2 inches: 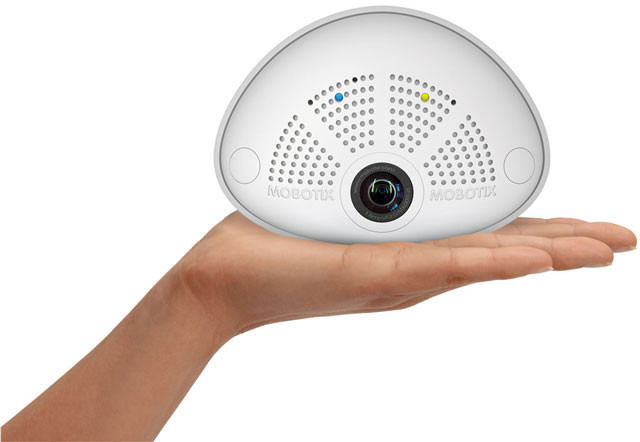 The i25's most notable feature is the price. The camera has a street price of ~$530, about a third less expensive than the Mobotix Q25M. The i25 strips off some features in order to lower cost, but is built around a 5MP camera:

Compared to the ~$800 outdoor rated Q25M, the i25 lacks an integrated speaker, but retains onboard storage and integrated microphone.

However, the i25 has 3 key weaknesses, 2 of which it shares with all Mobotix cameras:

Despite its exotic appearance, the i25 is not without alternatives from other vendors. For example, the Vivotek CC8130 180° cube is less than half the price (~$250) although it maxes out at 1MP, has similar indoor only limitations, and does not support onboard storage.

The ACTi B54 dome will also be a likely good alternative, offers 5MP, true day/night. However, while a 360° panoramic, the B54 will likely have lower pixel density than the i25 in 180° applications.

With the wall-mount limitation, 180° AoV may not be needed.  In many situations, including corner mounting, a wide-angle camera would suffice. The IPVM Camera Finder returns more than 19 wide-angle models with an AoV of 130° or higher at the same or lower price as the i25. Many of those models will be usable in the same applications as the i25, with majority also claiming ONVIF S and offering broader VMS support as a result.

Mobotix has long had much higher pricing than even their Western competitors, with $1,000 or more commonplace. As such, this makes the i25 one of their least expensive offerings ever. Plus, if you use their own included VMS, that eliminates VMS licensing.

Given the large number of existing panoramic cameras and wide angle domes on the market, plus Mobotix's general limitations, we do not think it will have a large impact. However, it should appeal nicely to their declining core customer base.