The market for surveillance mobile applications has exploded in the last 3 years. Now, almost everyone offers one - from VMS providers to third party app developers and even to low end DVRs and home offerings.

The question then is: how many users are actually taking advantage of these capabilities? To that end, we asked the following question of respondents in our Winter 2012 survey: "What percentage of your customers use mobile applications (iPhone/Android, etc.) for monitoring their VMS?"

Given the prevalance of smartphones today and omnipresence of surveillance mobile apps, they results show total adoption is still limited. However, as our break down in the second half of the report shows, adoption is most restricted in the larger camera count applications.

The most common comment from respondents deploying mobile apps less than 10% of the time was that the app is a good sales tool, high on the "wow" factor, but rarely purchased, and even more rarely used:

This is understandable, as most apps have been basic, with the ability to view live video only. Viewing of archive and event video, alarms, and other functions have only recently been added. We expect that more advanced features will become commonplace as time goes on.

The second most common reason for not deploying mobile apps was issues with IT policy and coordination, or lack thereof:

Opening ports in firewalls is always a concern of IT departments, and is often required for deployment of mobile apps. For cameras deployed on a separate network from the corporate LAN, additional complexities are presented, as the camera LAN and corporate LAN must be connected, and the corporate LAN must be opened to the internet or VPNs created for connection of remote devices. We reviewed and demonstrated these issues in our test of the iPhone and iPad for surveillance.

The ability to check in on one's business while away, without having to use a PC, is one of the most desirable features of mobile surveillance apps. This was the most common reason given by those who were deploying mobile applications 50% of the time or more:

This ability is especially appreciated by smaller end users, where employees may have more varied duties, with no dedicated security staff. We discuss this below.

Larger camera count systems are far less likely to use mobile apps than smaller ones. The trend is pronounced. See here: 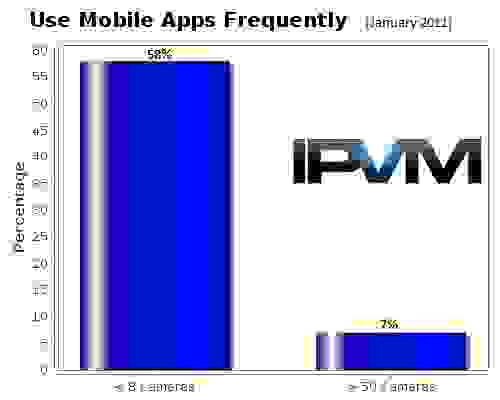 These two segments differ drastically with smaller system far more likely to use mobile apps than larger systems. We suspect this due to different use cases.

For facilities with higher camera counts, guard staff is often present, monitoring video from a central location. Information is normally relayed to mobile guards via radio, without the need for video. This makes mobile access to video overall less critical. However, in some cases, where guard staff is small or completely mobile, these applications can be valuable, especially if video can be triggered based on alerts, such as access, intrusion, or analytic events. Specialized features of some mobile clients, such as DVTel's geo-locating features and recently announced video capture capabilities are also targeted more at higher-end systems.

In facilities with low camera counts, staff is likely much smaller. Often, small business owners will be the only user of these systems. Providing mobile access to video is more attractive to these users, as it allows them to multitask better, making them able to check in on a facility from anywhere, instead of needing to be in front of a workstation.

VMS Mobile App Usage Statistics 2021 on Oct 01, 2021
Mobile app usage continues to grow, but how quickly? And what is driving...
Mobile VMS App Usage Statistics Report on Jun 01, 2016
Overall usage of mobile apps has risen significantly from our 2012 report,...
Video Surveillance Statistics Directory Vol 2 on Mar 18, 2012
In this report, we aggregate and present numerous statistics about how...
Comments : Subscribers only. Login. or Join.