Pre-crime is now a reality and so too is hand waving VMS video manipulation. Ok, well maybe not the former, despite the uninformed hyping BRS Labs as this. However, Avigilon has quite an interesting demonstration of video manipulation similiar to the movies like Minority Report. Instead of using a mouse or touching a screen, Tom Cruise controls video with hand gestures.

Avigilon had something remarkably similar using the XBox Kinect [link no longer available], as shown in the video we captured below: 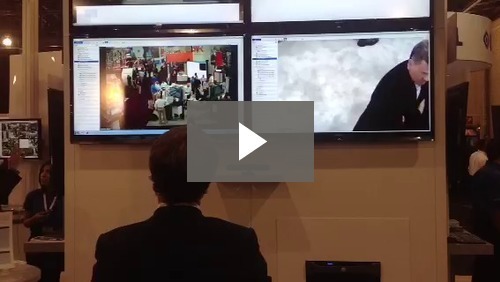 Avigilon used both audio (e.g., "Show camera 1") and hand gestures to control video, though the audio controls are not comprehensible given the crowd noise on the show floor.

Note this, ironically, does not demo well on a trade show floor with people mulling around the demonstration as the crowd interferes with the sensors.

This is not an Avigilon new release nor is it scheduled for any release in the immediate future. Rather, it was a technology demonstration.

We haven't used it enough to really know how better or worse such controls would be better than a mouse and keyboard. The voice control element seems useful. The hand gestures are trickier to forecast. Will they cause fatigue faster? Will it be harder or to slower control than conventional ones?

In the consumer technology market, the Leap controller has gained a lot of buzz. Scheduled for general release in early 2013, it aims to be a low cost, hand gestured control system. Lots of enthusiasts and gamers are excited about its potential. And at only $70 the price looks right. Here's the compay's demo video:

Could it or the Kinect be used with surveillance systems? We are not sure but experimentation will no doubt increase over the next few years making this an interesting area for future consideration.