How well does Milestone's LPR work?

The 1 minute video excerpt below, from our 15 minutes of video inside, gives an overview of Milestone's LPR:

One base license is required per server, with a channel license required for each camera. A plate library must be purchased to cover each state or country to be used with the system. For example, to read United Kingdom, French, and Swiss plates, three libraries are required (one included in base plus two additional).

XProtect LPR provides high accuracy when setup guidelines are followed, with tight integration via the Milestone Smart Client, at a price point much lower than many dedicated LPR systems, such as Genetec AutoVu, though without the advanced license plate analytics and turnkey mobile setup of Genetec.

However, users should beware of increased bandwidth/storage requirements of MJPEG, since the stream used for LPR processing must also be retained if plate images are to be saved. Also, beware of high PPF requirements which likely preclude LPR cameras from being used for general surveillance purposes.

Finally, if high speed (>40 mph) recognition is a must, dedicated hardware/software platforms are likely a better choice.

An LPR plugin must be added to each client machine to enable events. Events are shown in a special LPR pane, with reads listed directly next to live video. Clicking an event switches to playback mode in the individual pane. An LPR tab is also added, allowing users to more quickly review reads, search for specific plates (including partial matches), and create reports.

This video provides an overview of LPR use in the XProtect client:

The XProtect LPR server runs as a separate service, apart from the XProtect image and recording servers. Milestone recommends it be run on a dedicated machine and not the VMS server. In our tests, the LPR server increased CPU load by about 17% on average (dual quad-core Intel I7, 2.4 GHz), with little impact on memory usage.

This video reviews basic configuration of the LPR server:

These issues are exacerbated due to the size and length of the Milestone installation, which can easily take over half an hour during a proper install. Users should be prepared to burn extra time (hours, possibly) during installation to account for these errors.

Adding an LPR camera to the server requires a short configuration process, capturing or loading screenshots of the field of view with license plates in the scene, and optional adjustment to a handful of settings such as processing framerate, number of plates in the scene, etc.

The basic process is overviewed in the video below:

In this in depth video we cover advanced parameters such as processing frame rate, number of plates in scene, processing time, and more:

These settings are atypical, to say the least, since the vast majority of IP cameras installed use H.264, with MJPEG used only in special cases, very infrequently.

H.264 may be used for LPR cameras. However, it introduces significant processing delay, with the time between the car passing and the plate being processed increased from <1 second (using MJPEG) to 10-15 seconds.

This delay resulted in recognition events becoming useless for retrieval, as the event was processed well after the actual event occurred. Because of this delay, clicking on an LPR event retrieves video after the car has already passed, seen below: 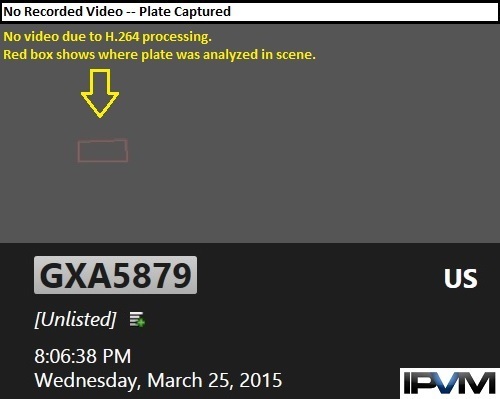 Milestone recommends using 4 FPS for LPR processing. Note that this framerate is separate from live and recording framerate, which may be set separately or use other streams.

Increasing framerate from the recommended 4 FPS for processing introduced significant processing delay, similar to using H.264, seen above, and did not improve recognition performance.

Milestone does not give specific limits on resolution the server is capable of processing. Instead, they give PPF guidelines of 130 PPF minimum for US plates, and 180 PPF for Euro-style plates.

These figures are actually based on a strange recommendation of 2.7 pixels per character "stroke" (line making up a character), which varies by plate size and style, but equate roughly to the 130/180 PPF numbers above.

We tested camera resolutions from 720p up to 3MP and found no significant difference in processing load or delay.

These are the most common issues found in our testing:

The most common issue we found in recognition was mistaken characters, such as B being mistaken for 8 or 0 mistaken for O. 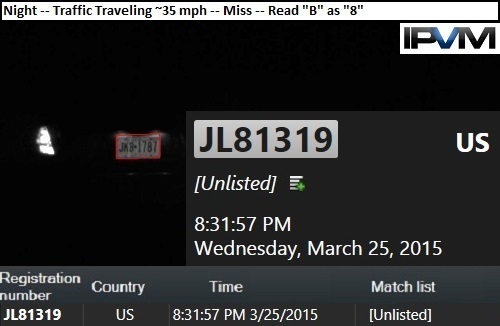 Additionally, sometimes characters were simply not read, most commonly the first or last character of a license plate: 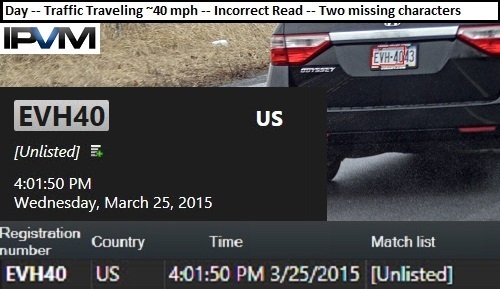 XProtect LPR frequently read the same plate multiple times. In all cases, one of these reads was correct, though others may be incorrect, as seen below: 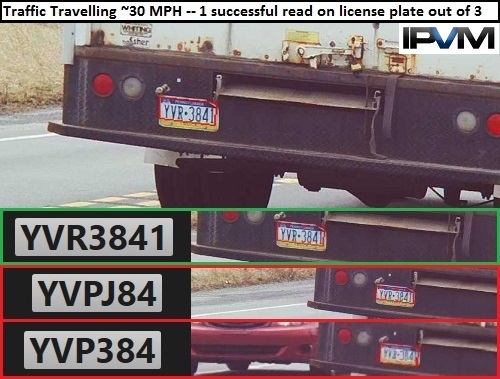 The key issue which caused extremely poor recognition rates in non-IR cameras was high gain levels. In order to produce images in low light, large amounts of gain are applied, which increases digital noise, partially or fully obscuring the letters of the license plate. This caused complete misses and misreads in those which the camera did capture.

In many (but not all, such as the Bosch NBN-80052 seen below) cameras, gain may be manually lowered, but this darkens images, potentially making them unusable without adding visible or IR illumination. 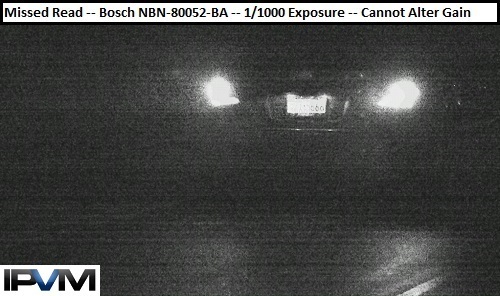 Milestone XProtect Corporate 2014 9.0c was used with XProtect LPR 2.0a. Country module used was US, with no specific state modules used. Read and recognition statistics are taken from over 500 reads collected over multiple days of testing.

Camera firmware versions were as follows:

Directory of 61 LPR / ANPR Providers on Feb 21, 2018
License Plate Recognition / Automatic Number Plate Recognition are a type of...
Milestone XProtect Essential+ Free VMS Tested on Nov 09, 2017
Milestone continues to expand its aggressive free and low-cost offerings,...
Genetec Lower Cost Sharp V LPR Camera on Nov 23, 2016
Genetec has announced the latest offering in their AutoVu Sharp line,...
Major Manufacturers Dropping MJPEG on Nov 04, 2016
MJPEG has hung on for years, still in use in some systems despite H.264's...
License Plate Capture 4K Test on Jan 11, 2016
License plate capture is one of the most popular surveillance applications....
Genetec Cloud LPR Examined on Apr 10, 2015
The cloud is yet to be a significant factor in video surveillance. Now,...
Testing Messoa 3MP LPC Camera on Apr 02, 2015
License plate recognition has historically required specialized cameras with...
Comments (14) : Subscribers only. Login. or Join.