Last year, an inventor / troll said they were going to sue end users for violating a patent they have on video surveillance technology.

Now, they have fulfilled their promise with 28 lawsuits this year. However, Milestone Systems has struck back, suing Hawk.

In this note, we examine what is happening.

The company, Hawk Technology Systems has essentially patented multi-streaming video surveillance (the patent in question is RE43,462, a re-issue of patent 5,625,410, filed in April 1995.)

Here's how they describe it:

Hawk has sued a lot of end users this year. Here is a record of all the lawsuits Hawk is involved in since the beginning of 2014: 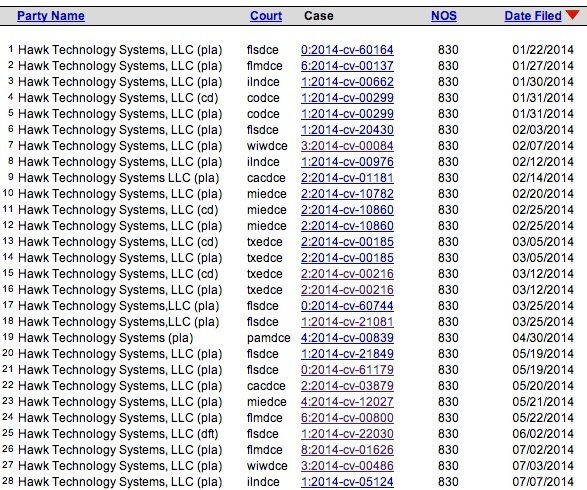 Here are a few of Hawk's lawsuits:

Among the many end user lawsuits Hawk has filed are a number of Milestone end users (Milestone cites 2 in particular - Loyola and Woodman's Market). To proactively stop further suits, Milestone has filed its own lawsuit against Hawk. Milestone's goal is to have the court declare that Milestone does not infringe on these patents.

Milestone has made a number of counterarguments including prior art, claiming that, "As of June 12, 2012, when the ’462 patent reissued, Milestone Systems A/S had invested fourteen years of effort to develop its video surveillance software products, including the development of XProtect."

The lawsuit was filed in June 2014 and is being litigated.

With Hawk relentlessly suing end users, manufacturers need to increasingly examine what to do about this.

Obviously, it is bad for business and for reputation to allow one's customers to be sued for using one's products. Even if Milestone wins, this most certainly would only apply to their products and would likely require each manufacturer to replicate Milestone's actions.