In a recent interview, Milestone Systems declared that they will reach an astounding and unprecedented 80-90% global market share and become the 'Microsoft of VMS.' In this note, we analyze why Milestone cannot achieve such market share yet why this reveals important tactical aspects of Milestone's go to market approach. Plus, we look at how comparing themselves to Microsoft runs counter to their historic identity and could increase industry ill will towards them.

In the interview, Milestone's CEO made a number of important and detailed claims: 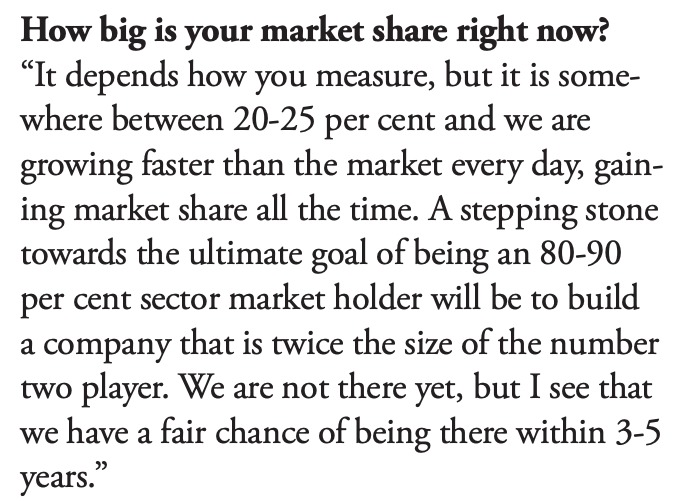 Milestone is a very well organized sales and marketing organization that is clearly building a global infrastructure. Unfortunately, for Milestone, that is not sufficient to reach the near monopolistic share they seek.

Lack of Differentiation or Market Power

Typically, when companies achieve this, it is because they control a key resource (e.g., Microsoft and the desktop OS) or deliver a solution that cannot be replicated (e.g., Apple and iTunes/iPod). Milestone meets neither of these criteria.

With Microsoft, if you did not choose their OS, you were blocked from using and or accessing critical applications. With Milestone, that is not the case. There are many other products that do fundamentally the same thing and are not blocked by not being from a single manufacturer.

With Apple, the iTunes/iPod experience was so much better than anything else, that there was little other choice for digital music. While Milestone is a solid company, it's offering is not so incredibly unique that it is the only realistic choice (and, for that matter, nor is any other VMS).

In the best case scenario, accepting Milestone's own current market share estimate, we estimate that Milestone would have to grow at their historical 41% rate for the next 7 years while the VMS market as a whole averaged a far lower 25% rate (i.e., Milestone has to grow at 60% faster rate the market average for most of this decade).

Here's what it looks like in a simple spreadsheet we created:

Growing that much faster than the overall market is hard for any company, especially for a company that is 13 years old and already has a sizeable market presence.

The surveillance industry has almost no 80-90% market share players (at least not in any mainstream categories). "Leaders" with 20-30% market share is impressive. The big reason is the fractured channel across countries and the world. Getting to such large market shares means displacing dozens of entrenched market competitors throughout the world - Bosch, Honeywell, Pelco, UTC, Tyco, etc. What makes Milestone so incredibly compelling that they can overcome all of this? We do not see a plausible story for this.

Milestone is depending on acquiring rival VMS companies and expanding them to capture 1/3rd of the overall global VMS market. Assuming that Milestone gets funding for this (they obviously do not have the cash today), operationally, we think it will be difficult for them to manage numerous VMS lines. They already have 6 lines today that cover everything from free to very large scale systems. What value would additional VMSes bring to Milestone? In the interview, Milestone's CEO notes that they 'might become more aggressive, and acquire a local player in a certain region.' Can Milestone afford and would their rivals like Digifort in Brazil or Axxonsoft in Russia, agree to such offers?

Milestone historically has low profits and, as they acknowledged to us this summer, that is by design. The question, then, becomes: How long can they continue to operate in such a low profit environment? Related, how much does this low profit tactic contribute to their market growth rate? Microsoft and Apple are far different than Milestone in a very important attribute - they print money. Eventually, Milestone will need to show that it can be very profitable as well.

At some level, really thinking that any VMS company, even Milestone, can achieve 80-90% market share is silly. We might as well analyze the probability of Milestone's CEO becoming the King of Denmark.

That noted, Milestone clearly is revealing its priorities. Integrators and competitors should clearly take head. Milestone could have emphasized that its focus was creating great products (the 'Steve Jobs' approach) or targeting the high end (the 'BMW' approach) or even solving a certain problem for a certain market (focusing on education, retail, etc.).

Goal #1 for Milestone is quite clear - maximize market share. When you look at their actions over the last 2 years, especially the steep price drops at the entry level, this makes a lot more sense.

Putting Competitors Out of Business

Unsaid, but inherent in any plan to get to 80-90% market share, is putting their competitors out of business. Milestone will have to suck all the oxygen out of the VMS market to do this. One way to accomplish this is to keep dropping prices until your competitors can no longer cover their fixed costs. At that point, they are forced to either exit or sell at rockbottom prices.

Companies that are focused on increasing market share through expanded channel distribution have product development as a secondary priority. To that end, we expect Milestone to continue to mimic features that other VMSes already have. For example, each release of Milestone Corporate basically consists of features that Genetec released the year before. On the positive side, a company that is great at sales and marketing that can effectively mimic technology leaders is in a good position to grow. However, competitors can seek at least temporary advantages by focusing on building great products.

Dangers of Comparing Oneself to Microsoft

While Microsoft is clearly a symbol of a financially successful, powerful company and might be a useful analogy for private discussions with investors, this is a poor and dangerous comparison for use within the video surveillance community.

Microsoft is typically feared and/ or hated within the technology community for their heavy-handed ways of dealing with partners and potential rivals. Indeed, Microsoft is frequently called the Evil Empire for just this reason (actually referenced in the Wikipedia page for the term Evil Empire). Milestone's CEO might as well said his role model is Darth Vader.

This is particularly out of place as Milestone has taken great pains to be very conciliatory and non-confrontational (i.e., the anti BRS Labs). Milestone always talks about being an open company who wants to partner with seemingly everyone. Saying that they want to be the 'Microsoft of VMS' runs against all of their historical messaging.

Putting aside their unrealistic market share targets, we think Milestone's claims show that they will focus on maximizing market share by strengthening their global sales and market organization around the world, dropping prices to punish competitors and mimicking feature sets to pace current VMS technology offerings.

Though Milestone's market share remained roughly the same, they were able to be acquired by Canon in 2014.

Milestone 'Free' Takeover of OnSSI Accounts on Oct 02, 2015
It's getting nasty. Last month, we reported how Milestone and OnSSI were...
Comments : Subscribers only. Login. or Join.