The Milestone ONVIF Bridge could be a breakthrough.

Now, Milestone's ONVIF Bridge, enabling open, free 3rd party integration of live and recorded video could make one of the bigger players more open and spur their rivals like Avigilon, Exacq and Genetec to do the same.

But does it work?

We tested the Milestone ONVIF Bridge with 5 VMSes including Avigilon, Exacq and Genetec to see how it worked.

While marketed as an 'ONVIF' Bridge, it worked more like an 'RTSP' Bridge for live video only sharing.

In our tests, the Milestone ONVIF Bridge failed to work with most VMSes, with only Avigilon Control Center able to connect properly, with Exacq and Genetec even causing the service to crash upon connect.

RTSP streaming worked with all VMSes tested without issue, making it a potential option for those which failed to connect via ONVIF, though it is more time consuming to set up and lacks advanced features such as PTZ control found in the ONVIF integration.

Beyond the Bridge not working well, which is certainly a problem, we suspect tech support would be a challenge if the Bridge is being used to 'takeover' existing Milestone accounts. On the one hand, Milestone confirmed that they would "support the reseller using the ONVIF bridge to make their project work, regardless of what other components they use." On the other hand, Milestone also noted, "The support would however be limited to the functionality of providing video out. Support on the receiving end, the 3rd party client, is not in scope for Milestone support." Moreover, Milestone clarified that they intended use was more for central monitoring and that they were cautious about the Bridge being used for competitive / takeover purposes

Finally, the 'ONVIF' Bridge, despite its name, is not officially ONVIF conformant, as it only uses a subsection of ONVIF capabilities, which eliminates the benefit / potential of validating both sides to the official ONVIF standard.

Because of this, any attempt to position the Bridge as a solution to takeover live and recorded video monitoring from Milestone to a 3rd party VMS faces significant risk in working reliably.

The Milestone ONVIF Bridge is available starting with version 2016 R2 at no additional charge.

It is available in all versions of XProtect except the lowest two tiers (Go and Essential).

Note that it is a separate server component, not built into the Milestone server itself.

It may be installed on the same server or a separate server if CPU load is a concern. In our tests, CPU impact was low, only increasing load by 1-2% for 4 cameras (mixed resolutions from 720p to 5MP).

There is little configuration required for the ONVIF Bridge with users only needing to supply credentials to the Milestone server during installation.

Once installed, ONVIF and RTSP ports may be changed (default to 580 and 554, respectively) and users for remote systems created 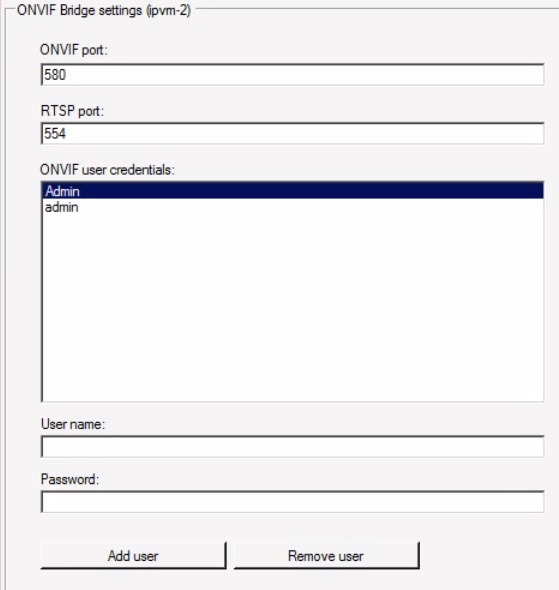 The second tab of ONVIF Bridge configuration contains settings which are reported to ONVIF clients (not actual). The full resolution stream is sent via ONVIF as well as RTSP, regardless of what is entered here, with no transcoding is performed.

Milestone claims in their documentation this step reduces the time required to connect to clients. Users may also select the "Use configurations from cameras" option to report the camera's actual CODEC settings to VMes. However, in our tests, this option proved less reliable, with Avigilon functioning properly with it disabled, but not connecting at all when using configurations from cameras. 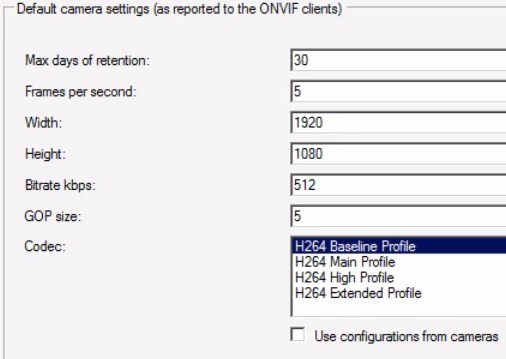 We look at configuration in more detail in this video:

Milestone claims the ONVIF Bride supports recorded video via Profile G. However, this is of limited use, as only two VMSes (Axxon and Visiospace) are officially conformant. Moreover, in our tests, Axxon Next was unable to connect to the Bridge and stream live video, let alone recordings.

ONVIF Device Manager was able to discover and connect to the ONVIF Bridge without issues, with live video properly displayed for all devices. However, configuration capabilities of ONVIF DM did not function properly, with CODEC, network, time, and other settings not able to be configured as they may be with most ONVIF devices.

In our tests, connecting to the ONVIF Bridge via ONVIF failed in most VMSes, including Exacq, Axxon, and Genetec. Further, when attempting to connect with Exacq or Genetec, the Milestone ONVIF Bridge service crashed and had to be manually restarted. These issues occurred regardless of number of cameras, throughput, or Bridge settings.

Only Avigilon Control Center was able to properly connect and stream ONVIF Bridge cameras, and only when the "Use configurations from cameras" option (discussed above) was disabled.

We review these issues in this video:

Though it connected and streamed properly, stream configuration (below) and PTZ controls did not function in ACC in our tests, eliminating the two main benefits of using ONVIF over RTSP. Even simple configuration tasks such as renaming devices failed in ACC.

The ONVIF Bridge also offers an RTSP option for camera streaming, which worked without issues in all VMSes in our tests, in contrast to the ONVIF integration.

Note that as is typical with RTSP streams, no camera side VMD or other events, I/O, or PTZ control is supported.

The simplest way to locate camera RTSP URLs is via ONVIF DM. Users may simply copy the RTSP URL from the Live Video menu and paste it into their VMS (if supported).

If ONVIF DM is unavailable, users may build the URL via the following format:

The following VMS versions were used in this test:

Milestone XProtect 2019 R1 Tested on May 15, 2019
For the past few years, Milestone has released quarterly software updates...
Directory Of 120 Video Management Software (VMS) Suppliers on Aug 30, 2018
This directory provides a list of Video Management Software providers to help...
ONVIF Profile G Video Storage Test on Aug 26, 2016
A standard to retrieve video stored on 3rd party devices. This is the aim of...
Comments (15) : Subscribers only. Login. or Join.