That has been the goal of Micropower for 5 years. However, low resolution and framerate have limited its appeal.

Now, they have improved resolution, framerate, and other features aimed at these limitations.

In this note, we examine this new release, how it relates to old models and other solar options, and its potential impact on MicroPower's positioning.

For those unfamiliar, MicroPower's solution consists of low-power (<1 watt) surveillance cameras packaged with solar panels which transmit video using a proprietary 2.4 GHz protocol to a central hub, which connects up to 6 cameras to the surveillance network. Transmission range is specified up to half a mile line of site.

A typical system is shown in this diagram: 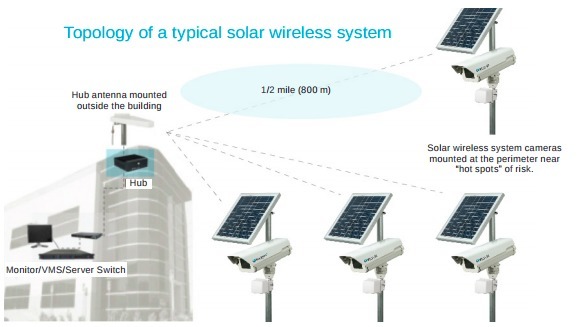 There are three key improvements to MicroPower's line:

The Solveil currently integrates with VMSes via RTSP, as it has in past iterations, but MicroPower says the plan ONVIF conformance in their next release.

New models replace the previous generation, with older models EOL in the next few months.

Pricing of the updated line is similar to past models, with MSRPs of ~$3,000 USD per camera and ~$2,000 per hub. MicroPower says a 4-camera system is priced at about $13,000-18,000 depending on location (number of solar panels required) and lens selection.

This pricing is competitive with or slightly lower than other options, depending on camera count. For full comparisons to other options, such as solar surveillance kits, see our coverage of their previous generation.

With these new improvements, MicroPower has addressed three key limitations found in their past line which may have made custom integration of camera, solar kit, and wireless (from separate manufacturers) more attractive. While solar surveillance remains a niche, these updates may find them useful in more applications. That being said, with resolution continuing to move upward, and 1080p now commonplace, MicroPower may soon find 720p cameras 'behind the times' and must continue to develop higher resolutions at these low power rates to keep up.

For more information on solar surveillance, see our further coverage, including: