Users depend on architects and engineers (A&Es) to design buildings that best meet their needs. However, many A&Es use specifications from door hardware manufacturers that give away specification writing 'services' for free, raising concerns about unfair influence by manufacturers. In this report, we examine these concerns and evaluate their impact on end users.

While A&Es have broad responsibilities when designing buildings, they often lack skills and expertise in niche areas. For example, in a typical project, an A&E firm will design or specify various details including dirtwork, structural building design, plumbing and electrical plans, down to minutiae like placement of soap dispensers and finish paint color. The scope of knowledge demanded is very broad. As a result, many A&Es form relationships with consultants who specialize in particular building aspects.

In our market, a section named "Doors and Door Hardware" within CSI 'MasterFormat' Division 8: Openings is one such area where A&Es hire design specialists. A&Es welcome outside help here because the subject is technical and specialized. When door hardware manufacturers volunteer to write this spec, it becomes an opportunity for that manufacturer to fill out a hardware schedule with their own products, regardless if those products represent the best option available for the end user.

As one security consultant noted to us:

"The practice of manufacturers writing specifications for architects and engineers is very commonplace in the building construction industry. Most 'hardware consultants' that write door and lock hardware specs for A&Es are employees of manufacturers or commissioned manufacturer's reps. They come to the architect's office, review the drawings, and prepare a complete hardware schedule and hardware specifications - all for free. Most will also provide construction detail drawings at no charge that can be directly inserted into the architect's drawings."

Manufacturers are motivated to provide this service for free because it allows them to specify their own products without engaging in a competitive sale. Since building plans and specification sets represent legal contracts, changes or deviations from the listed products are often not accepted. A manufacturer can easily write this specification with 'no substitutions' clauses unless specifically instructed not to do so by the A&E. Even if a specification permits alternatives, detailed specifications may be included by the manufacturer that can only be met with that manufacturer's products.

For example, this sample hardware specification from Sargent provides an example of how a 'manufacturer written specification' affects final project cost. In the specification, a 'Sargent 80 Series' exit device is the only accepted device listed. However, independent alternative products exist that conform to the same performance specification. Look at the pricing between Sargent and an equivalent offset product below: 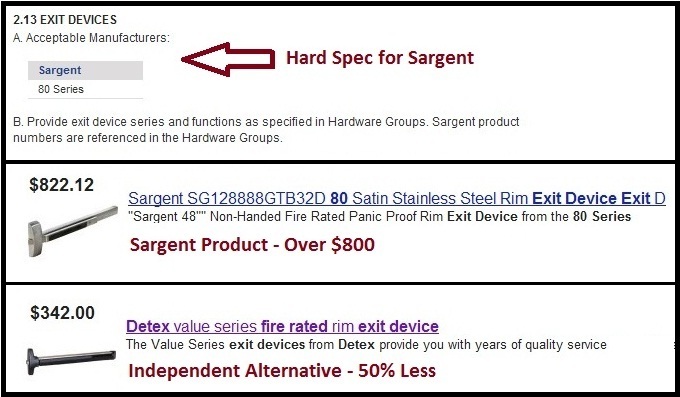 If the specification were written in the 'best interest' of the customer, simple performance criteria of acceptable hardware would be given, e.g: "48 inch, ANSI Grade 1 rated, UL Fire Rated, Non-handed, US32D finish rim exit device". However, condensing that specification to a single sourced product costs this customer a significant premium.

One such program that is publicly promoted is from leading door hardware manufacturer, Allegion [formerly Ingersoll Rand], called "Write a Spec". Depending on project size, latitude to include IR product, and relationship value of A&E, Allegion writes spec at no cost or charges a nominal fee only to deliver a completed specification. Allegion is not alone in the strategy; their largest competitor, ASSA ABLOY, also has a comprehensive 'Specification Writing Service' that seeks to 'compete' for market share in the same way.

The benefit for the manufacturer in the case is that they become the trusted consultant, and the result of their work is nominally reviewed by the A&E who is generally not an expert in this niche.

We solicited the thoughts of independent consultants to gauge the depth of the problem. Their feedback was direct and pointed, stating "...A&Es and consultants who use manufacturers to write their specs are abdicating their responsibilities as design professionals", and "There are a few independent hardware consultants out there, but they have a tough time competing with the factory guys who will do the same work for free. Most architects are operating under a tight schedule and budget, and are happy to take advantage of any shortcuts that the manufacturer can provide."

The matter of 'fair compensation' also comes into play: When the customer enters into contract with an A&E firm to design a building, the cost of developing a Division 8 section is charged to the customer regardless if the A&E has this portion written for free by the manufacturer or not.

When the A&E's elect to 'outsource' specification writing to Manufacturers, end user's best interests can be compromised. In an effort to manage workload, A&Es can simply find who among the large manufacturers is most willing to write the spec at the lowest price. The A&E becomes a 'middleman' in sharing end user requirements with the spec writers, and they may unwittingly poorly engineer or specify equipment because the manufacturer sees an opportunity to sell product.

Ultimately, if end users are fully aware that their A&E is subcontracting out parts of their design to bidders, so be it. However, we suspect that this often is not the case. At the very least, we hope this post helps expose end users to this potential risk.

Top Maglock Provider Warns Against Using Maglocks on Nov 21, 2017
Do not buy my company's product. It sounds strange indeed, but a senior...
The New $2 Billion Access Giant: dorma+kaba on May 01, 2015
The plan to merge two second-tier door hardware and access control companies...
Allegion Releases Engage, Assa Aperio Competitor on Oct 29, 2014
Wireless locks are one of the fastest growing segments of access...
Comments : Subscribers only. Login. or Join.