Manufacturers Sound Off on ONVIF

ONVIF has achieved massive adoption amidst significant criticism. The most vocal critics are typically from manufacturers who deal with ONVIF most directly.

The results surprised us:

Overall, most manufacturers are positive about ONVIF. Indeed, their comments show that, in a fragmented market like surveillance, ONVIF has become a useful tool to access more jobs, more projects, more busiess. 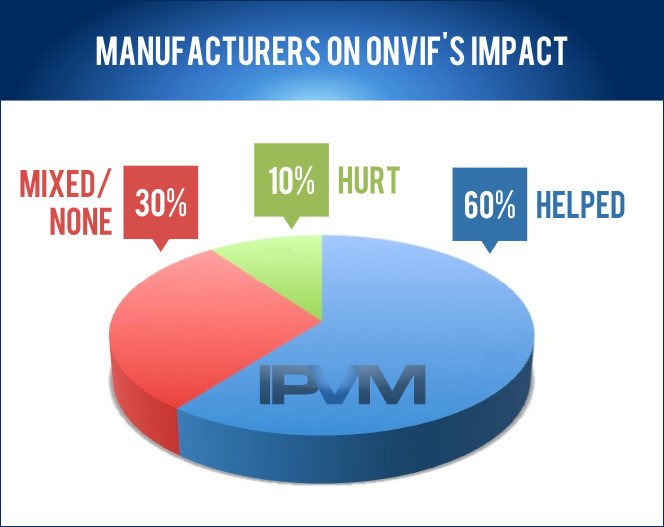 Not surprisingly, camera manufacturers, especially smaller ones, are overwhelmingly positive about ONVIF, with comments including:

Even from their own perspectives, ONVIF is helping those smaller camera manufacturers become viable across a broader portion of the company.

Perhaps somewhat surprisingly, since VMSes and ONVIF are not as frequently discussed, most VMS companies found ONVIF to be quite helpful for them:

"ONVIF cameras represent less than 5% of total camera utilization, but over 25% of product management and tech support resources. On the positive, it's a relatively efficient way to add low volume camera vendors that would've otherwise required development of a new camera driver."

Another major VMS had an interesting approach to using ONVIF to push their camera partners for quicker, less costly integrations:

"We enforce Profile Conformance submission from all of our prospective ONVIF partners before we even start the certification process. We also require latest official ONVIF Device Test Tool test results"

A significant minority of manufacturer emphasized failed ONVIF integrations as the clear #1 problem:

The second biggest problem expressed was missing features, as ONVIF does not require advanced features to be included: