Manufacturers Sound Off On Milestone's Acquisition

The consensus of manufacturers is that Milestone will be weakened in the aftermath of their sell off to Canon. VMS rivals are especially excited about this turn of events while camera manufacturers are dismayed.

Over 100 manufacturers responded to an IPVM survey request, giving in-depth commentary on what they think will happen and what impact they see on the market and themselves.

Let's start with the camera manufacturers.

Specifically, their worries were around integration speed and depth:

A few camera manufacturers found an upside in that this might impact Axis, noting:

VMS competitors are simply happy, like an early Christmas:

One VMS manufacturer, who had recently been acquired by another giant had an interesting observation of his own:

"When we were acquired, I felt that some of my camera partners started steering business to Milestone because they were one of the few VMS companies without a camera line. Now that they are owned by a camera line, my hope is some of that business will return. So I believe the prospect is good, but time will tell."

Milestone is touting the 'Chinese wall' between themselves and Canon and that they are an independent member, but as one manufacturer appropriately noted:

"Even if Milestone swears they won't step into the customers with Canon cameras, it's not their call anymore, its Canon's."

One manufacturer observed how this reflected a broader industry reality:

"More companies want to capture the entire customer, not just a piece of it. Bottom line, you cannot sell just a piece and survive as overseas competitors run prices down."

A camera manufacturer warned that they will be paying attention to new sales incentives:

"When sales team get incentivized on cross selling (esp. Milestone selling Canon, not so much Canon selling Milestone) will de facto make the Milestone system less open, we will then focus on other VMS solutions."

One manufacturer thought that Axis could move away from Milestone, hurting Milestone more than the other way around:

"All brands except Axis didn't like Milestone, because Milestone was very much connected with Axis. Now Axis (major driver of Milestone) will change strategy and it will affect Milestone."

Many questioned what would happen to Milestone's existing management teams:

We agree with one manufacturer that emphasized that, whatever happens, will likely take time:

"It'll take a company like Canon a full year just to absorb Milestone as it exists today. I'd guess the first things we'll see are signs of them trying to reassure us it's business as usual, then we'll see some extended functionality with Canon cameras. It'll probably 3 years before we really get the slightest idea of what is *really* going to happen."

From our original poll, the consensus of 150 manufacturers (68%) who took it was that Milestone would be weakened: 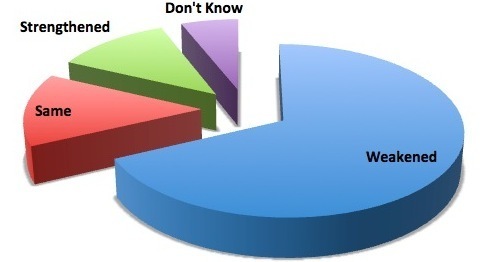