When the main power fails, many believe maglocks must leave doors unlocked.

However, battery backed up maglocks are allowed according to IBC / NFPA code. It just needs to be done properly. We examine the five critical steps for using backing up macklock power correctly:

In this note, we look at what the code actually says about power backups for maglocks, where they might be illegal, and how to do it right when allowed.

When it comes to preventing your maglocked doors from being unsecured when power drops, there are three basic considerations to make:

Surprising to many, national codes do not forbid the use of battery backed up maglocks, despite the dominant 'free egress must always be possible' theme. If codes indeed forbid battery backups, these exceptions are made at the local level. However, their use is allowed if done correctly. Take a look at these passages, covering the full scope of controlled openings regardless of occupancy code:

(For Free Access to these citations, see: Free Online NFPA, IBC, and ADA Codes and Standards)

The fundamental relevant clause cited is:

Loss of power to the listed hardware must automatically unlock the door.

However, the clause does not prohibit the use of backup power. Any electric lock in the direction of egress shall be connected to the fire alarm system and unlock when the system is activated or when power is lost.

The local jurisdiction may have a variation of these 'model codes' that take exception to the rules, so maintaining local awareness of using maglocks or backup power to them is a crucial step, often undertaken when meeting the AHJ. (See the last section in this report.)

Knowing how long a battery will keep a maglock locked is crucial. Maglocks are typically high demand devices that can drain batteries rapidly as the current draw of maglock is continuous, unlike other lock types that only use power when unlocking.

Assume a 12VDC backup system furnished with two 5 amp hour batteries that must keep four maglocked doors (two sets of double doors) energized. The locks alone consume over 1.25 amps per hour, so with a 10 amp supply, doors will fall unlocked in less than eight hours. As such, prolonged outages may still require manual security response, such as guardstaff mechanically locking normally maglocked doors.

Calculating this demand is complicated by other devices that must also be powered in the access system, typically the controllers, readers, and even some RTE devices like PIR motion detectors. The total demand associated with the backup supply may quickly shave the backup power duration to mere minutes in a large system, and ample capacity is a matter of careful design.

Part of designing a battery backup system may be prioritizing specific (perimeter) doors to stay locked, but leaving others (inside) unlocked when power drops. Of course, the decision must conform with facility security management plans, but in the interest of maximizing uptime for critical doors, others may need to be excluded.

However, even if one specifies sufficient batteries, a door controller may not support passing sufficient power for the period desired for battery back up power.

Normally, the maglock will be powered by main power and power will be switched on/off by controller contacts.  However, in cases when main power fails or the access designer connects maglocks as field-powered devices, power may then supplied and routed through the controller itself. Flat out, many controller contacts are not designed or rated to deliver substantial amps for long periods.

While card readers may draw modest amounts of power (ie: 35mA - 100mA), the controller's output relay contacts may not be rated to pass through sufficient amperage to power maglocks (ie: 125mA - 850mA+) 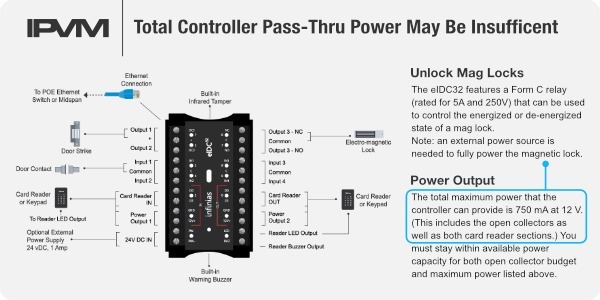 (Note: Later versions of eIDC32 do not include this output power limitation.)

It is because of this limitation, and the way that codes address 'direct interruption' of power to maglocks, that most maglocks are best installed using a separate linear power supply, not powered by pass-thru capacity in the controller. We cover the limitations of pass-thru power budget, especially those with PoE, in PoE Powered Access Control Tutorial.

Batteries vs UPS vs Generators

It is worth noting that batteries are not always the only, or even preferred method, of backup power. UPS devices or batteries, as noted in UPS Backup Power for Security Guide, are the most unitized and least expensive to deploy, but run duration is always a concern. As a result, especially in critical infrastructure or services facilities, the entire building may be backed up by a generator. In this case, the supply is generally much more substantial and runs into hundreds of amps per hour. In these situations, the run length of the backup system may simply not be a realistic problem.

The codes are clear on one engineering point: when the fire alarm activates, all power to maglock must drop. This typically is implemented by tying the linear power supply into the fire alarm via an input loop.  When the alarm is pulled, it sends a signal to the supply that it must cut power to whatever device is wired to it.

Most access panel and maglock manufacturers include these instructions, although they are typically vague on details in how to connect their components so that it happens.  In many cases, the install instructions state 'Installer must wire controller and/or power supply to stop issuing power when local fire alarm is activated', or similar. However, connection plans for doing this are not hard to accomplish if understood graphically.

For example, take this Kisi access control knowledge base schematic that shows this common connection graphically: 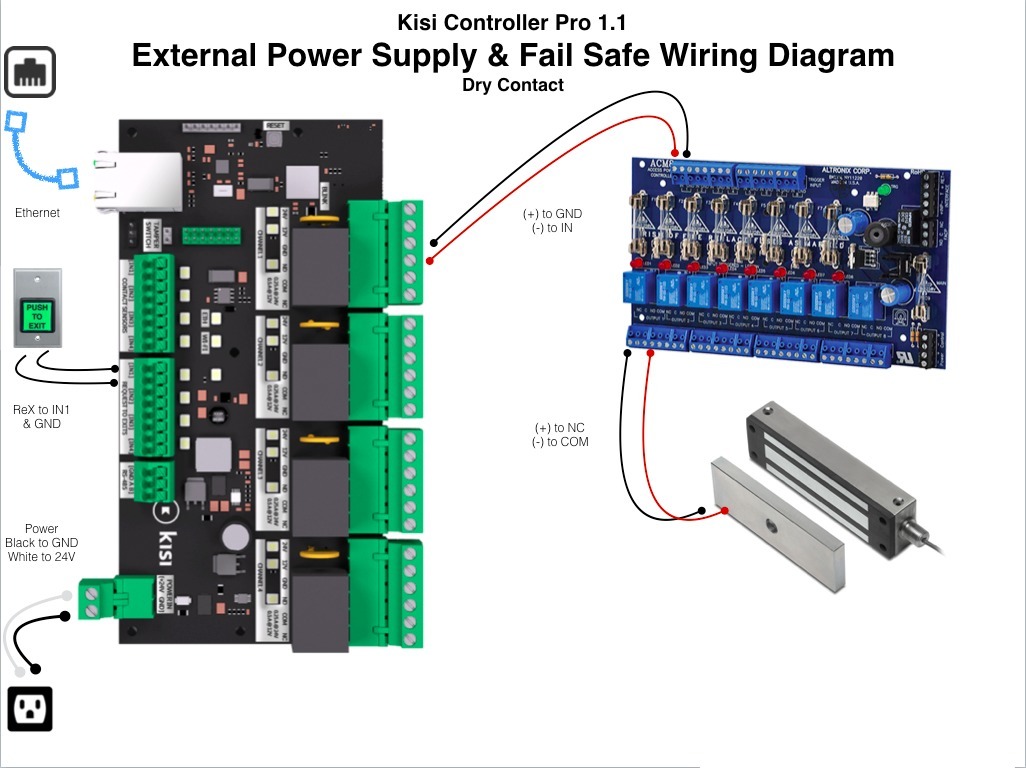 Power to the maglock is directly issued by a linear power supply, that in turn is triggered to drop power when a fire alarm is detected at the controller.  Alternatively, the power supply itself may include fire alarm input contacts instead of connecting to a door controller. As previously noted, however, this power drop may apply to every device connected to the supply: readers, controllers, RTE and more.

This may leave the door unsecured, and the main motivation of 'occupant safety' takes a clear precedence over 'building security'.Therefore, schematically planning out where each device is powered, and under what conditions backup power is supplied, should not be oversimplified.

Even after all this is done, the answer might still be "no".  If the local authority having jurisdiction, or AHJ, does not approve, the idea is dead. There are two basic reasons why local AHJs may not accept the idea:

As a result, some areas outright forbid using backup power of these types of door locks as a matter of local exception and take any decision out of the hands of local inspectors.

These issues describe why maglocks are hated or deemed too difficult to work with by many. While using maglocks may be less expensive or easier to install that other types of electric locks, they are not always the best choice. If the opening design is too restrictive or costly to employ other lock types, then backup power must be supplied to keep doors locked.

Working through a code compliant design and getting approval of the AHJ become a priority for the new access system.

[Note: This guide was initially published in 2014, and substantially revised and updated in 2018.]

Maglock Selection Guide on May 16, 2019
One of the most misunderstood yet valuable pieces of electrified hardware is the maglock. Few locks are stronger, but myths and confusion surround...
Massively Strong Maglock (Securitron) on Nov 16, 2016
One of the market's strongest maglocks has a twist: the 4,000 pounds claimed bond power is not purely magnetic. Securitron's hybrid MM15 maglock...
Comments (1) : Members only. Login. or Join.

Propped Doors Access Control Tutorial on Jan 07, 2020
Doors should keep 'bad guys' out, but a common access control problem is people propping doors open, preventing them from being secure. Even...
Wireless / WiFi Access Lock Guide on Nov 12, 2019
For some access openings, running wires can add thousands in cost, and wireless alternatives that avoid it becomes appealing. But using wireless...
The Access Control Codes Guide: IBC, NFPA 72, 80 & 101 on Nov 07, 2019
For access, there is one basic maxim: Life safety above all else. But how do you know if all applicable codes are being followed? While the...
Lock Status Monitoring Tutorial on Oct 28, 2019
Just because access doors are closed does not mean they are locked. Unless access systems are using lock status monitoring, the doors and areas...
Securing Access Control Installations Tutorial on Oct 17, 2019
The physical security of access control components is critical to ensuring that a facility is truly secure. Otherwise, the entire system can be...
Fail Safe vs. Fail Secure Tutorial on Oct 02, 2019
Few terms carry greater importance in access control than 'fail safe' and 'fail secure'. Access control professionals must know how these...
Maglock Selection Guide on May 16, 2019
One of the most misunderstood yet valuable pieces of electrified hardware is the maglock. Few locks are stronger, but myths and confusion surround...
Access Control Request to Exit (RTE) Tutorial on May 13, 2019
For access controlled doors, especially those with maglocks, 'Request to Exit', or 'RTE' devices are required to override electrified locks to...
Door Closers Access Control Tutorial on May 02, 2019
Door Closers have an important job: automatically shut doors when they are opened, because an open door cannot control access. In this note, we...
Door Operators Access Control Tutorial on Apr 17, 2019
Doors equipped with door operators, specialty devices that automate opening and closing, tend to be quite complex. The mechanisms needed to...

VergeSense Presents People Tracking Sensor on Jun 04, 2020
VergeSense presented its people tracking sensor and social distancing insights at the May 2020 IPVM Startups show. A 30-minute video from...
FLIR A Series Temperature Screening Cameras Tested on Jun 04, 2020
FLIR is one of the biggest names in thermal and one of the most conservative. While rivals have marketed fever detection, FLIR has stuck to EST...
"Fever Camera" Show On-Demand Watch Now on Jun 03, 2020
IPVM has successfully completed the world's first "Fever Camera" show. Recordings from Both days are posted at the end of this report for on-demand...
Cobalt Robotics Presents Indoor Security and Access Robots on Jun 03, 2020
Cobalt Robotics presented indoor security robots at the May 2020 IPVM Startups show. Inside this report: A 30-minute video from Cobalt...
Dahua Sues Ex-North American President, Says Legal Typo on Jun 03, 2020
Dahua's former North American President Frank Zhang claims he is owed almost $11 million but Dahua counter claims it is just a "scrivener's error",...
Smart Entry Systems Presents Cloud Multi-Tenant Access Control on Jun 02, 2020
Smart Entry Systems presented Cloud Multi-Tenant Access Control at the May 2020 IPVM Startups show. Inside this report: A 30-minute video...
Genetec Drops Support for Dahua and Hikvision on Jun 01, 2020
Genetec has dropped support for Dahua and Hikvision, citing US blacklisting and ONVIF conformance blockage, the company informed partners in an...
Dotty "Hot Or Not" Elevated Body Temperature App Tested on Jun 01, 2020
What if you could take an existing phone or tablet and transform it into "fever camera"? That is what DottyAR is doing with their strangely named...
Optris "Fever Screening Systems" Examined on Jun 01, 2020
German manufacturer Optris has been building temperature measuring instruments for industrial manufacturing for over 15 years, and thermal cameras...
Fever Camera Sales From Integrators Surveyed on Jun 01, 2020
Fever cameras are the hottest trend in video surveillance currently but how much are integrators selling them? 220 integrators answered the...