In a recent security magazine 'article', ICE claims a superior cable box that will "save integrators time and money". Is this marketing hype or is there something to this claim? In this note, we examine the key features of boxed cabling vs spools, providing recommendations on the best options and tradeoffs for cable dispensing.

Boxed cable is handy for quickly installing shorter single runs of cabling. The rectangular box won't roll around in the back of a van like a spool, is fairly lightweight at ~30lbs. full and can be carried with hand hole slots. Also, boxed cable is easier to stack and store in a van or warehouse than spools of cable.

Here's a look at a box of generic CAT6 cable. 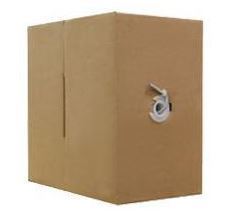 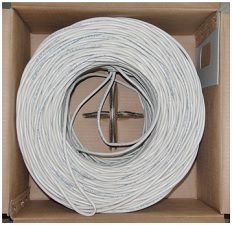 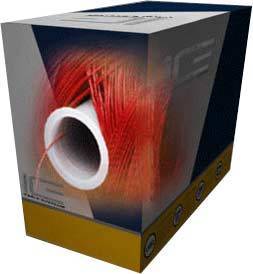 As compared to generic "no name" cabling, at first glance there appears to be merit to that claim.

There are many cable manufacturers, but some bigger names include: 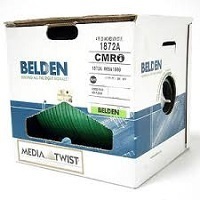 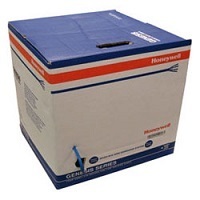 Boxed cable has its drawbacks. Unless the box contains an internal reel or spool, it will occasionally kink or knot in the box regardless of how the cable is wound, but a larger opening does help with pulling the cable from the box.

With boxed cable, it is nearly impossible to immediately tell how much cable is left in the box without picking it up or looking at the markings on the cable. Many times, an installer in a hurry arrives on a job site to find their box of cable that they thought was full to be nearly empty and has to make a run back to the shop or to a supplier for more cable, which costs time and money.

Just about every manufacturer includes a footage marking on the cable, some include ascending and descending footages to specifically show how much has been used and how much remains in the box. Others also include descriptions of the cable and additional letters and numbers where an installer can use a Sharpie to easily mark the cable numbers.

Is ICE Cable worth it?

For comparison, we contacted a distributor and found that the price for ICE cable is ~$140 for a box of non-plenum CAT6 cable. Another major brand with a similar wide mouth opening sells for ~$110-120 dealer price from a national alarm supply houses.

Note: When it comes to cable prices, it is important to note that copper is a commodity causing prices to fluctuate sometimes greatly, distributor's discounts to integrators can vary, and bulk purchases can usually obtain additional discounts. Cable costs also differ substantially depending on the rating of the cable: non-plenum, plenum or riser.

Using Spools Instead of Boxes

For larger projects where multiple cables are being pulled at simultaneously, the spool is still the most popular delivery method. Rolling wire spool carts make managing the cabling easier and can range from simple single-spool carts to large rolling carts carrying many spools.  This is especially handy when pulling non-composite access control cabling where the card reader, exit device, door switch and locking device all require separate individual cables. 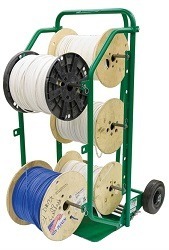 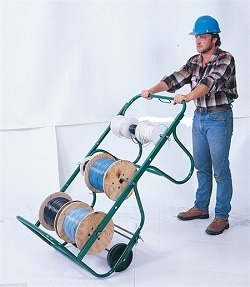 For simple camera installations, many installers prefer single spools as opposed to the boxed cable and put them on a compact folding cart or simply take an A-frame ladder and stick a short pice of rigid conduit through the spool and support it from the ladder rungs for pulling cable. 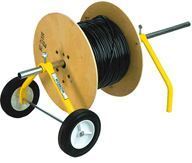 Although spools and carts are bulkier, harder to handle and store, cable flows from the spool freely without kinking or knotting and installers can quickly see much cable is left at a glance. Most manufacturers offer their cabling in either boxes or spools.

Some wire manufacturers such as Windy City Wire have taken a hybrid approach of boxes and spools, taking advantage of the benefits of both methods. Their system uses equal depth boxes which all contain internal free-spinning reels and the boxes are ganged together on custom rolling carts designed for their boxes.

Choosing what brand of boxed cable or spools to use many times comes down to cost, size of the project, number of cables to be pulled, and the installer's personal preference. There might be some labor savings, but in most cases it is not a significant difference. We have examined several different methods, but essentially they are just differences in packaging. It's hard for a wire manufacturer to claim that their cable is better then their competitor's, so they focus on touting the coloring, labeling or packaging. It's essentially the same as comparing mayonnaise from a jar versus squeeze bottle, what really matters is on the inside. The focus should be given to choosing the proper cable for the job rather than the package it comes from.