Manufacturer illumination ratings cannot be trusted, so you should use a lux meter and test yourself. Some people, though, are too lazy to get their own lux meter or want to use an application that can be loaded on their smartphone. However, this begs the question - How well do these applications work?

We tested 2 iOS and 2 Android mobile device apps named "Lux Meter" and "Light Meter". You can find these apps on either the Android Play or iOS App stores respectively.

The only paid app was the iOS Light Meter for $1.99 USD. All other apps were free.

In this report, we:

Below is an image compiled with scenes used for the test. We tested in these scenes because they offered us a wide variance in lux measurements. The numbers displayed in this image is the Extech Light Meter measurement for each scene.

Below is a chart showing our results. None of the apps were reliable in low and bright light scenes, but were more accurate in even-lit indoor scenes.

Below is an image of the "Light Meter Apps" next to the Extech light meter. 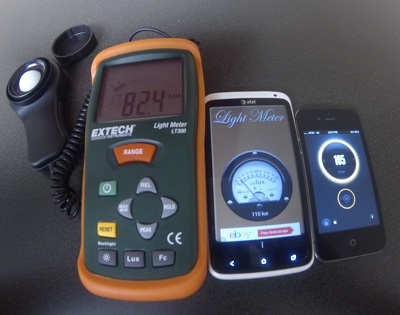 Below is an image of the "Lux Meter Apps" next to the Extech light meter. 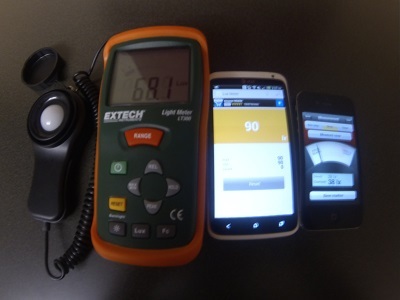 It was easy to obtain measurements with all devices, since the user simply has to press a button to measure light. However, it is important that the user does not get in the way of the camera, since doing so could skew results. Android used the front or "face" camera, with no ability to switch to the better camera with a larger sensor on the back for more accurate light measurements. Both iOS apps allowed the use of either front or back camera. Android measurements seemed to go up or down in segments, meaning the measurements would jump from 160-220-260-320 lux etc., while the iOS apps offered more precise measurements (225-226-227-228 lux etc.)

As stated earlier, extreme lighting scenes are critical in surveillance, and we cannot recommend one app over another in these scenes. However, as a result of our testing, the iOS apps are stronger in terms of usability and overall indoor measurements. Still, we strongly recommend users to use professional grade light meters (such as the Extech LT300 light meter ( ~$150 USD) for such extreme lighting scenes.