Reusing coaxial cable for new IP cameras can simplify and save on upgrades. However, the devices that enable this, Ethernet over Coax adapters, have traditionally been quite expensive. Last year, Altronix's new EoC units offered significantly reduced cost. Now a fairly unknown manufactuer EnConn has released an even lower cost unit with PoE support normally found on much more expensive models. In this note, we review the features of this new model and compare to existing products from competing manufacturers, such as Altronix and Veracity.

The EnConn Mini-Power [link no longer available] is a coax over Ethernet adapter with the following capabilities: 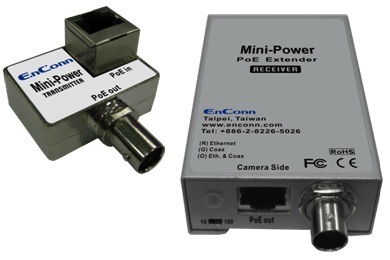 The Mini-Power is available now and may be purchased directly from EnConn for less than $100 per send/receive pair.

EnConn's Mini-Power is less expensive than any EoC adapter we have seen from major manufacturers. Altronix's eBridge, generally recognized as least expensive, sells for about $200 per pair. Aside from price, EnConn has an advantage over Altronix due to its PoE support, which the eBridge does not offer. Lack of PoE support may be problematic when using many cameras, as manufacturers have begun to abandon low-voltage power options in cameras in favor of PoE-only operation.

Aside from Altronix, manufactuers such as Nitek [link no longer available], Comnet, and Veracity typically sell for about $400 per pair or more, and support PoE up the coax. These models may support greater distances, as well. Veracity's HighWire PowerStar, for example, claims full-duplex 10/100 Ethernet at distances up to 1,600', more than triple EnConn's specified distance. This is probably a secondary concern, however, as most analog camera runs which would be reused are 500' or less, with average runs likely below 200'.

Overall, the Mini-Power continues the trend of EoC prices falling in the past 1-2 years, making its adoption more likely by those moving from analog to IP video systems. However, at under $100 per pair, we believe the Mini-Power will likely see some use. That being said, some may still prefer better-known brands such as Veracity, due to their longer history and larger installed base.

As with any product priced well below the mainstream, users should exercise caution when planning to use EnConn's EoC product. Testing is strongly recommended to ensure the product meets bandwidth and distance needs. At this price, purchasing evaluation units is relatively inexpensive and low-risk, and if suitable, EnConn could reduce EoC costs significantly.