In our international integrator survey, respondents raised numerous concerns about low quality surveillance RFPs. In this report, we explain and examine their specific concerns.

Request for Proposals (i.e., RFPs) are a common method of purchase solicitation, favored by government, institutional, and municipal entities looking to buy large or complex systems. When a lot of money is spent on systems, more often than not, RFPs are issued. The goal, at least theoretically, is to find the best possible solution at the lowest available price.

For background, see our series of reviews on RFPs, examining good and bad aspects of them.

We frequently hear industry professionals raise concern about the effectiveness and fairness of RFPs, and by extension, the security consultants and specifiers you create those proposals. Indeed, this has been a major element in heated discussions we have had about security consultant conflict of interest and the Axis Corruption Cruise.

Given the interest in this topic, we asked 100 integrators the following question:

Here are the key findings from the results:

Here's what it looks like graphically among the integrators who were familiar with RFPs: 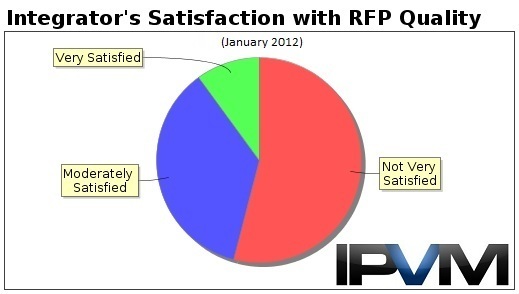 Many integrators expressed dissatisfaction with this practice.  Here are a selection of their comments:

Integrators expressed frustration at the lack of product knowledge reflected in the specification package.  This lack of knowledge can result in an 'impossible specification' to meet or drive up system costs due to unweildy integration.

The RFP process is designed to solicit 'apples-to-apples' proposals, and permit a cost based comparasion. When the specification is poorly written, some responders will 'troubleshoot' discrepancies in the design and submit those costs as part of the bid quotation. Other repondents will choose not to consider solving design problems 'up front', and will wait until the project performance phase to address gaps via 'change order'. In this case, the RFP specification has not satisfied its purpose of clearly defining the proposed project.

The final outcome of the process has been previously determined.

Many integrators suggested that the RFP process is an exercise in semantics, simply a matter of lawful process in closing 'someone else's sale'.

Integrators can spend significant dollars preparing proposals, and some proposals require bid bonding. The true cost of resonding to an RFP can be significant.  When integrators are asked to engage in a process where the outcome has already been determined, it reinforces the hesistation to participate in these activities.

RFPs are written for specific products that only a few vendors can provide.

Integrators expressed dissatisfaction with the tendancy of RFPs to 'write-in' specific equipment with no alternatives. This limits competition not only in terms of product, but also from the field of potential integrators.

This complaint is certainly not unique only among businesses responding to surveillance RFPs, and is often cited as a general disadvatange to the method of RFP Procurement.

A notable niche, 10% (8/84) of respondents, said they had 'very satisfactory' experiences with RFPs. The approach of these respondents was typically to understand and address the opportunity behind the RFP rather than focusing on only complying with the technicalities of the response. They indicate that RFPs prequalify a customer's desire for a new system, and that through the strength of initial response, these integrators are able to form a consultative sales relationship with the solicitors.

Often, RFPs intend to 'level the playing field' by specifiying performance parameters, but integrators view the people writing the RFPs often as uninformed, wastefully specific, or otherwise work to accomplish the very opposite result of the unbiased, clean result the process intends to provide.

Some integrators choose not to repsond to RFPs at all, instead opting for 'consultative sales' based on an in-depth study of customer needs. For the customer, this approach often limits competition, but results in a much more fleshed-out proposed design.  Unfortunately, this also discourages fair competition for these opportunties, and these 'public funded' opportunities become vulnerable to collusion.

Video Surveillance Statistics Directory Vol 2 on Mar 18, 2012
In this report, we aggregate and present numerous statistics about how...
Comments : Members only. Login. or Join.