IR illumination has increased in popularity, with built in IR becoming a common feature in low-cost models. But when low light needs exceed the relatively short ranges of these cameras (usually 100' or less), users have historically been left with few options aside from high-priced external illuminators. And for those cameras without IR, even for short range, the cost of those illuminators can now be more than the camera itself.

However, a new crop of low-cost illuminators has hit the market, claiming wide illumination angles and long ranges (400'+) at rock bottom prices, under $100 as well as short-range models for under $20.

We bought 5 of these IR illuminators from Amazon for a total cost of under $200, shown below:

We put them to the test and see how the performed in these categories:

This chart summarizes our key findings from this test:

Contrast this with our 2010 low-cost illuminator tests, in which most models greatly overspecified their range.

An illuminator's specified angle of illumination rarely reflected upon its actual performance. With the exception of a single illuminator, models varied significantly from spec, with two narrower than claimed, and two wider.

These low-cost illuminators are powered via 12VDC and turn on/off based on an internal photocell. They do not contain any advanced features found on some higher cost illuminators, such as relays for switching camera day/night mode, variable diffuser options, or network connectivity.

We purchased all five of these illuminators from Amazon.com, with prices ranging from $15-70:

These prices are a fraction of what professional illuminators cost. For example, a Raytec Raymax 25 (RM25-50) with a 50 degree angle of illumination sells for ~$280 online. However even with this narrower angle of illumination, its range is limited to about 50', only a third of the distance of the lowest cost model in this test (IR3, $15).

The illuminators tested here provide a simple means to add illumination to low light scenes at prices much lower than professional grade illuminators, and at ranges beyond those of most integrated IR models.

However, we strongly suggest users test these illuminators in place with their chosen camera, as angle and range of illumination vary drastically from spec, and may not be sufficient for the application.

The image below shows the illuminators side by side. LED counts and quantities varied from 198 small LEDs to 3 large, with varying range and angle of illumination.

These illuminators have none of the bells and whistles found in more expensive commercial models. They are powered by 12VDC only, and controlled only via an internal photocell. They provide no configuration of light levels at which they turn on/off, nor power adjustments found on many higher priced models.

Additionally, there are no options for adjustable angle of illumination, PoE power, or web accessibility, found on some high end models.

This video reviews the construction of some of the illuminators:

Some users may prefer to use PoE or 24VAC power for these illuminators instead of 12 VDC, as it suffers from greater voltage drop issues than higher voltages.

All illuminators tested reached or exceeded their specified illumination distance. Those specifying a range instead of a single number, the IR130 and IR110, reached the low end of their specified range, not much further.

The three smaller illuminators all illuminated out to about 150'. However, the coverage pattern varied from 45-60 degrees, with some hotter in the center than others.

This video show our subject walking from over 200' to the camera location using the IR 3 (3 LED) illuminator. Illumination becomes apparently midway between our first and second marks, ~150'.

The illuminators tested specified angles of illumination varying from 45-90 degrees. However, we found only one of these specs to be accurate (the 60 degree U06R).

The larger illuminators with high numbers of small LEDs (IR130/IR110) were much wider than specified. Both covered an approximately 90 degree angle, vs. 45 and 60 degrees specs, respectively. This is shown using the IR130, below. 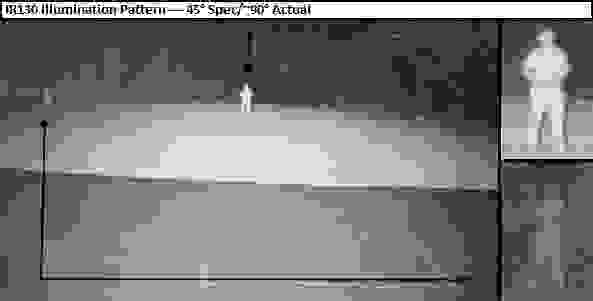 However, the smaller models using 3 or 4 LEDs (IR3/U03R) overspecified their angle of illumination. The IR3 specified a 70 degree angle, but had the narrowest pattern of all illuminators tested, ~45 degrees. The U03R specified 90 degrees, but covered only about 60. 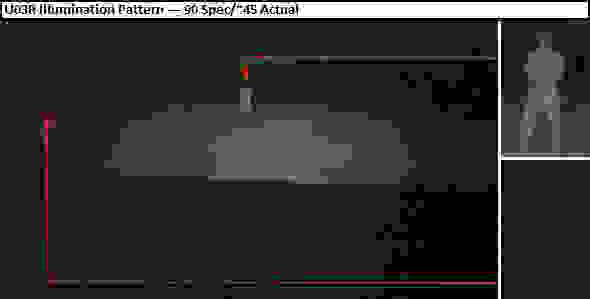 Regardless of which illuminator was used, all models produced some risk of overexposing subjects as they approach the cameras. Cameras which are generally better at handling varying light, such as the Axis Q1615 and Samsung SNB-6004, are able to compensate for the added IR light in the scene, while others, such as the Arecont and Hikvision cameras below, are unable to adjust. 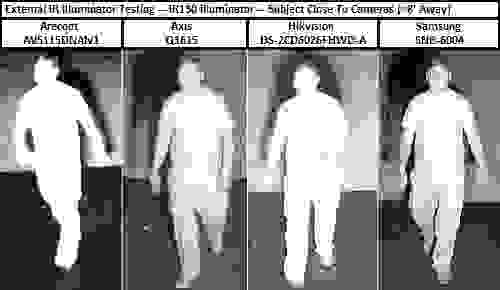 Using the lower powered U03R, overexposure was not as severe, though still an issue at close range: 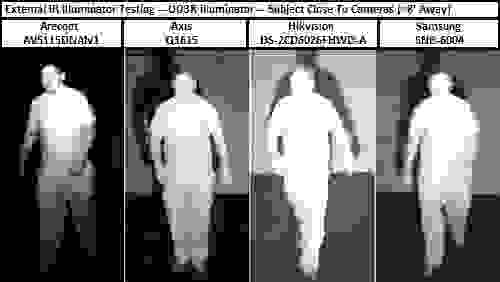