Best Buy, Home Depot, and Lowe's dropped Lorex (Dahua) products after IPVM and TechCrunch reached out to the retailers about them selling products from a manufacturer deemed a threat to US national security as well as being sanctioned for human rights abuses. 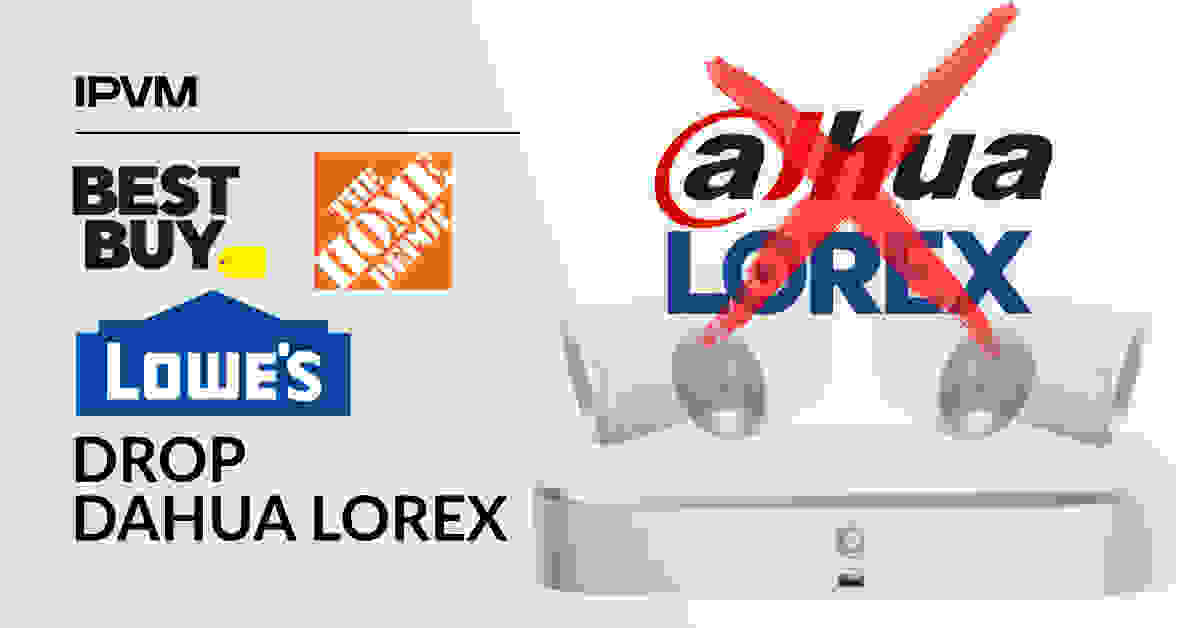 In this report, we examine the issues involved, share responses from the companies involved including Best Buy, Dahua, and Home Depot as statements from US Representative Claudia Tenney (who co-sponsored the FCC bill that passed the House last week) and US Senator Marco Rubio who called Lorex "just Dahua by another name" amongst their remarks to IPVM.

IPVM is co-reporting this story with TechCrunch, see the TechCrunch article: US retail giants pull Chinese surveillance tech from shelves 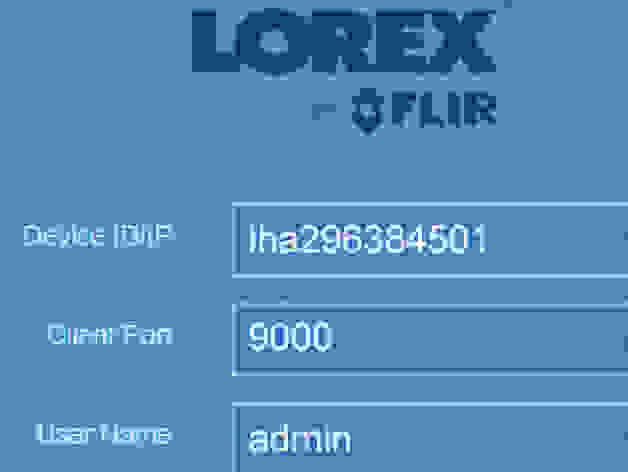 Lorex is a wholly-owned subsidiary of Dahua that makes video surveillance products targeted to the home and SMB market, sold through big box stores in North America. Dahua acquired FLIR SMB and Lorex from FLIR in 2018 for $29 million USD, at that time the businesses were doing over $100 million in revenue.

When FLIR owned Lorex, the products prominently displayed that they were by FLIR both on the boxes and inside the user interface.

Today, Lorex products make no mention of being owned and produced by Dahua. However, Dahua told IPVM that they were "fully transparent with our retail partners".

IPVM and TechCrunch reached out specifically to Costco, Sam's Club, Home Depot, Lowe's, and Best Buy because they were listed as national retailers by Lorex on Lorex's website. 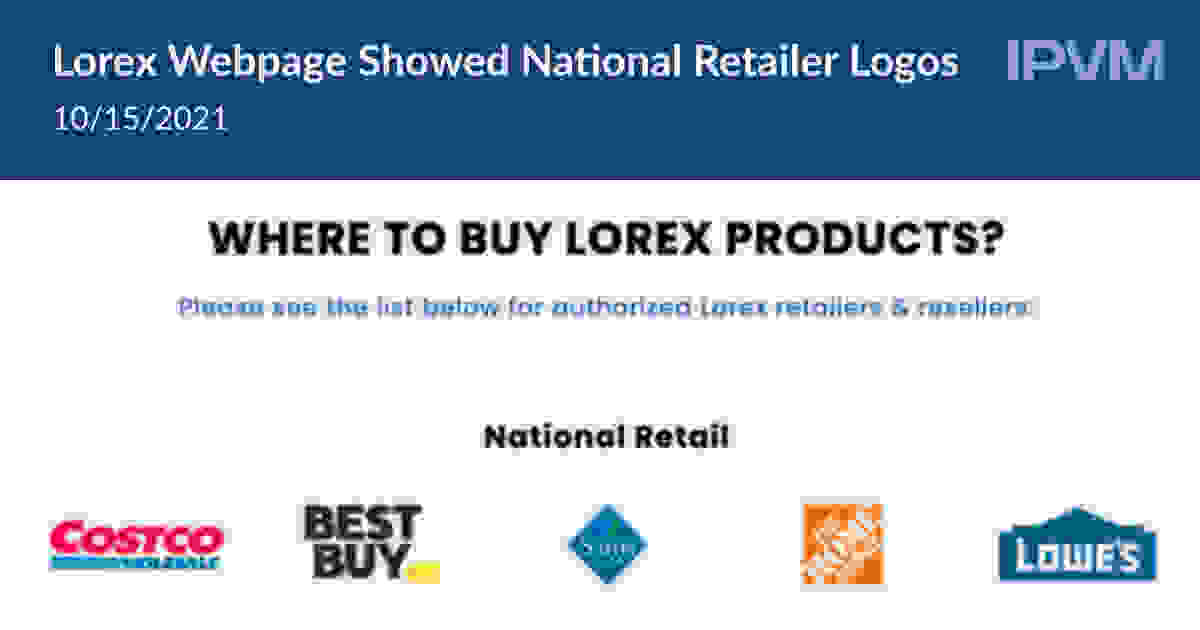 When IPVM began investigating this story two weeks ago, all 5 retailers were selling Lorex on their websites.

Home Depot and Lowe's pulled Lorex products off of their websites on Tuesday, October 19, 4 days after IPVM and Tech Crunch reached out about Dahua/Lorex's cybersecurity and human rights concerns. Best Buy confirmed to IPVM via email that it is ending its relationship with Lorex.

Home Depot explicitly cited ethical concerns in their reasoning for removing Lorex from their website:

We’re committed to upholding the highest standards of ethical sourcing and we immediately stopped selling products from Lorex when this was brought to our attention.

The current Home Depot Lorex page shows there are no Lorex products available: 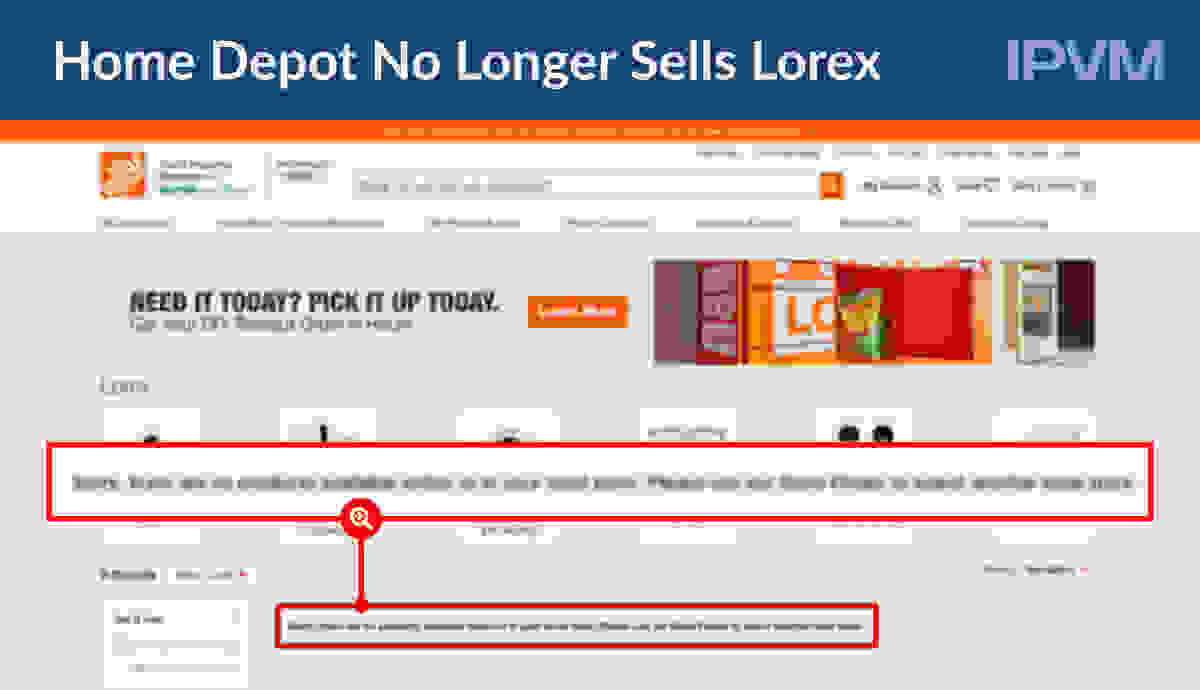 Best Buy confirmed to IPVM via email on Friday, October 22, 2021, that "it is discontinuing its relationship with Lorex."

However, Lorex cameras are still up for sale on Best Buy's website, though, given Best Buy's statement, this may be removed shortly. We will update accordingly.

Lowe's did not respond to any communication from IPVM/TechCrunch but similarly pulled Lorex products off its page after being contacted by IPVM and TechCrunch. 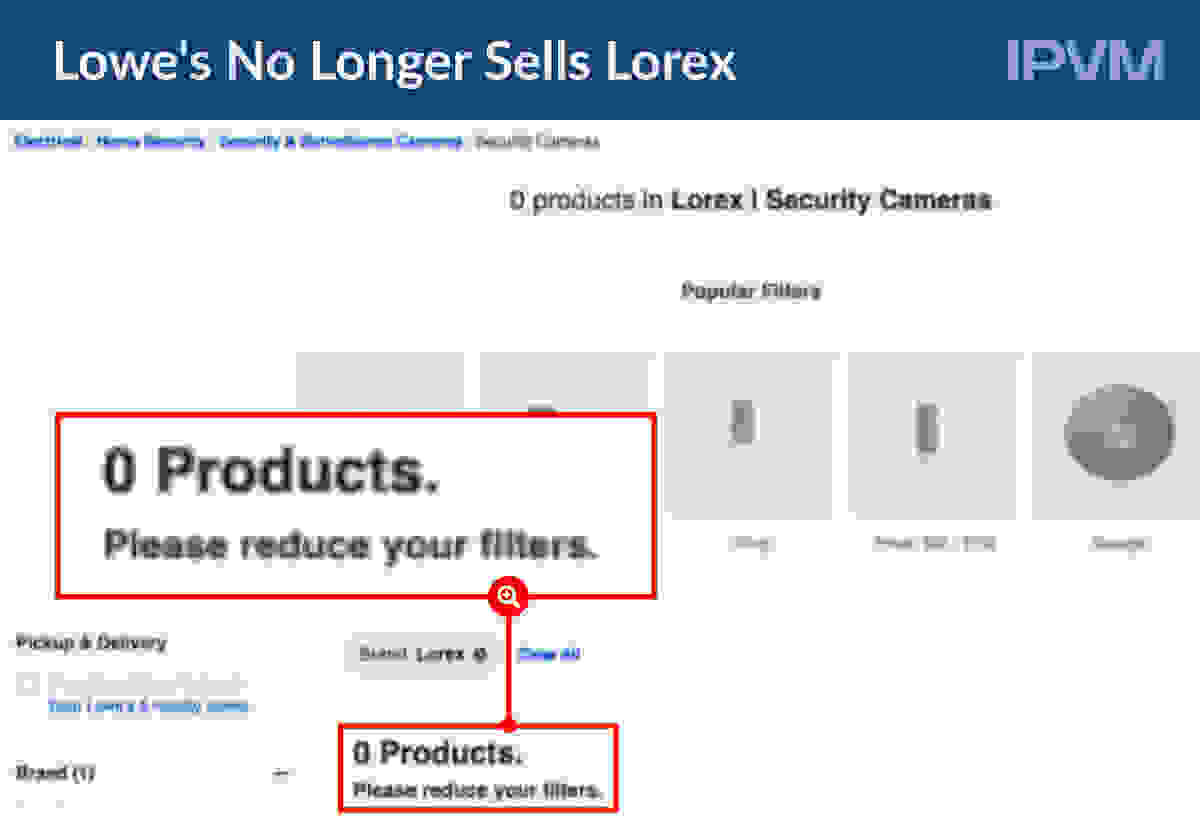 IPVM has contacted Lowe's to confirm the reasoning for Lorex products no longer being sold at Lowe's. However, IPVM has not received a response.

On October 19, 2021, before Home Depot and Lowe's removed Lorex products from their websites, Dahua responded to IPVM's concerns about Lorex being sold in North America commenting that Lorex is "fully transparent" with its retail partners about Lorex's ownership:

Lorex is fully transparent with our retail partners about our ownership and have been since the acquisition in 2018. We are also regularly in touch with representatives of those companies in regard to various regulatory and compliance issues, including addressing any questions they have about the FCC’s proposed rulemaking.

Lorex has operated in the North American market for more than thirty years, including the past three years since becoming an indirect wholly-owned subsidiary of Dahua Technology. Since its founding, Lorex has offered retail and commercial customers in this market with leading security products and solutions. Our focus as a company is on bringing together the best technology in the world, based on the design and specifications set by our North American-based teams. This includes products from Dahua, as well as those sourced from other providers. Our model of integrating technologies from third-parties and delivering a value-added final product for end-user customers is one of the most widely used in the world across sectors including consumer electronics, IoT devices, automotive and more.

No Dahua Response after Home Depot and Lowe's Pull Lorex

However, the day after IPVM received Dahua's response, Home Depot confirmed that the company had pulled Lorex off of its website, and IPVM discovered that Lowe's did too, although Lowe's did not inform IPVM it was doing so.

If and when Dahua responds, IPVM will update this report accordingly.

Representative Claudia Tenney, who co-sponsored the Secure Equipment Act which recently passed the House, commented to IPVM on the dangers of US companies selling Lorex and Ezviz to unwitting Americans: 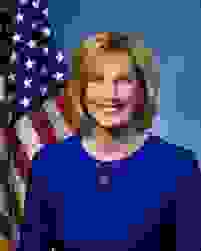 No company in the United States should be accepting or selling any products that could potentially allow Chinese surveillance on millions of unknowing Americans. Corporate America must realize that imported goods from China are no longer limited to benign, inexpensive consumer products. Today, the Chinese Communist Party is embarking on a drive for tech-enabled global hegemony and American companies must not provide support for this effort. The U.S. government should enforce our consumer protection and telecommunication security laws and hold to account any firm that imports re-labeled prohibited goods and sells them to unwitting consumers.

Dahua and Hikvision have been directly involved in perpetuating human rights abuses against Uyghurs in Xinjiang, as IPVM has previously reported. From surveillance projects worth over $1 billion that Hikhua has won directly in Xinjiang to Dahua providing "real-time Uyghur warnings" to PRC police, Hikhua's involvement in human rights violations is clear.

The US government sanctioned Dahua and Hikvision in 2019 by adding the companies to the US "entity list" specifically stating "these entities have been implicated in human rights violations and abuses in the implementation of China's campaign of repression." The direct impact of the entity list meant US companies were not allowed to sell to Dahua and Hikvision. Indirectly, the US government considered any transactions of entity list companies to "carry a 'red flag'".

Although Lorex and Ezviz are not on the entity list, Senator Marco Rubio, who introduced the Secure Equipment Act alongside Senator Ed Markey, and has been vocal about Dahua's human rights violations, told IPVM that Lorex should be added to the entity list: 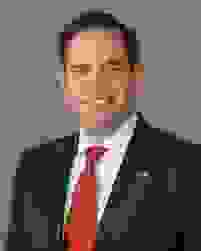 We cannot allow Chinese companies complicit in human rights abuses to dodge American penalties and bans. Not only are Americans’ personal data at risk, but this same company is powering modern-day slavery and concentration camps in Xinjiang. President Trump was right to add Dahua Technology to the Commerce Department’s Entity List, and President Biden should do the same for Lorex, which is just Dahua by another name.

Dolkun Isa, the President of the World Uyghur Congress, also called out US companies' complicity in human rights abuses in his comment to IPVM: 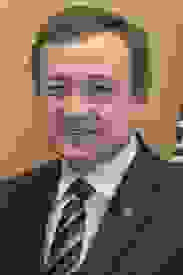 It is with great concern that we observe foreign companies being complicit in the Uyghur genocide. Dahua is directly connected with the Chinese Communist Party, as it provides surveillance technology used to monitor millions of Uyghurs in East Turkistan. The United States Government has taken a series of meaningful actions regarding the human rights situation in East Turkistan, including bans on forced labour products and adding Chinese companies to the US entity list. In this context, it's unacceptable that there are still American companies directly helping further the repression.

Costco continues to sell Lorex cameras on its website, despite IPVM and TechCrunch explaining the cybersecurity and human rights concerns with Lorex products. Currently, 10 various Lorex kits are available to purchase online. 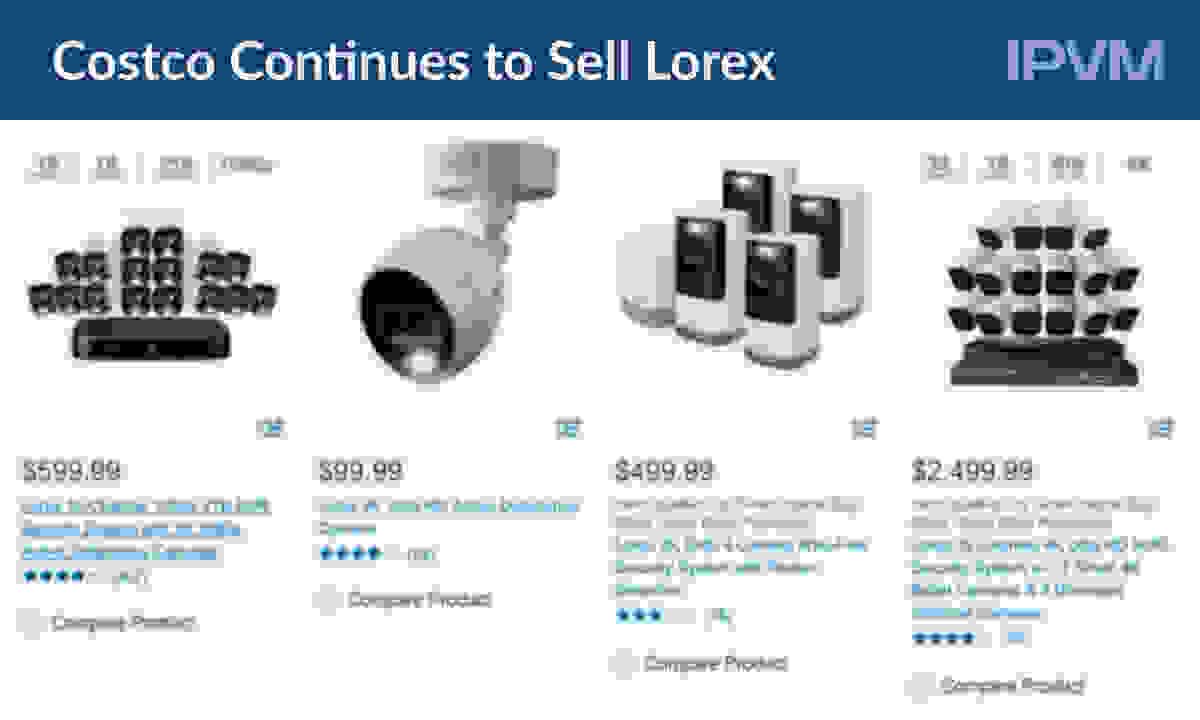 Costco's Lorex 4K Ultra HD 8-Channel Kit with 6 Cameras, currently sold in stores, comes with a Costco concierge service label printed directly on the top of the box. This packaging, exclusive to Costco, shows that Costco actively negotiated with Lorex to sell this product online and in its warehouses. 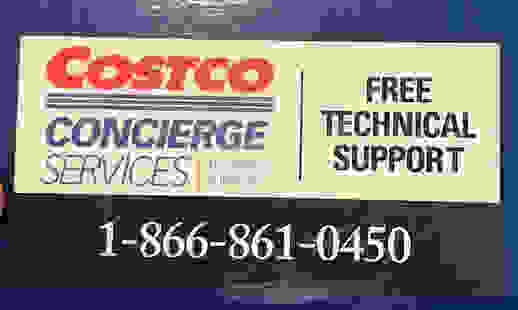 Costco has not responded to our request for comment. 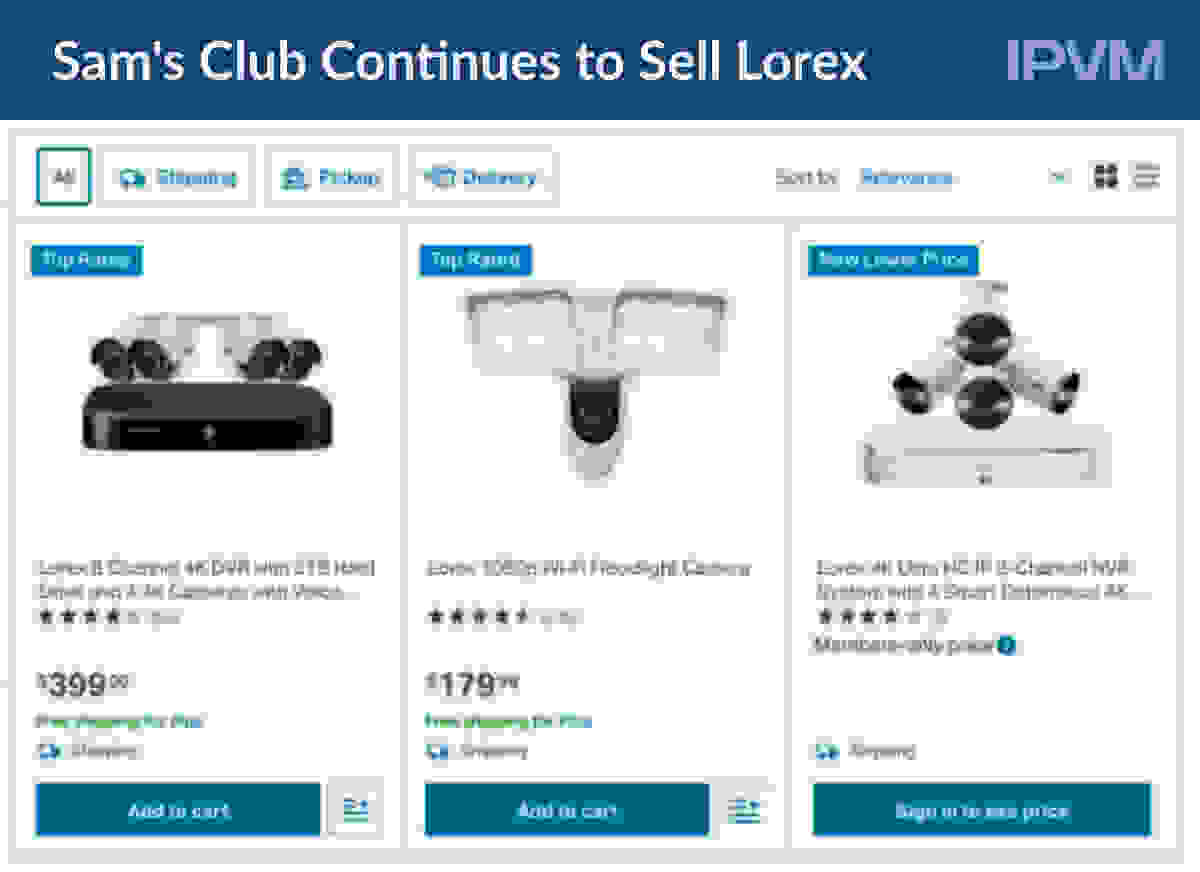 Sam's Club has not responded to our request for comment.

After IPVM reached out to Dahua about its Lorex sales through the national retailers, Lorex redesigned their "authorized resellers" page, and combined the "national retail" section with the "regional and online retail" section, removing the logos of the 5 stores we had contacted.

Now, the Lorex "authorized resellers" page looks like this, screencap below: 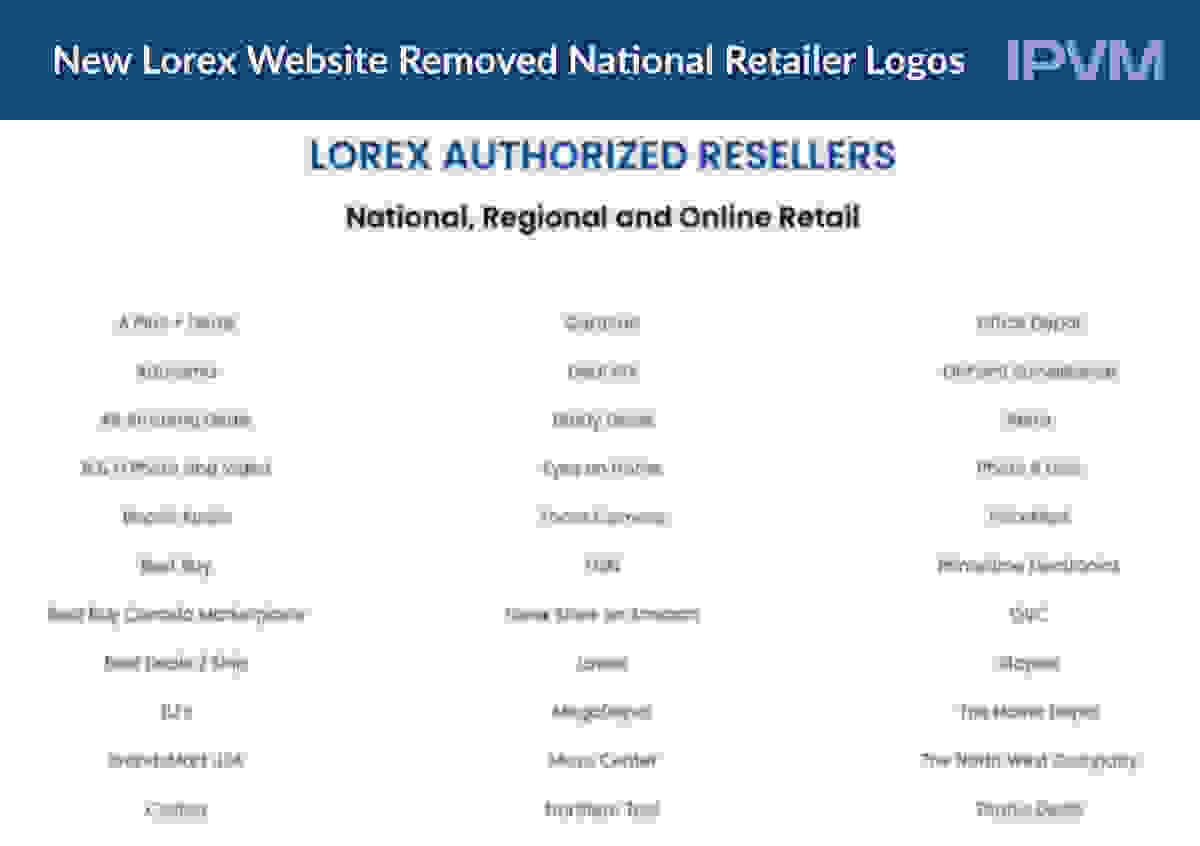 All 5 national retailers are still included in this list, except for Sam's Club. However, Sam's Club is still selling Lorex cameras on its website. IPVM reached out to Dahua asking why Sam's Club was left out of this list, even though it continues to sell Lorex. If and when IPVM receives a response, we will update this report accordingly.

We reached out to the 5 national retailers but have not contacted other regional or online ones.

IPVM is also investigating Hikvision Ezviz sold in the US and will report on our findings in the coming weeks.

Human Rights Groups Call For Dahua Resignations / Terminations on Dec 15, 2022
4 human rights groups have published open letters to Dahua and Lorex calling...
Lorex Revenue, Profit and Dahua Sell-Off Terms Analyzed on Dec 06, 2022
Dahua's surprising move to sell off Lorex raised various questions about the...
Dahua Selling Off Lorex To Taiwan Company on Nov 28, 2022
The day before the US FCC announced prohibiting new Dahua authorizations,...
Costco / Lorex Deceives With USA "Distributed", No Country of Origin On Box, Dahua Says "Error" on Nov 02, 2021
Many Lorex kits sold at Costco stores have a prominent "US" distribution...

This is a great start. There are SO many OEM's that use Dahua and HikVision products as their foundation. Although the Human Rights issue is critical, for those who are not political, the Network Security issues associated with the products and the chipsets in the product should cause anyone great distress. America and the rest of the world have had their network security compromised for years, and retailers (who have the most to risk) are carrying the very manufacturers and products that are responsible.

Perhaps the FCC BAN will wake them up.

Perhaps there is an attorney who could comment on the potential liability that Costco or Sam's might have if a dental or medical office bought a DIY camera system for use in their offices that was placed on their network, and ultimately resulted in HIPPA privacy violations as a result. The serialization functions come defaulted on in most of the retail products. There have already been many hacks with the products over the last few years. Hard for the corporate buyers at Costco and Sam's to not know they are selling products that place their clients at risk.

When FLIR owned Lorex, the products prominently displayed that they were by FLIR both on the boxes and inside the user interface.

Today, Lorex products make no mention of being owned and produced by Dahua.

To be fair, when FLIR owned Lorex, the cameras were still produced by Dahua, and FLIR made no mention of that fact on the product that I’m aware of.

Where are all the integrators that blame IPVM?

Did they pull them over concerns over human rights abuses, a federal restriction or because IPVM and TechCrunch notified them?

As the report makes clear, they pulled them after we asked them, even though the FCC national security threat list has been public for 7 months and the sanctions were a few years ago.

Why these companies decided to pull them now, we cannot be certain because they have not explained. 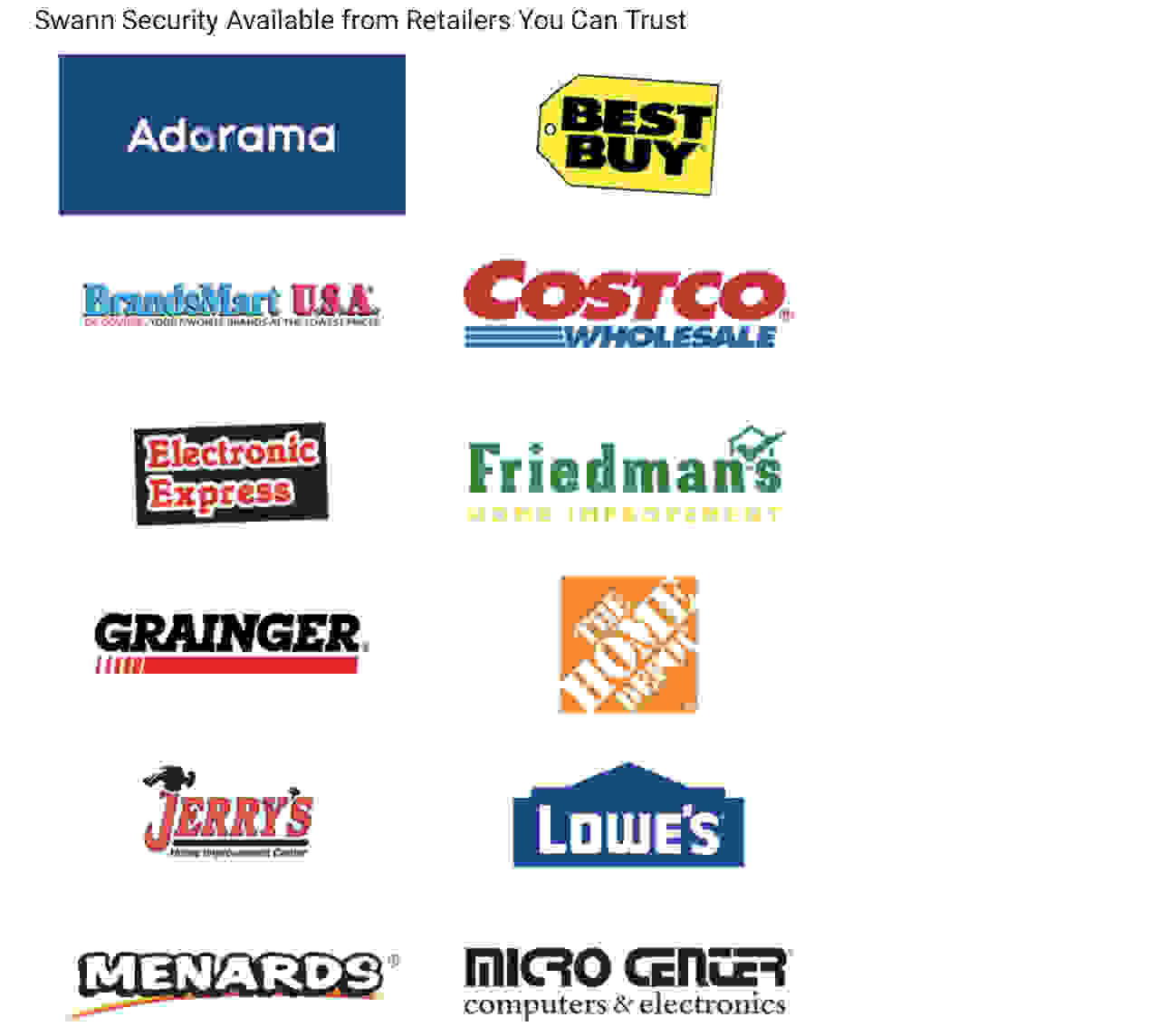 Sams Club being left out was conspicuous. Not an accident. Even with the Federal Governemnt stepping up, and even when Congress agrees almost unanimously, once you start messing with the Waltons, or Bezos, its Game On.