China's growing influence, if not dominance, of the global video surveillance market is unquestionable.

Here is a quick video clip from the show floor:

Since there is a lot to cover, we have produced a podcast recording to provide more color / commentary.

Download 37 Minute IPVM CPSE Podcast here or listen to it immediately below:

Here's an outline of what is discussed:

The exhibit floor is divided into 9 halls, with the most well-known brands being in Hall 1, as the image below of the front of the show floor features Pelco, Bosch and Honeywell, with Hikvision further to the right, and Axis and Dahua banners visible hanging from the ceiling.

The Hall 1 map below shows the 'main' floor. Though there are a handful of Western and Japanese exhibitors, even here local companies dominate. Also, interesting that booth sizes are all fairly close, with the two biggest (Hikvision and Dahua) only being slightly larger than other large manufacturers: 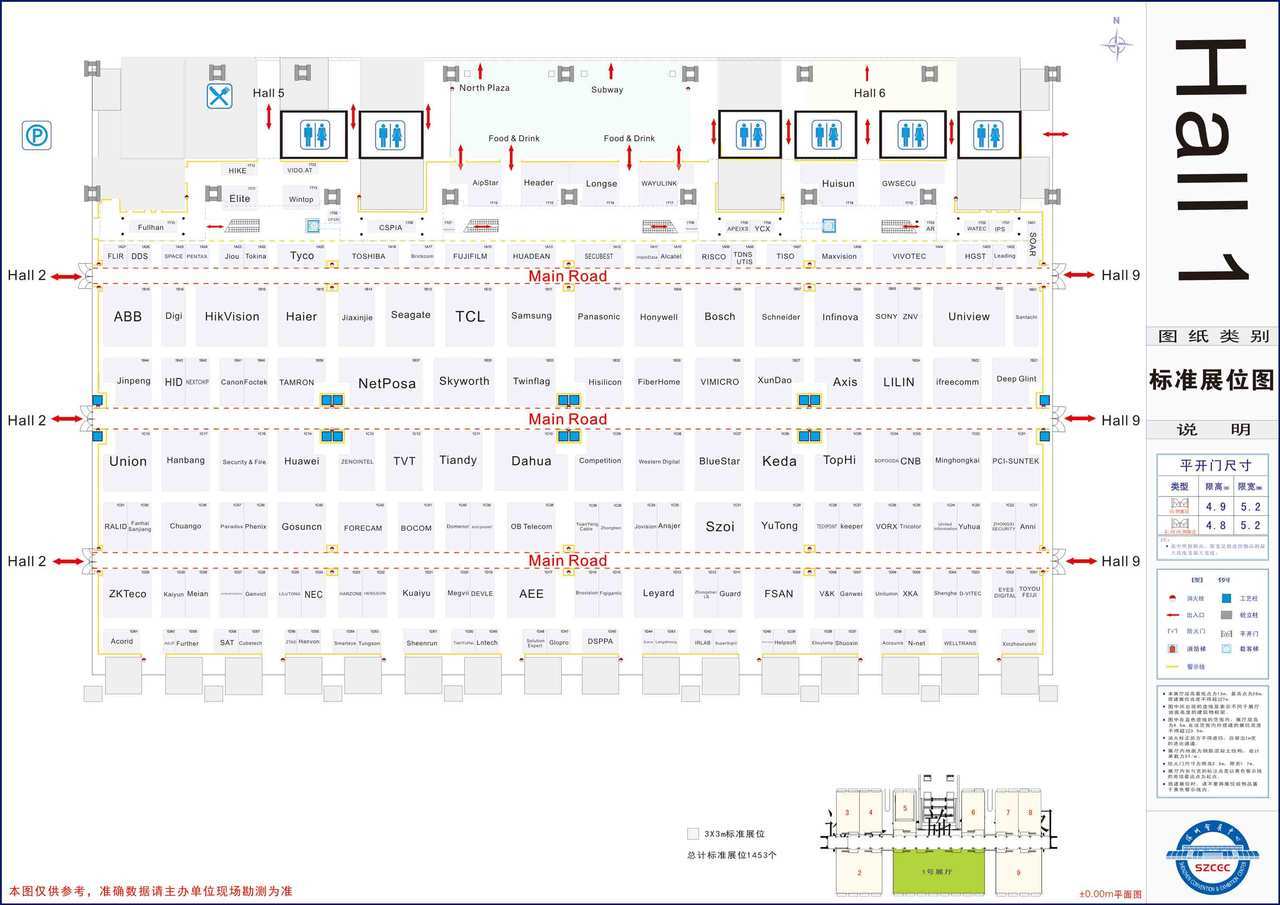 The downside of this layout was that Hikvision and Dahua were swamped all the time, making it difficult to get in, see what was being presented and talk to reps (note though we are meeting with both companies this week at their respective HQs).

This video gives a feel for the traffic at Hikvision's booth:

The image below shows a similarly packed Dahua booth: 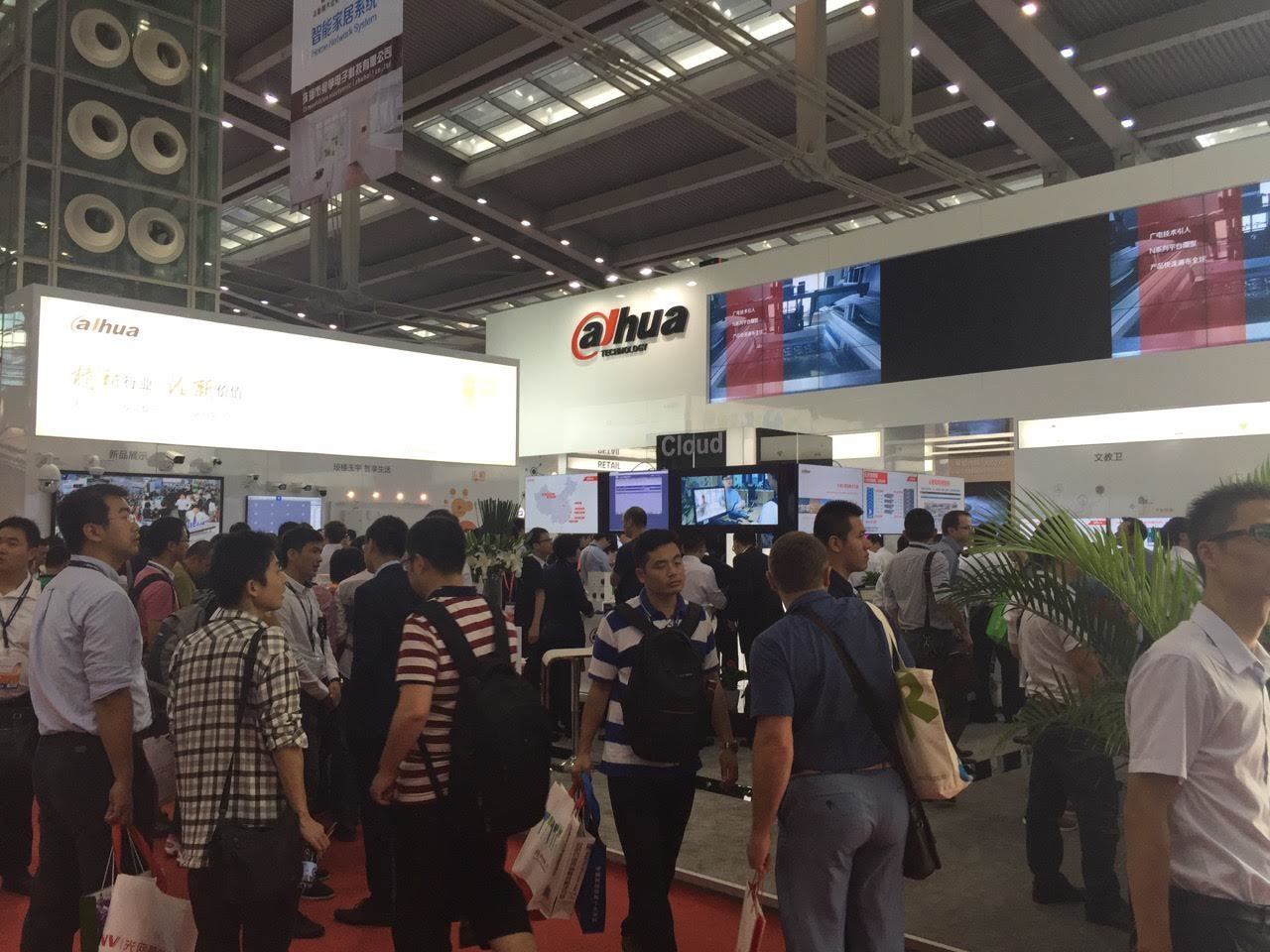 Western booths did not have anywhere near the traffic as Chinese ones. Below is Axis booth, low compared to Chinese booths standards, but much better than most any other Western one: 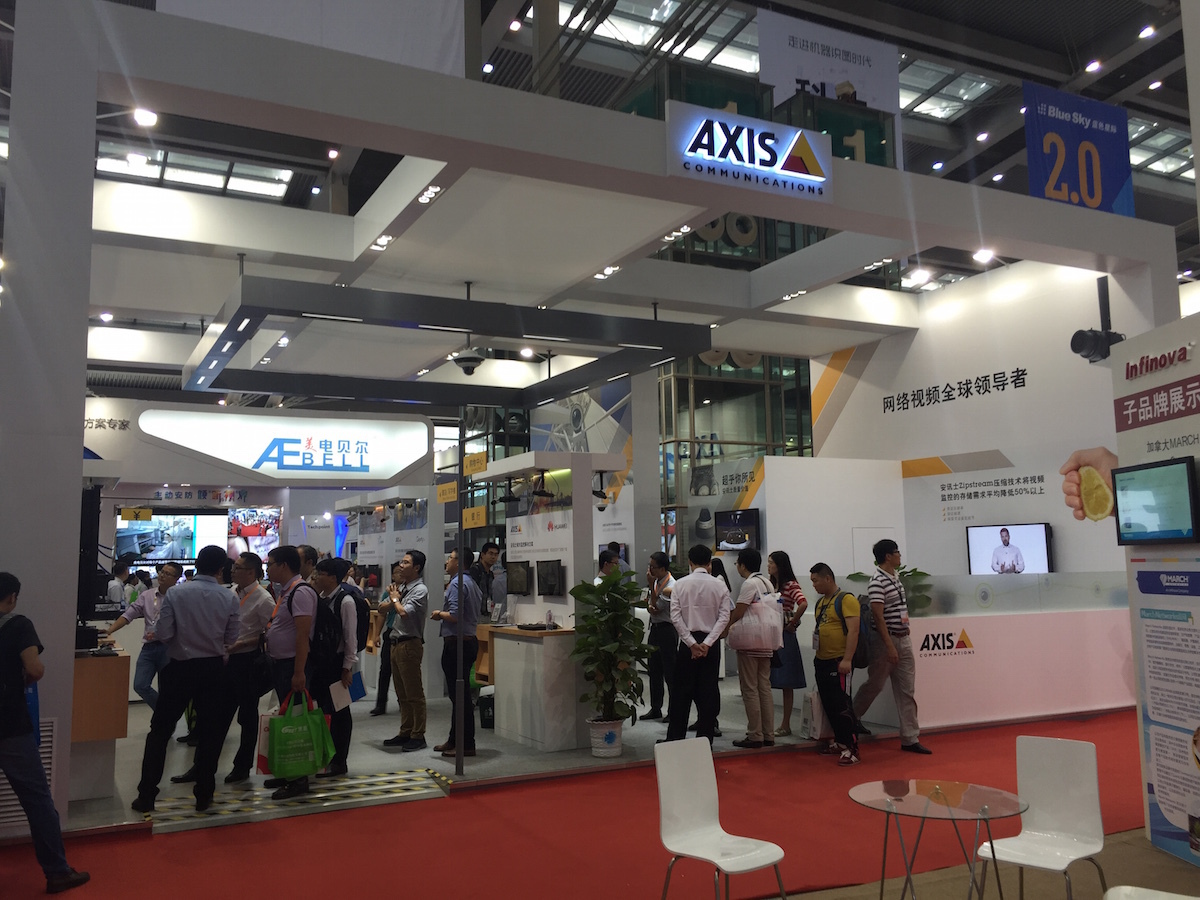 Though companies like Tyco and UTC are big names in the West, at CPSE, they generated little booth traffic.

On the other hand, one way for non-Chinese companies to get traffic was to do games, as Toshiba did here:

However, give that so many of the attendees are not really buyers, the point of this is suspect.

Below is a video of Panasonic's booth:

In China, the companies that spam you every day actually had quite sizeable presences. Our long term nemesis Longse was there in full force. Not only do they spam you online, they swarm you in person as their hallway team show below: 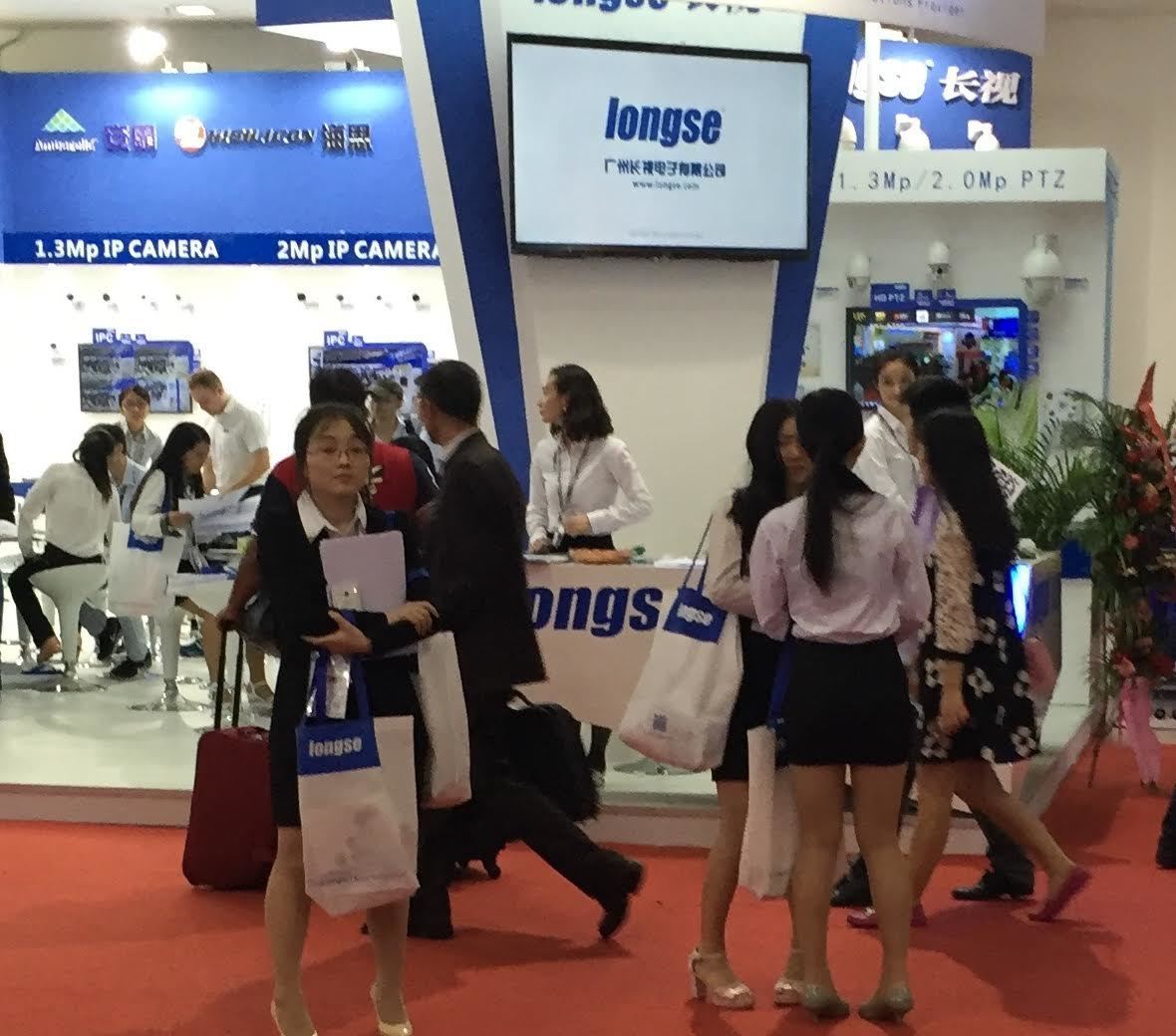 Many smaller booths offered low price products and kits. Below is one example: 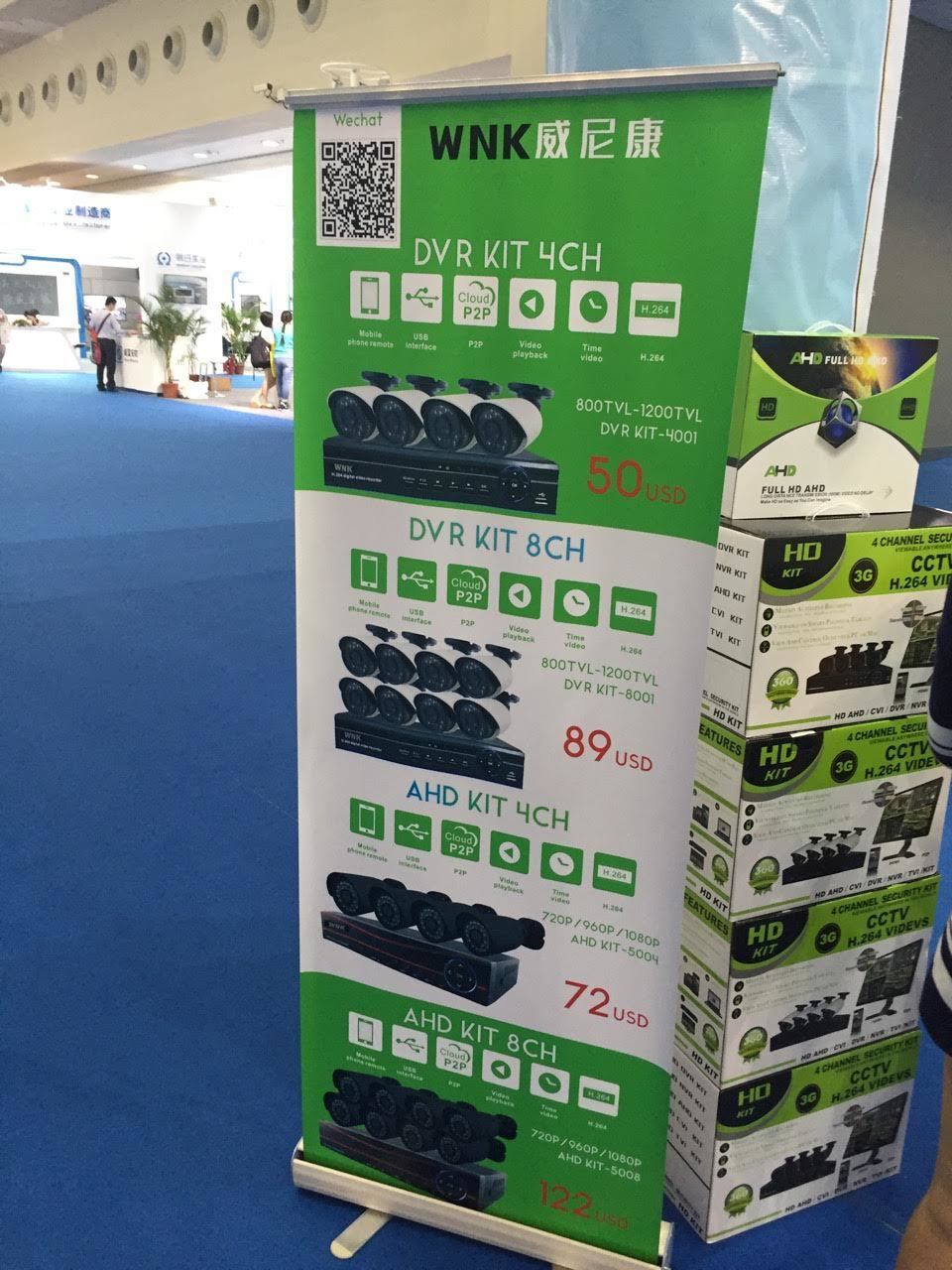 Yes, at the bottom is an offer for 8CH HD analog kit for $122 USD. Offerings like this commonly get rebranded / resold by Western companies.

The biggest potential technology jump at the show was 4K HD analog, with both Dahua and Nextchip (AHD) demonstrating it. 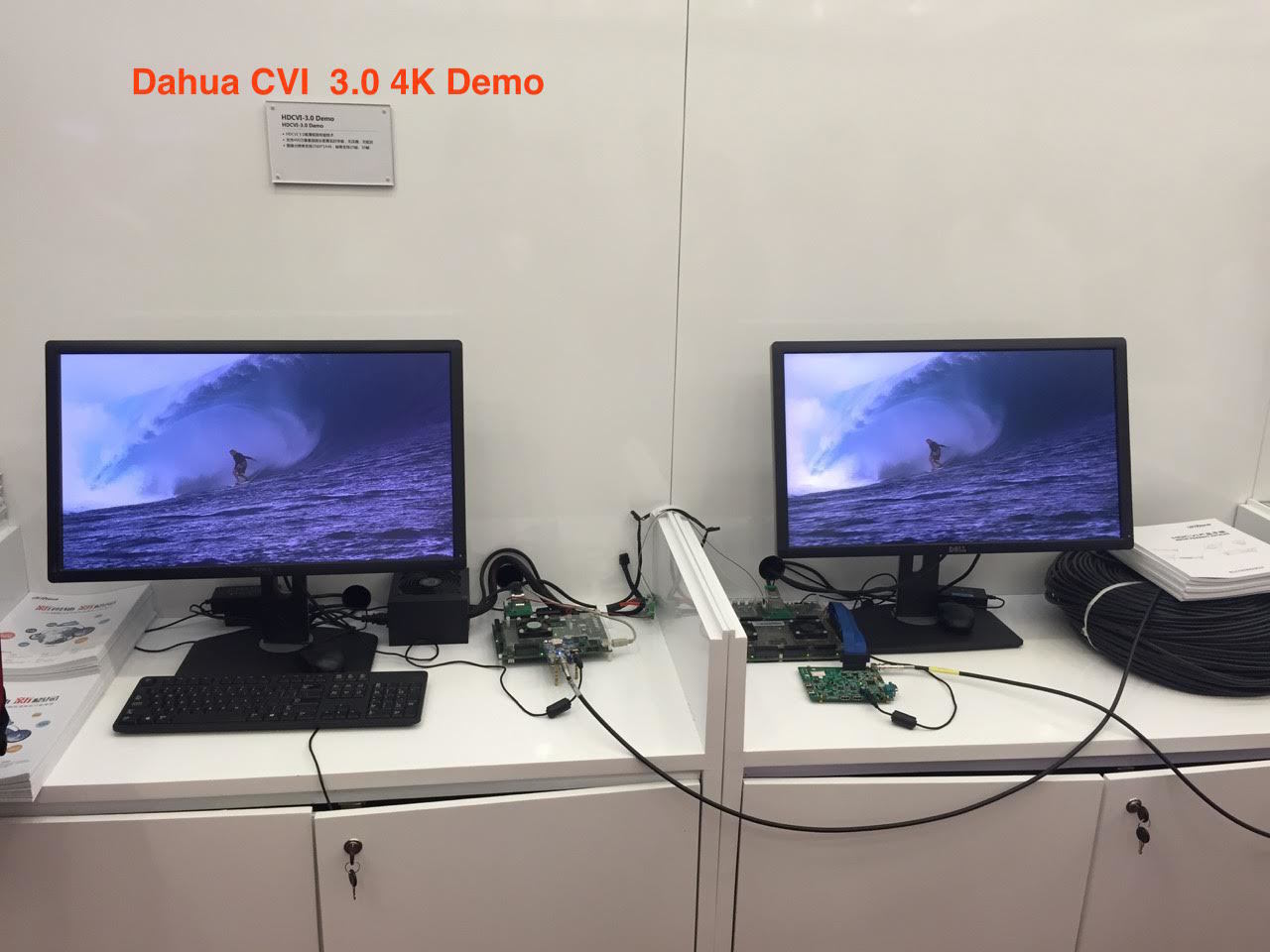 Nextchip advertised their own version, as shown below: 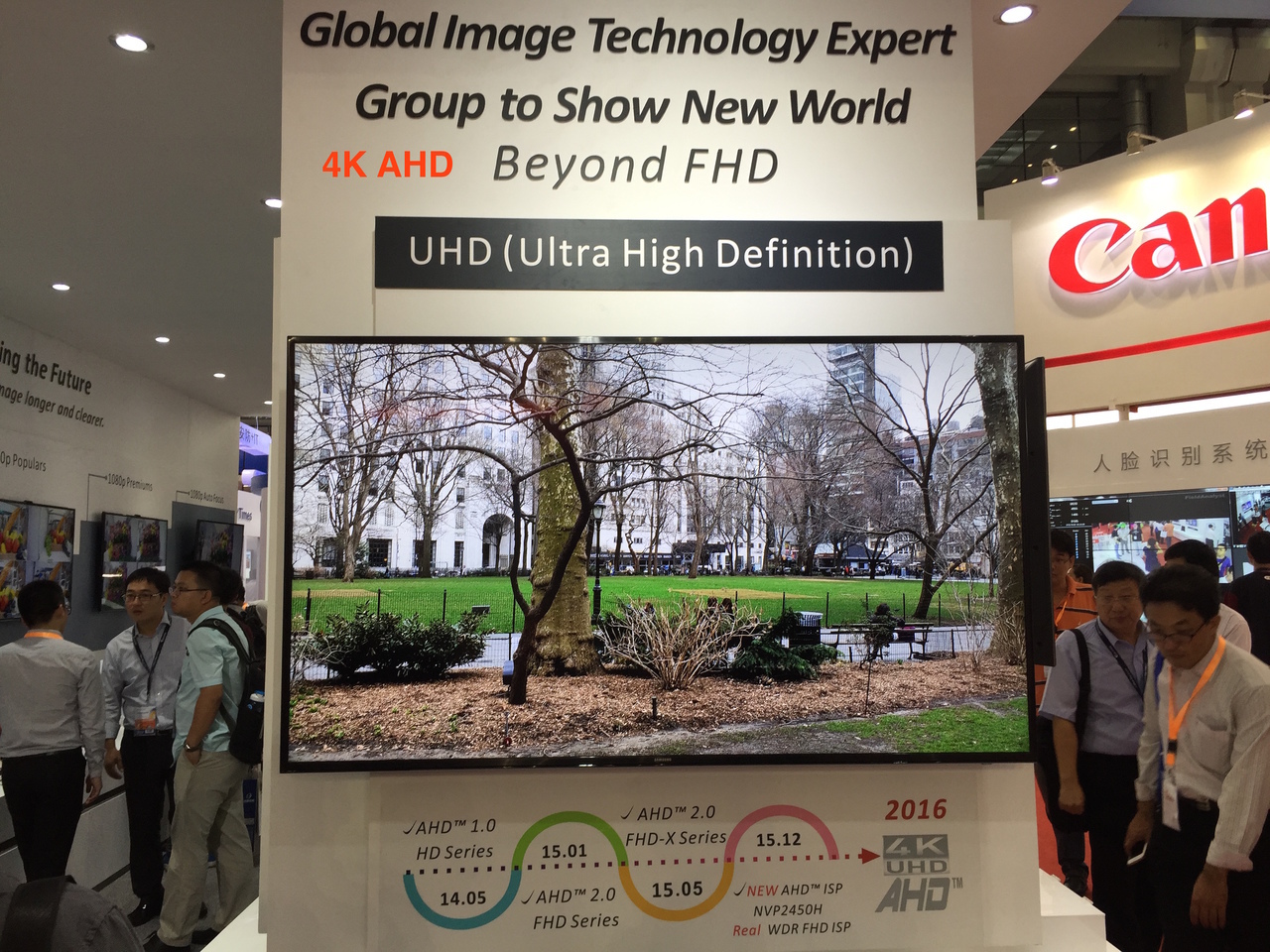 Both say release is planned for 2016. Questions remain. Both claim 4K / 30fps at the same distances at their 1080p offering. How are they are doing this and what tradeoffs exist is unclear.

The image below shows their 5MP demo: 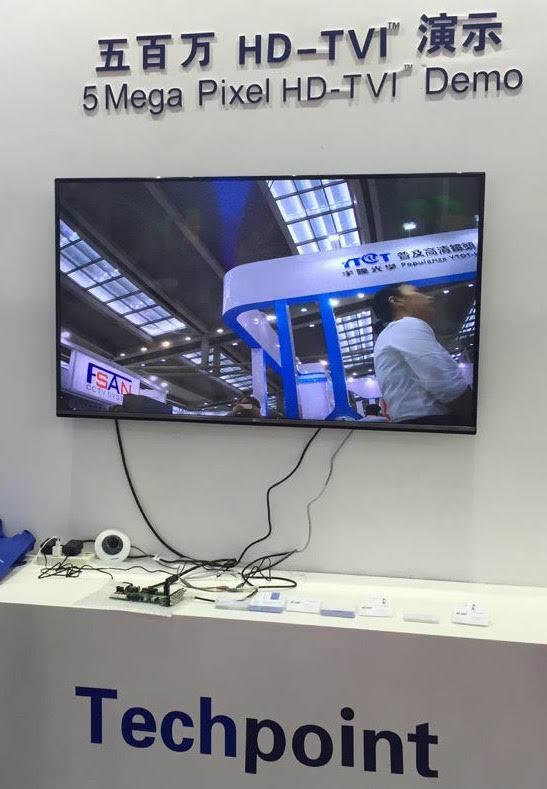 Sony announced a new sensor series, named Starvis, at the show (see brochure / specs) that aims to provide break through low light performance. 4K (1/2.5") and 1080p (1/2.8") models are being offered.

Here is an image from their booth: 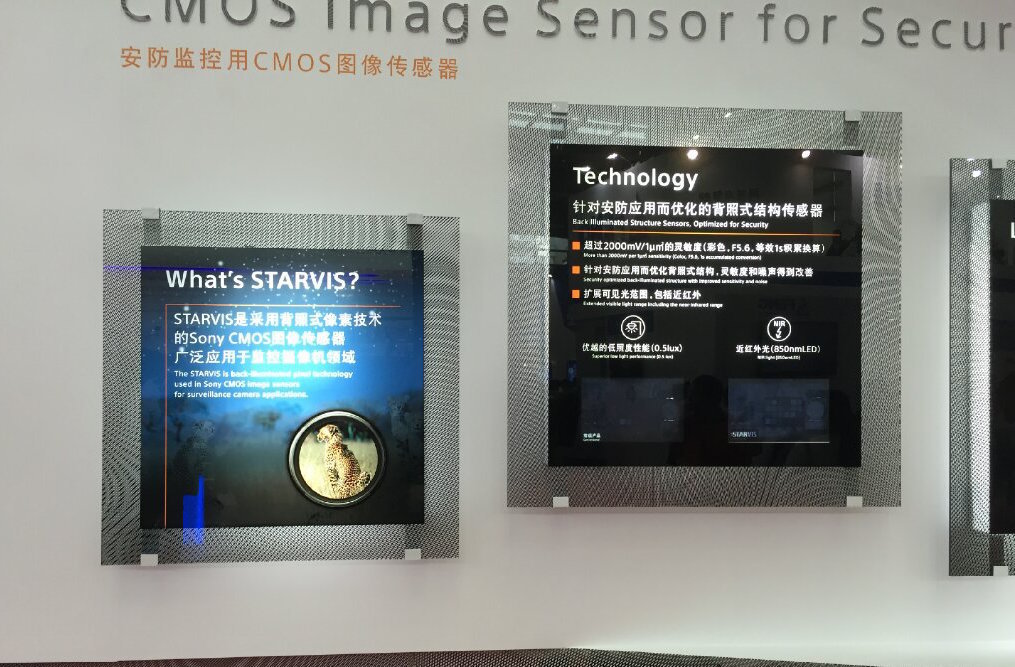 Determining how well imagers will do from demos and marketing materials is impossible. However, Sony's new imager will have to perform very well, given how fast / improved many rivals sensors / cameras have gotten in the last few years.

You can watch their marketing video but it is quite vague:

There were a few new multi-imager models on display at CPSE. 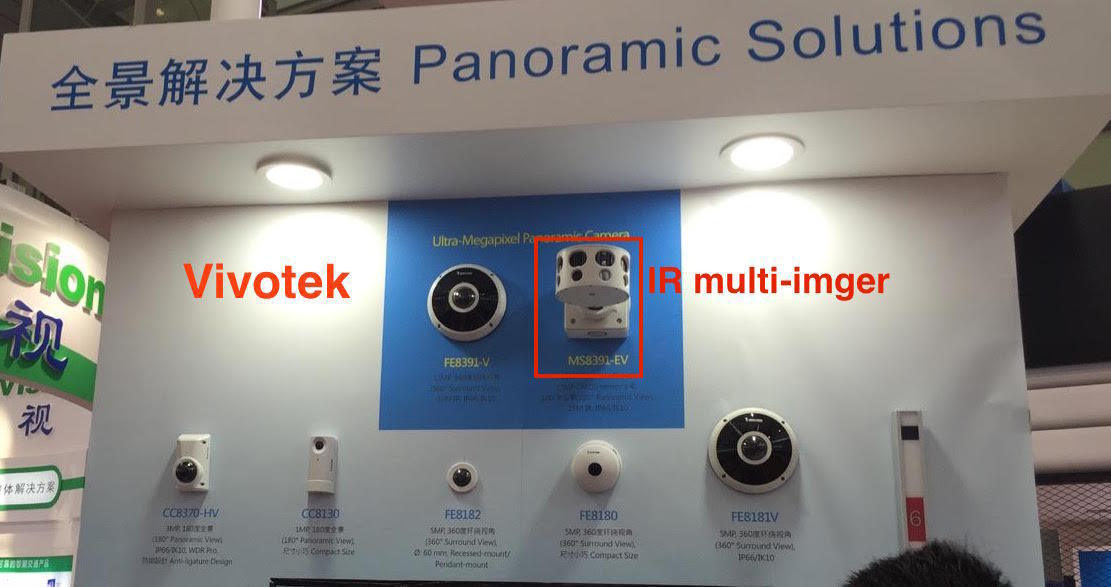 Hikvision's multi-imager displays was quite fascinating. In addition to the multi-imager announced at ASIS, they had two other models. One contained a ring of 8 fixed cameras along with a PTZ (top right side), similar to the Axis Q6000, while the other consisted of a ring of 7 fixed cameras plus a fisheye (top left side). 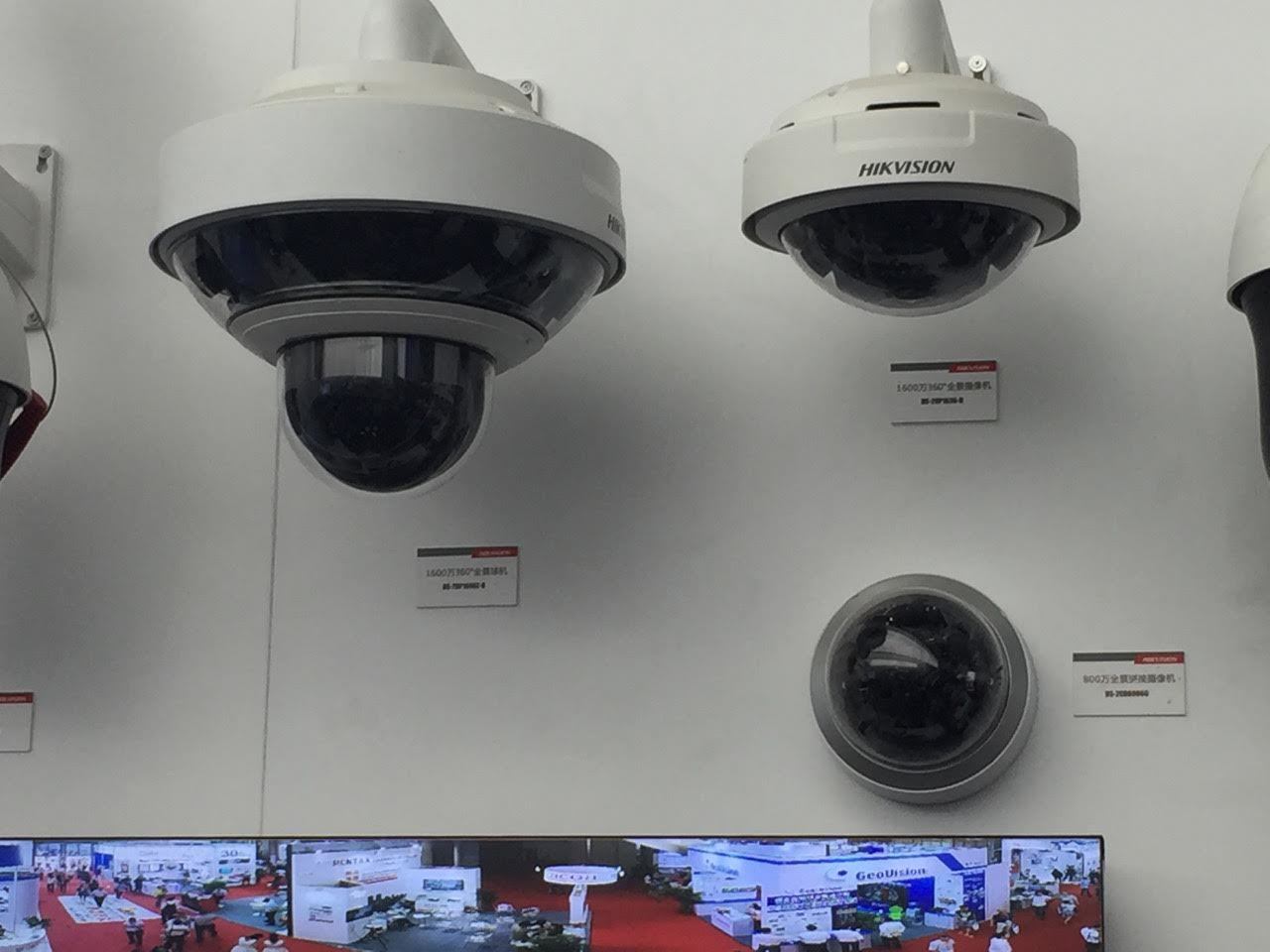 It is not clear if or when it will be released outside of China but 7 fixed cameras and a fisheye in one housing has significant disruptive potential. We will check with Hikvision during our visit this week. With the crowds and lack of English speaking employees, it was quite hard to get feedback from Hikvision at the show.

We saw one other interesting multi-imager - 20MP / H.265, but bizarrely no manufacturer name was listed on the banner and the exhibitor next to it was not showing it. 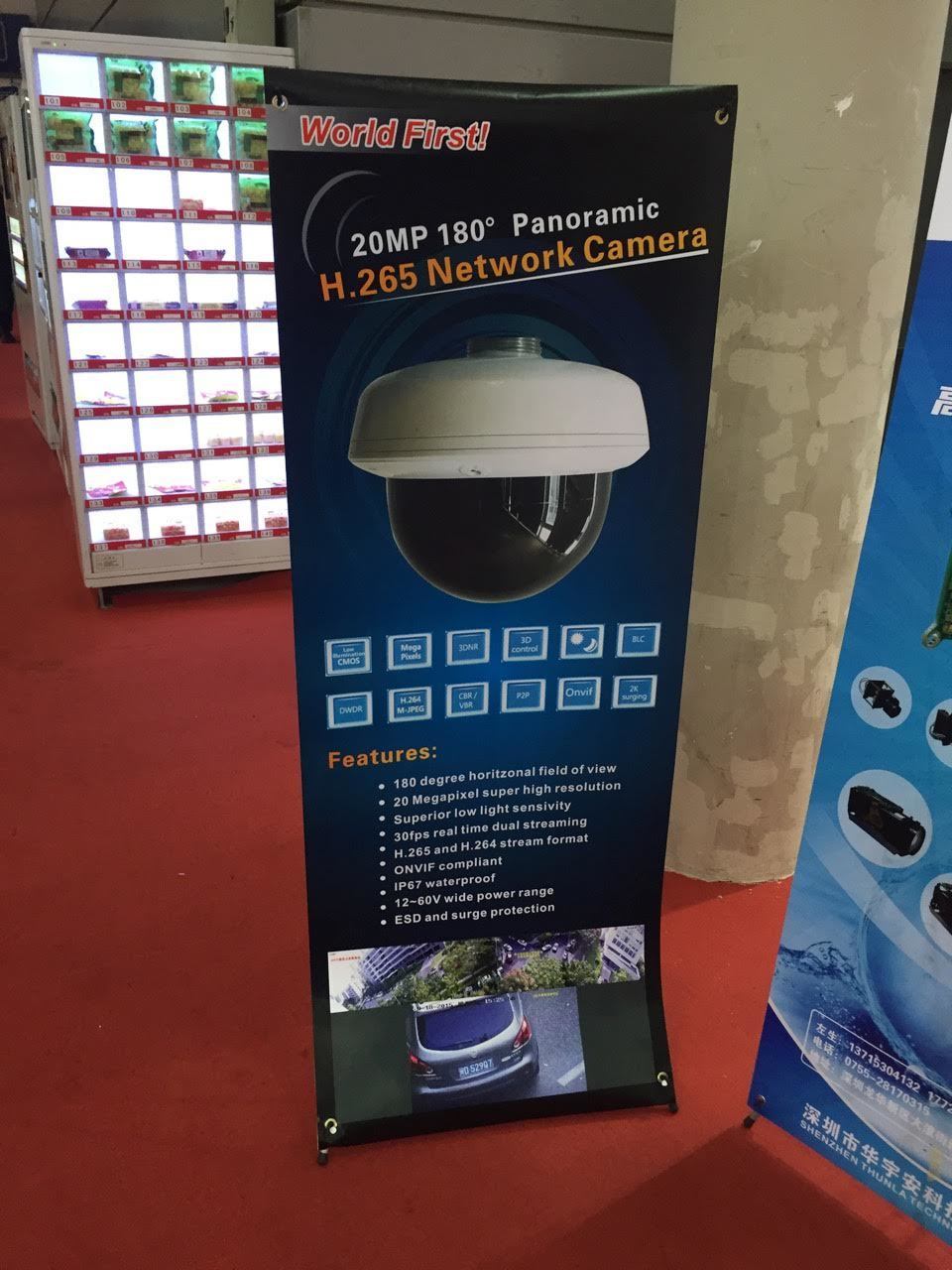 Drones were popular, both large and small, with even Hikvision getting in on the market (no details yet): 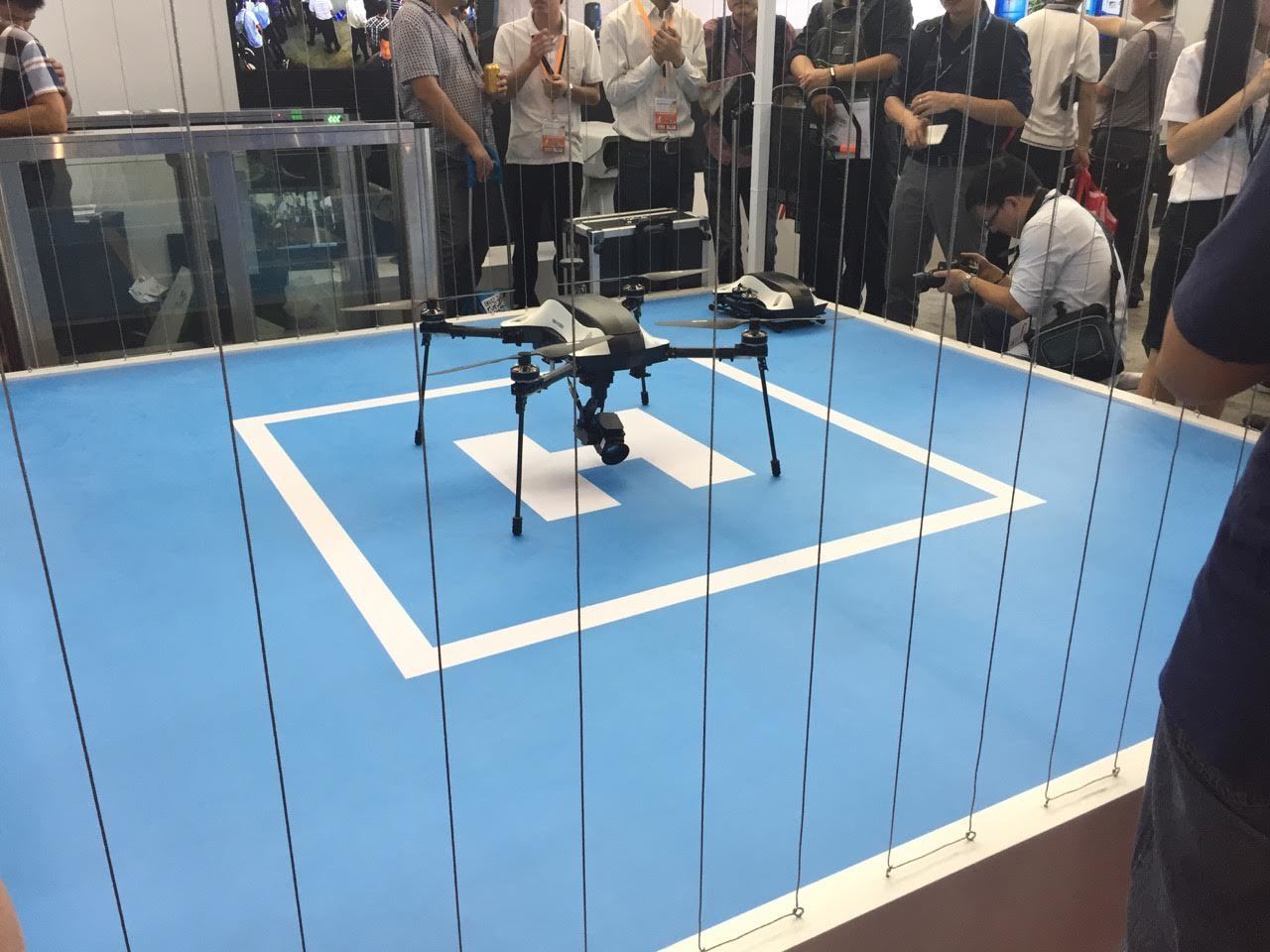 There were a number of weird / surprising elements of the show, from a Western perspective.

One of them was the ongoing parade of signs, seen below. These parades passed regularly, trying to lure visitors to their booths for one deal or another.

Another was selling show badges; Admission is free, but for Chinese attendees, the wait in line could be an hour or more. Some people waited in line, then got badges (which has no personal name on it) and then sold them to others who wanted to get in immediately, for example shown below: 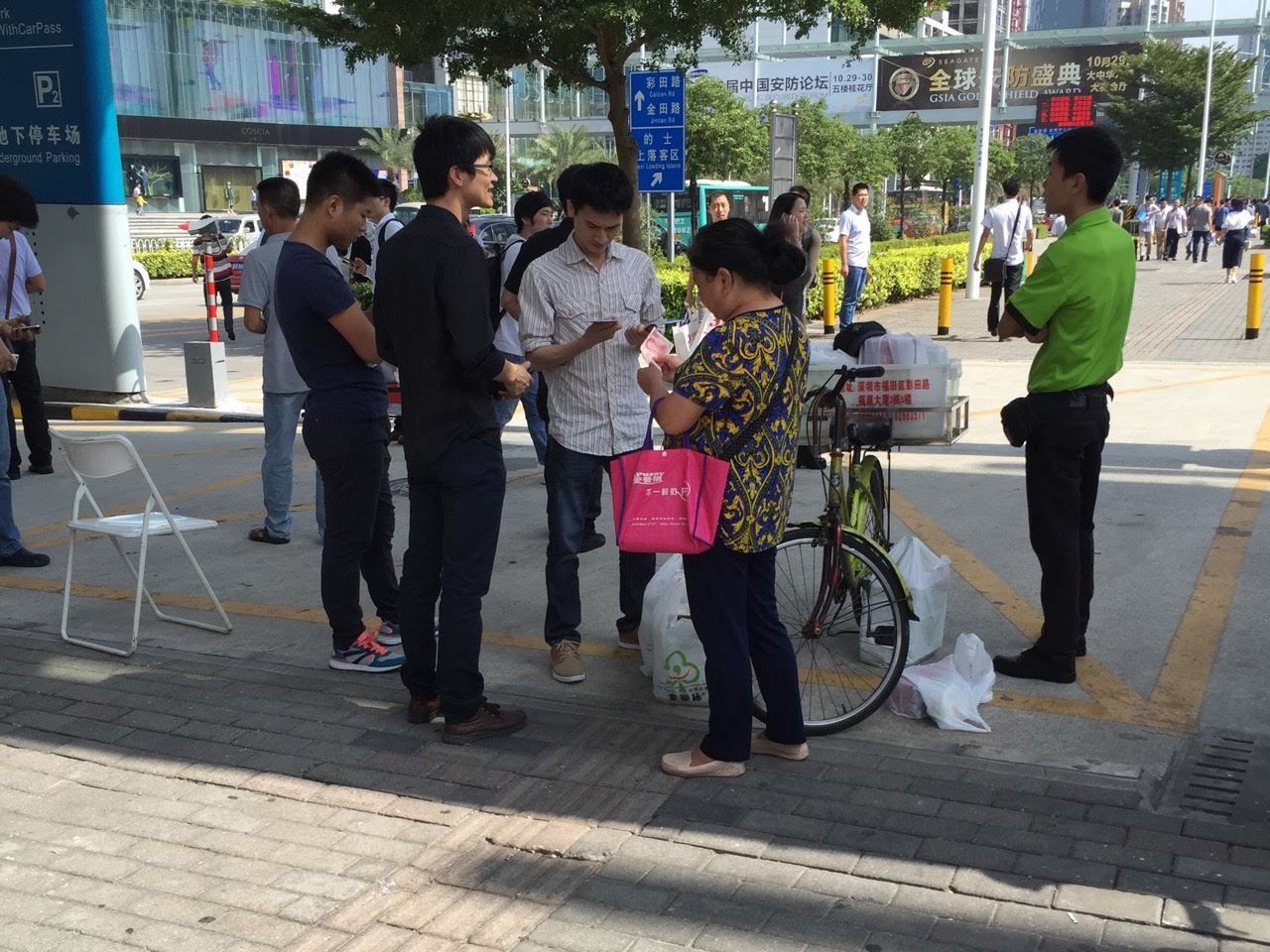 And perhaps the weirdest of all, was the common scene of people grabbing brochures from booth after booth. They would then go outside and sell a collection of brochures. Indeed, as the image below shows, some of these collectors would even pull brochures from trash bins to sell. 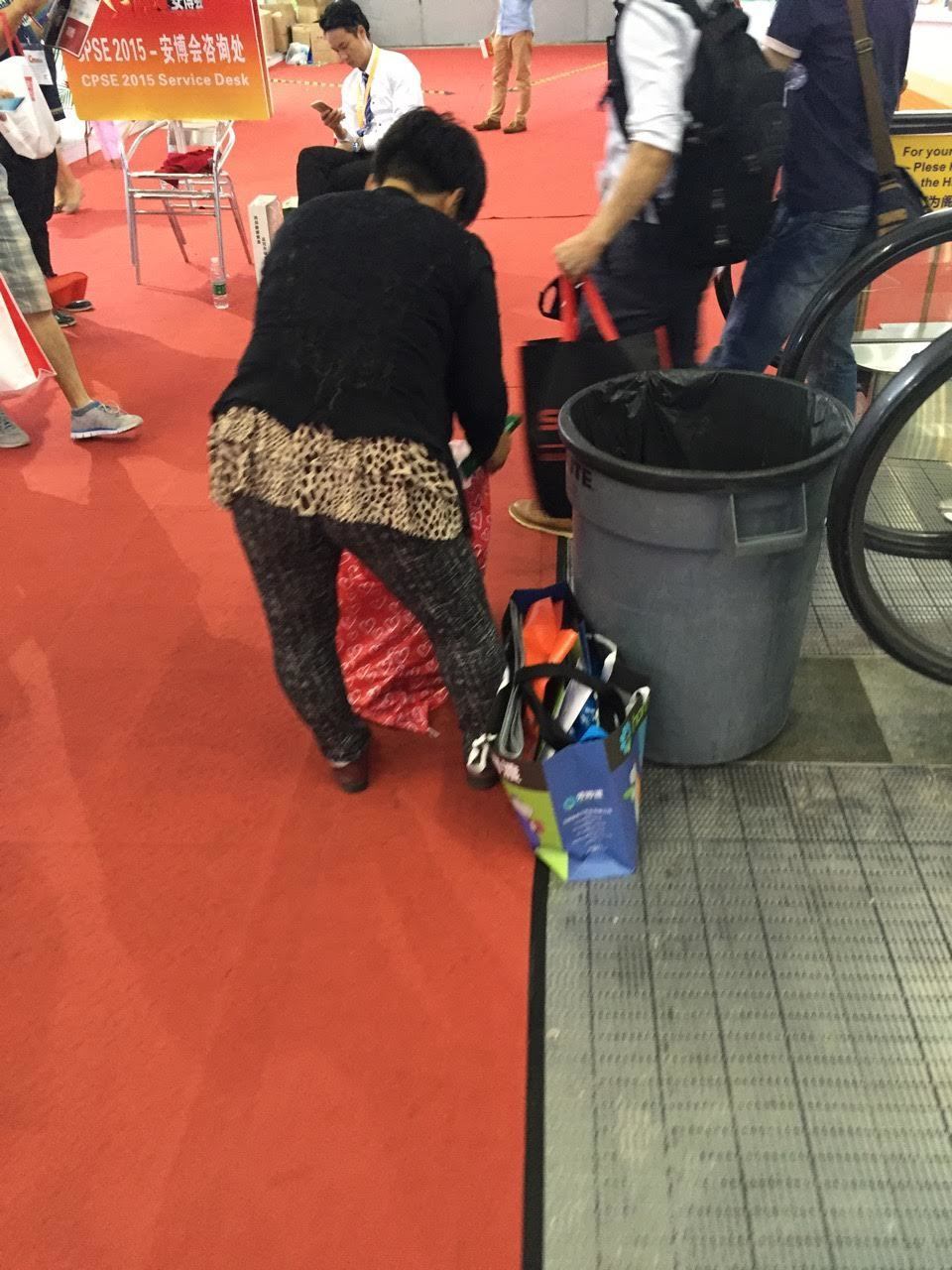 IPVM's China trip and reporting has more to come. Ethan has also visited the world's largest CCTV flea market and factories. He is going to meet Hikvision and Dahua at their HQ this week. Look for more coverage on all of that.