Hong Kong protests have brought global attention to video surveillance and the ongoing attempts of protesters to disable or undermine those cameras using lasers. But what impact do these lasers have?

IPVM bought and tested lasers on surveillance cameras to determine what impact they have:

Warning: This report has fast flashing lights that may cause discomfort or trigger seizures for those with photosensitive epilepsy.

This video overviews how we tested and what we found:

Our testing showed it is difficult to permanently damage surveillance cameras because:

Striking or shooting a camera is far more likely to damage a camera than using a laser.

However, while substantially damaging a camera is hard, temporarily "blinding" it/obscuring subject was easy. Any laser aimed into the camera's lens or even hitting its dome causes drastic shifts in exposure, at least, and completely washed out or colored video at most. Temporarily blinding cameras was easily done from 50' and further, by hand, but easiest with the higher powered lasers due to their larger beam pattern.

Any Laser May Damage At Very Short Range

Finally, at close range (5-10'), even small <5 mW laser pointers using AAA batteries (e.g., the ones used to play with pets) were able to damage sensors, albeit only a few pixels at a time. High powered 30,000 mW lasers more quickly damaged sensors and in larger "chunks" of pixels, but were also able to effectively "cook" the camera, creating smoke within a few seconds of steady aiming.

We look at these two categories in this video:

The image below shows all the lasers bought and tested, ranging from small, pen-sized "pet" laser pointers, to a moderately larger firearm laser sight, to the largest models (30,000 mW) which were the size of a small flash light. We also tested a DC powered blue diode (far left) which required plug in power. 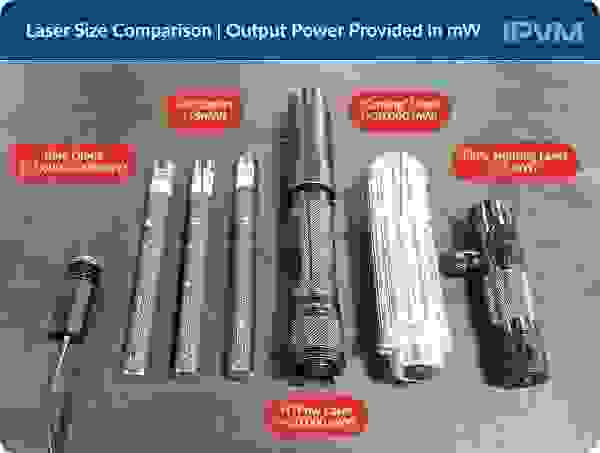 Pricing ranges from ~$13 USD online for a three-pack of low powered laser pointers to almost $200 for the highest-powered 30,000 mW option.

Note that lasers are regulated in the US by the FDA. Those sold as "pointers" must be 5 mW or less, but there is no hard limitation on output power as long as product labels follow hazard guidelines.

Pricing for each laser purchased:

At long range, aiming the laser accurately was very difficult, and not sufficient to do any consistent damage. We had to attach it to a rolling tripod to do significant damage.

Even when stabilized, the most damage the high powered 30,000 mW could do from ~45' was creating small amounts of dead pixels. For example, with the laser clamped to a tripod dolly, we created a line of dead pixels on the camera's imager:

What the image looked like after completing the walk across the FoV: 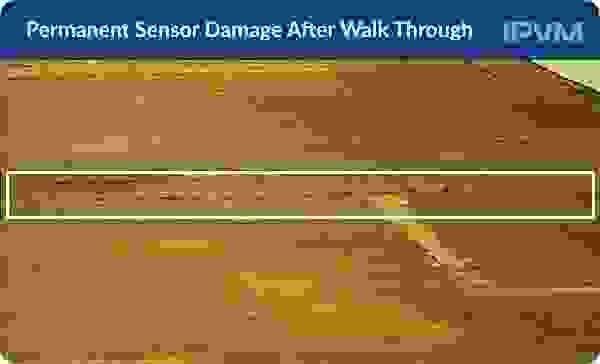 This type of damage is certainly annoying to the camera's owner, but subjects were still easily recognizable even with these dead pixels.

Damage From Close Range Possible With All Lasers

From close range, <10', damaging the sensor was possible with all lasers tested, with effects more severe.

For example, using one of the high powered lasers at ~5' creates entire rows and columns of dead pixels, shown here:

It is possible that, with persistence, enough of the sensor might be damaged to effectively break the camera, but even with this damage, subjects may still be recognized.

Similar effects were possible with the blue laser diode, which resulted in more burnt out vertical lines:

Finally, after attacking the camera with every laser at this range, there is significant damage done, but not enough to make the camera truly useless.

Note that the small pink/purple regions of dead pixels are due to the lower powered pet laser pointers and burnt out lines are due to high power models. 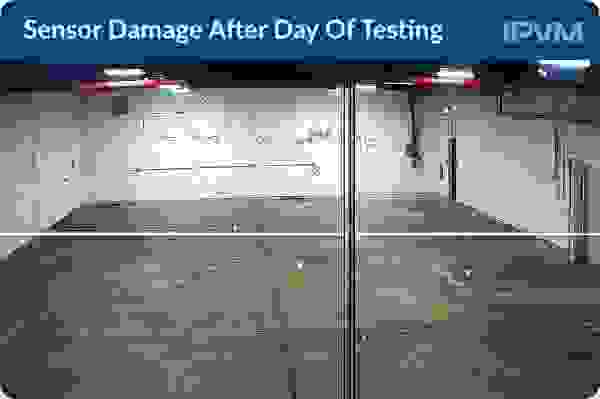 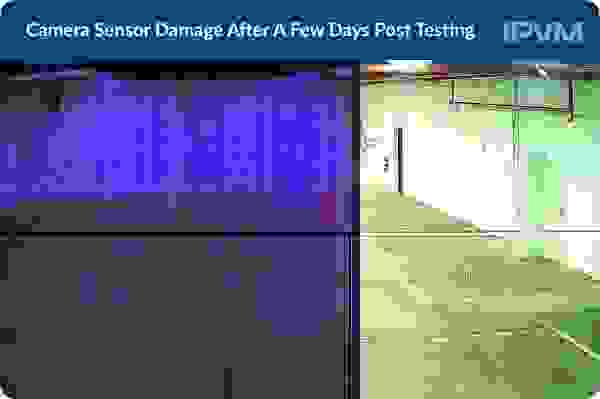 We are unsure why this occurred, possibly the damaged pixels worsened over time or with more exposure to light.

At long range, while disabling cameras is very difficult, if not impossible, we found it easy to temporarily blind them, obscuring subjects. Aiming the laser directly at the camera completely washes out the image. The rolling shutter type of effect seen below was common:

While the pet lasers were the weakest we had, we were able to temporarily blind the camera while shining the laser from distances of ~60' and longer while holding the lasers in our hands

While it is theoretically possible to move through the scene unnoticed if the laser is pointed away from the camera for more than a few seconds, the camera is likely to capture the subject.

At night time and low light, it was just as easy to blind a camera. Because most cameras now use integrated IR, visible to the human eye, this red glow effectively works as a beacon at night. Additionally, while cameras adjusted exposure fairly quickly back to "normal" during the day when the laser was removed, at night it took several seconds longer for exposure to correct, darkening the scene (~0.02 lux shown). 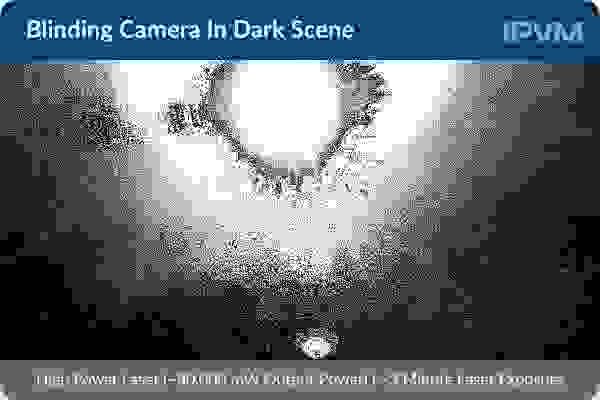 If a high powered laser is aimed at a camera for several minutes, it is likely to physically damage the camera's lens or housing, most often disabling the camera in our tests.

For example, after aiming the 30,000 mW laser at this dome for about four minutes, the lens heated and cracked, making the entire field of view blurry. Additionally, only a few seconds' exposure melted the plastic surrounding the lens, which smoked. 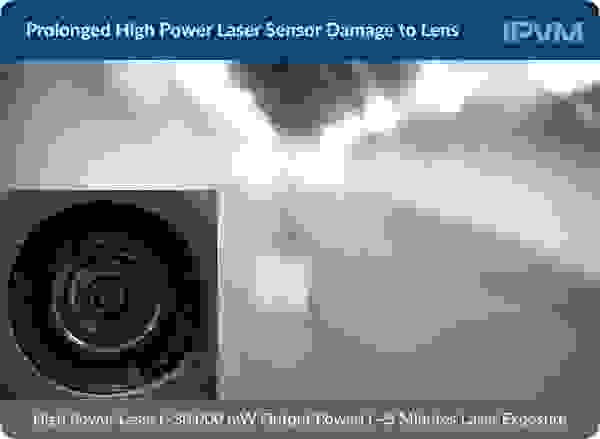 In another camera, the heat of the laser broke the image sensor, making the image useless. It did not seem to suffer from the same dead pixel issues of other cameras we tested, but then totally failed.

Here is the final state of the sensor after the prolonged test: 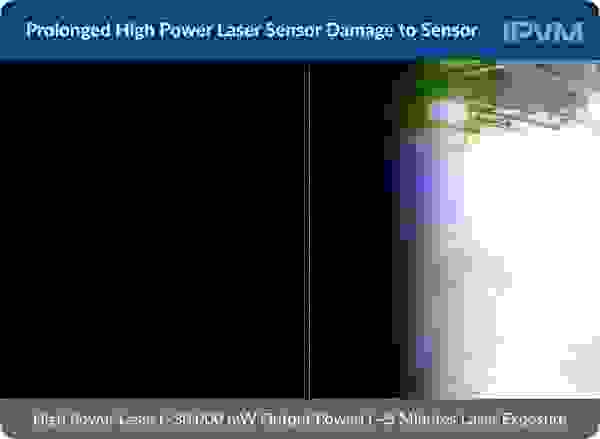 Poll - Would you replace this camera?

Take a look at this image from a laser damaged camera: