This is no longer funny.

While Knightscope has laughed it up promoting robot selfies, joking about a 'suicidal robot', the man who attacked a robot and more, their financial results show serious problems for the company and its legion of small investors.

New US government financial filings show that Knightscope has added just 2 total customers for all of 2018.

It is astoundingly low for a company that spent $5 million on sales and marketing for the same time period. Moreover, Knightscope is currently fundraising at a $300 million pre-money valuation.

Inside this note, we examine the financials, Knightscope's problems and outlook for the future.

They did disclose that their average contract is only a year so churn is certainly a risk:

The net result, regardless of churn, is quite disconcerting. 23 total customers after spending $30+ million and years of mass media attention is a problem. There are a vast number of security end users (e.g., Knightscope in this report claims 8,000 security guard firms) so to capture so few after 2 years and so much money raises questions about basic product / market fit. Plus, the average customer has just over 2 robots each so they are not making it up with mega accounts.

Given the slow customer growth, revenue did not even double year over year with operational losses continuing to grow to over $14 million: 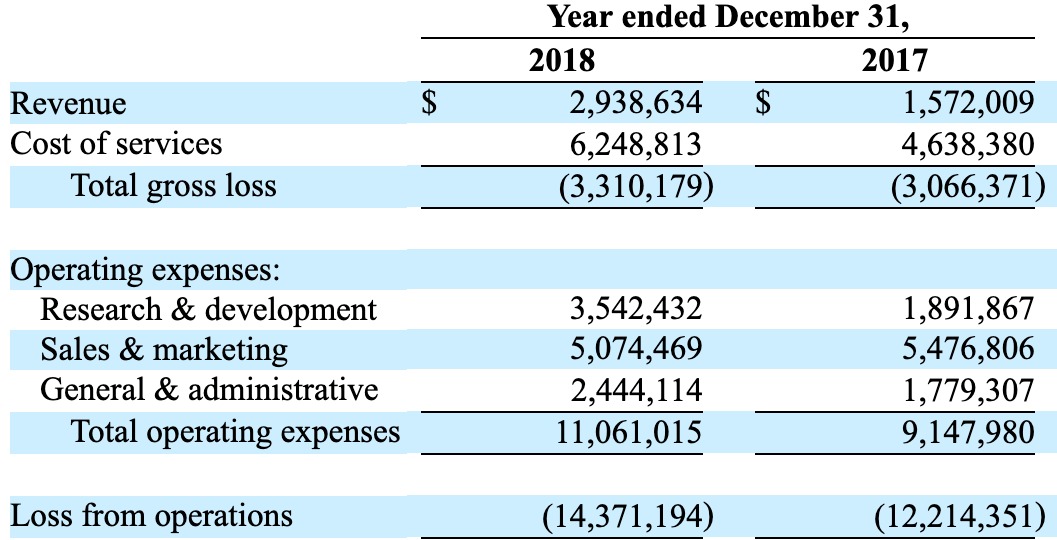 Early stage startups spending this heavily on sales and marketing should easily be growing far faster.

Despite less than $3 million in sales and so few customers, Knightscope is in the middle of raising $50 million at a $300 million valuation as the term sheet section of their offer (login required) shows:

Raising money at 100 times revenue is atypical, to say the least. Super fast growing, 'hot' tech companies can do in the order of 10 times revenue but 100 is simply amazing.

This is a private placement (see Knightscope's memorandum) not professional equity fundraising. The SEC has quite frank warnings about such offers:

Keep in mind that private placements can be very risky and any investment may be difficult, if not virtually impossible to sell.  [emphasis theis]

How much Knightscope has raised in this round, at this valuation is unclear. Last year, Knightscope only raised ~$4 million unlike the previous year when it was over $20 million (at an $80 million valuation then):

The $20 million round was being sold on CNBC for "$3 per share" so quite a number of smaller investors / individuals participated.

As of the end of Q1 2019, the company has just $1.6 million in cash left, and estimates burning a million per month, as it described:

To even get there, it entered into a financing arrangement at 30%+ effective interest:

On February 28, 2019 the Company entered into a financing arrangement with Farnam Street Financial (“Farnam”) for $3,000,000 (“Financing Arrangement”). Under this Financing Arrangement, the Company collateralized fifty (50) ADMs and have an initial repayment period of two years for a monthly fee of $121,129 per month plus tax and an option to purchase these ADMs back for $1,350,000 plus tax or, at the end of the two year period (March 2021) the Company can elect to extend the repayment period for additional year at a monthly fee of $66,621 per month plus tax with an final payment of $600,000 plus tax at the end of the additional year. The effective interest rate under the two and or three-year repayment periods is 35% and 31%, respectively. [emphasis added]

On the plus side, Knightscope has proved that lots of small investors are interested in the hope of robots. And they may very well be able to get enough investment to continue this for some time.

The problem is that they need to generate far more customers at a far higher growth rate. It is not clear to us how they will get there with the current strategy and burn rate. Whether they adjust it remains to be seen.

Knightscope Goes Public, Plunges, Then Rockets, Then Falls on Jan 31, 2022
On its first day of NASDAQ trading, Knightscope's stock plunged 40%, but on...
How Cobalt Robotics May Disrupt Security on Sep 13, 2019
While security robots have largely become a joke over the last few years, one...
2019 Mid-Year Video Surveillance Guide on Jul 01, 2019
IPVM's new 400+ page Mid-Year Industry Guide brings all of these issues and...
Comments (66) : Subscribers only. Login. or Join.