Competing Against Tyco IS / JCI

Mega-integrator Tyco Integrated Security has gotten even bigger with the 2016 merger with Johnson Controls.

110+ integrators told us what they thought how Tyco IS / JCI and how often they compete with them: 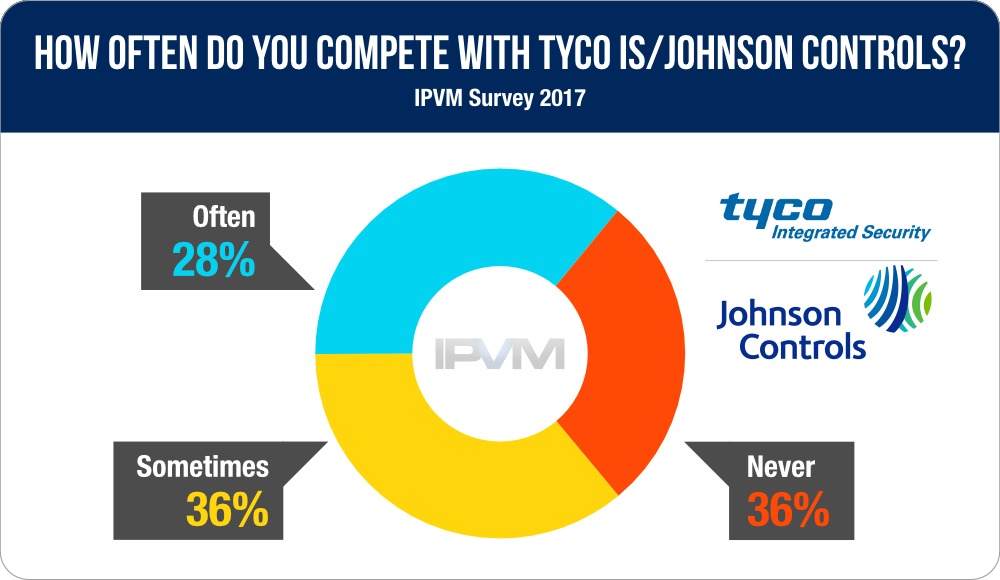 The clear majority of integrators compete with Tyco IS / JCI at least some of the times. However, compared to other large integrators surveyed, integrator respondents were particularly negative about Tyco, criticizing them for:

The Floyd County police investigative summary stated Johnson Controls received and paid for fake invoices from Steve Bevill, who has not been criminally charged at this point.

Bevill worked as a subcontractor for Johnson Controls to do work for the Floyd County Board of Education, a police summary states. Derry Richardson allegedly negotiated those contracts, insisted and demanded that Johnson hire Bevill to perform part of all of the work on a given project.

3 have been arrested for this case, including Rodney Holder who was a Johnson Controls account executive during the time the alleged bribes to the school board occurred.

Wow, that is sad. There's just no reason for it. The amounts listed just don't seem worth it, though not trying to say any amount really is.

Do I have to upgrade to Group Plan to download this report?? It should be available without upgrading.

The fact we can't download the report is ironic given the focus on Tyco's practices!

Focus on corrupt employees is pretty irrelevant as it's common in most companies of this size. Indeed, within the UK, it's the Tyco corporate culture that restricts the sales teams from many opportunities.

It's fair to say there are some excellent sales people, engineers, designers and the like within Tyco - but there are also a very significant number of "weak links". The size of Tyco, Chubb etc allows the "weak links" to hide very very easily - and this also serves to demoralize the far more proficient staff. The companies arrogant approach to customers will always feed back to smaller installers and the fragmented basis of it's workforce in the UK, based upon legacy acquisitions that only serves to fuel resentment, empire building and an overall picture of a disconnected, dysfunctional organisation.

I have also worked for them (not out of choice - but following acquisition) - and they are truly awful employers at every level. As a salesman they are also embarrassing to work for - not least as their appalling customer interaction sets the scene for any sales visit. It would be fair to say my comments are based upon my own anecdotal experience rather than hearsay or rumour.

The fact is that Tyco is NOT the sum of some of the great companies it has acquired. Instead of taking an iota of strength from the companies, it simply moulded them all into the shape of it's illustrious Dennis Kozlowski's vision.....and that says it all!

It's the easiest thing in the world to compete against them. Their use of templated quotes using "in-house" manufacturers, sold by inexperienced sales teams makes them easy pickings, sometimes. By the same token, how you can bid against a national company which will absorb the loss when a rooky salesman has massively under-quoted a job, is a common issue.

In summary, I would say they they do not provide a great deal of threat. I have always said that the day they do eventually get their sh*t together, is the day when I will lose sleep - but that day will never come. It's a sad indictment on many of the staff who are truly professional, gifted individuals - sucked into a corporate, dysfunctional chasm.

I agree. I regularly have to advise my clients on contractor selection, and I invariably tell them to avoid the large national companies and utilize a smaller, local firm. Better pricing, better service, and you will typically remain an important client. Part of it comes down to the simple fact that with a small local integrator, the client is not paying for some high-rise corporate HQ, nor are they paying the salary of countless executives whose main purpose seems to be collecting a paycheck every 2 weeks.