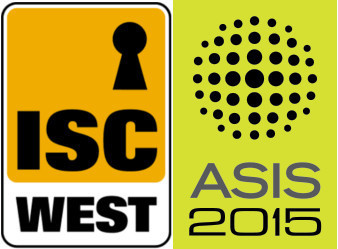 As much as manufacturers were upset with a weak ASIS 2015, they are cheering the results of a strong ISC West 2016.

In this note, we share survey results from manufacturers breaking down their satisfaction, with detailed color commentary, concluding with an analysis of the future of ISC West vs ASIS.

The chart below, summarizing the input of 70+ manufacturers, shows clear manufacturer trend: 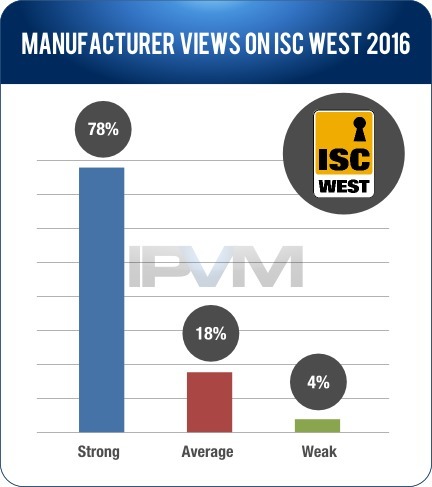 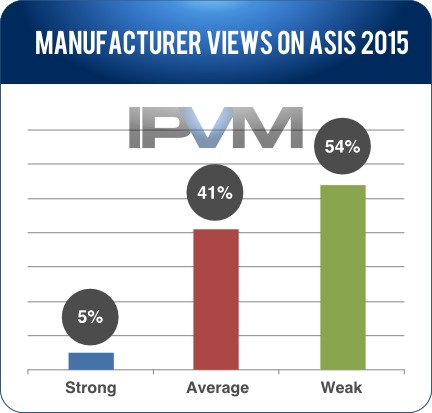 Manufacturers were quite effusive in their praise of ISC West:

Indeed, quite a number cited strong traffic from end users, a group who historically has been more commonly thought of as ASIS type attendees:

"I won't be back as an exhibitor. I spent three days demonstrating my new products to Chinese and Japanese manufacturers."

While this was clearly not the norm, we also saw many Chinese manufacturers visiting many of the smaller booths, an expensive and counterproductive trend for those receiving them.

By contrast, the typical ASIS 2015 manufacturer response was brutal:

ISC West is now 50%+ bigger than ASIS, both in attendee count and exhibition size.

This is similarly shown in the size of the exhibit floor, where ISC West dwarfs ASIS. Below are the two show's floorplans normalized:

Indeed, the true advantage for ISC West may be obscured because ASIS fills its show with numerous non-exhibitor booths to fill empty spaces (like 6 lounges, poster areas, etc.) while ISC West does not. Moreover, as the many large light blue spaces on the map above show, ASIS is still trying to sell off much of the show floor less than 5 months to the show's start (see ASIS 2016 floor plan).

We believe the #1 factor for ISC West's strength is ASIS's continued weakness. We do not see this changing for ASIS 2016:

ASIS will need to do something significant to counter this overall downtrend. As is, ISC West is setting up to dominate ASIS, a sharp shift from a decade ago when the shows were widely regarded as equals.