The IPVM team spent 3 days on the show floor going through what is new and what manufacturers are pitching.

Plus, we have been taking video throughout the show floor. Here is a look at the show entrance:

Inside, we have a whole show floor walk through (1 hour) and booth videos of 30 manufacturers, including Axis, Avigilon, Hikvision, Genetec, Milestone, Sony and many more.

Plus we have images, videos and commentary for a number of key themes:

This is it. 2015 is the year multi-imager cameras go mainstream.

Fisheyes panoramics are still useful but having 3 or 4 imagers side by side delivers far more pixel density / coverage area. Both will have their place, especially since multi-imagers are significantly more expensive than fisheye. However, for larger area / wide area monitoring, multi-imagers are going to become very common.

Some H.265 cameras are coming, but not a lot and almost all from Asia (see H.265 Cameras at ISC West). And major VMS support is still nowhere to be found. Because of this, 2015 will be, at best, experimental for H.265.

However, 'smart compression' with H.264 could be a very big thing quickly. We tested Axis Zipstream and it is legit, especially the savings from dynamic GOP.Hikvision says they are enabling similar smart compression. Other manufacturers, seeing the benefits, are already privately talking about enabling / upgrading their cameras to do similar.

We think that significant competitive differentiation on bandwidth / storage consumption could be a significant factor in larger deals as soon as this summer.

Continuing their tradition of women as props, VIPs at their event:

This marks 1 year since my #hangover event.. Same #party... @avigilon #avigilon I think I'… http://t.co/8GxRlCStYn pic.twitter.com/tJBaLgcBIP

So Austin Powers and Dr. Evil are lecturing on ONVIF, not kidding:

These stunts are best for organizations no one cares about or respects anyway. However, lots of people care about ONVIF but many do not trust it to work. Having a slapstick character present their offering does not solve that.

The Milestone coupon turns out to be even worse than what they pitched. Here's the offer: 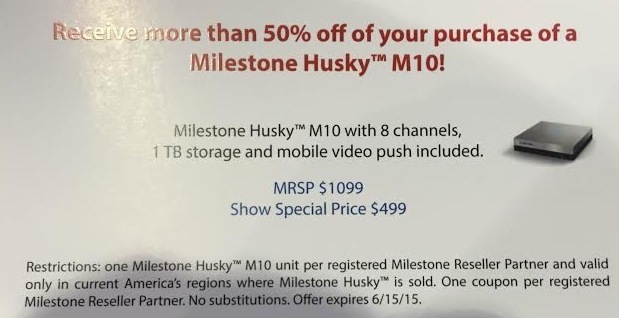 First of all, this is the old, soon to be replaced 1TB version, so you are getting something that they are getting rid of and is severely storage constrained. Two, at $499, it's not even half off the $899 online price that B&H Photo offers currently.

Despite a busy show floor on Day 1, the huge IDIS booth in the middle of the show floor had lots of people standing around, looking at their phones: 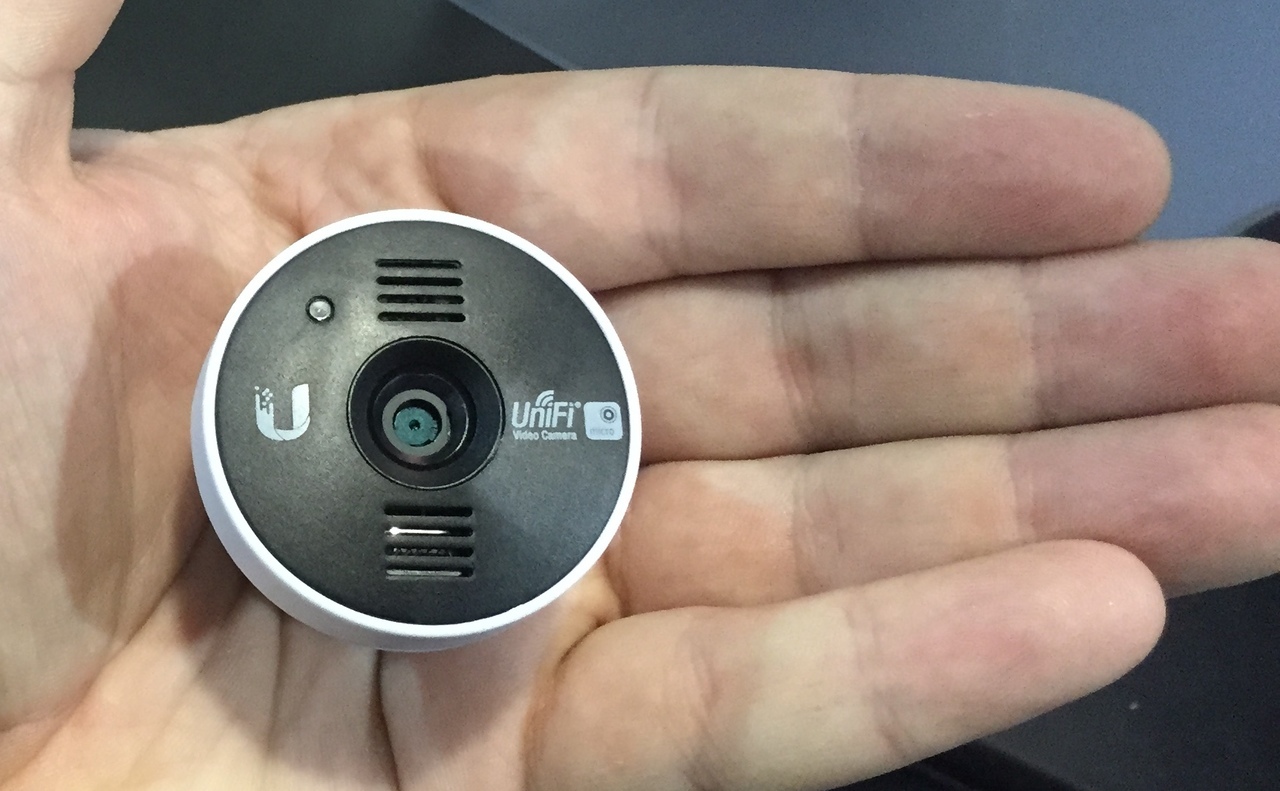 Moreover, it has a magnetic connection to its base, allowing for easy install, an approach we have never seen before.

IPVM is not the only one taking shots at Milestone (e.g., lame storage announcement, worse coupon promo).

Avigilon is showing the 7K camera. A few interesting things.

They are marketing it as 7K / 30MP, which makes sense and avoids the inevitable questions - what does 7K mean?

They are demoing the 7K camera on (4) 4K monitors to make the point that it so much more than 4K.

However, as their own video shows, the frame rate is very low (looks to be ~3fps):

This is how Axis was presenting their new 3 imager, 33MP camera: 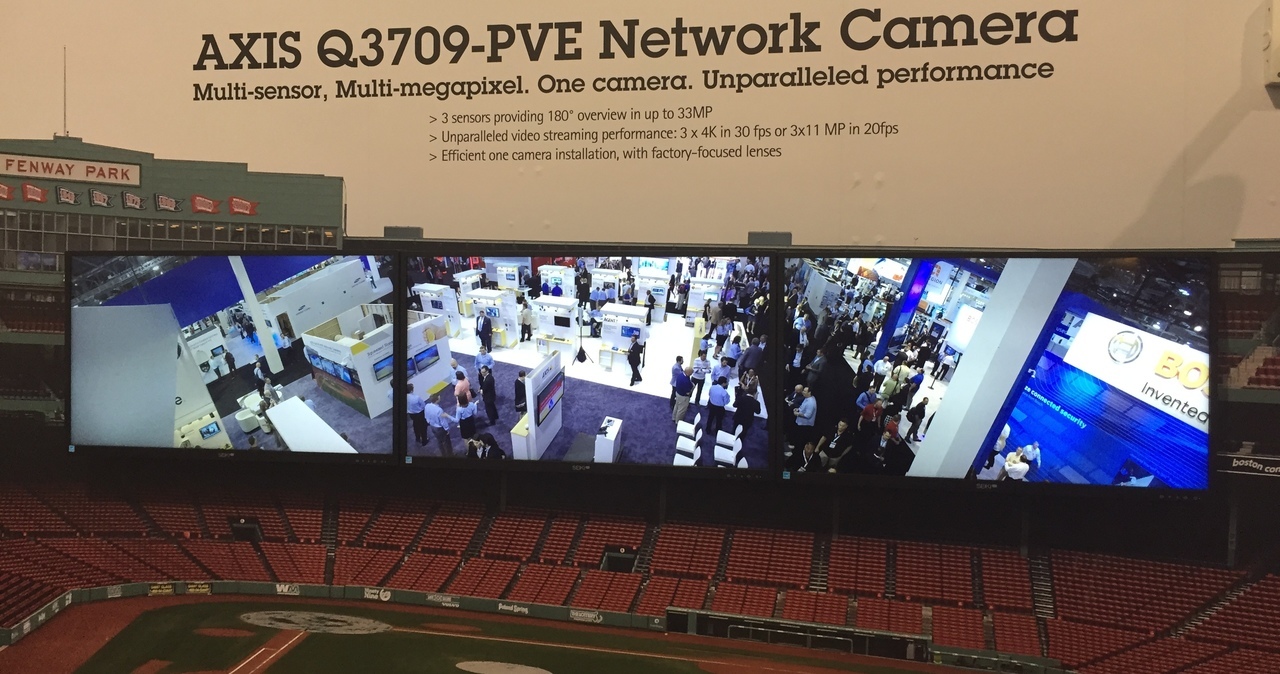 Axis new PTZs have a feature that manually (only) allows users to shake off water on the PTZ bubble. Here it is in action:

Canon and Milestone - Happy Together

Their booths are right next to each other, which is surely not a random coincidence: 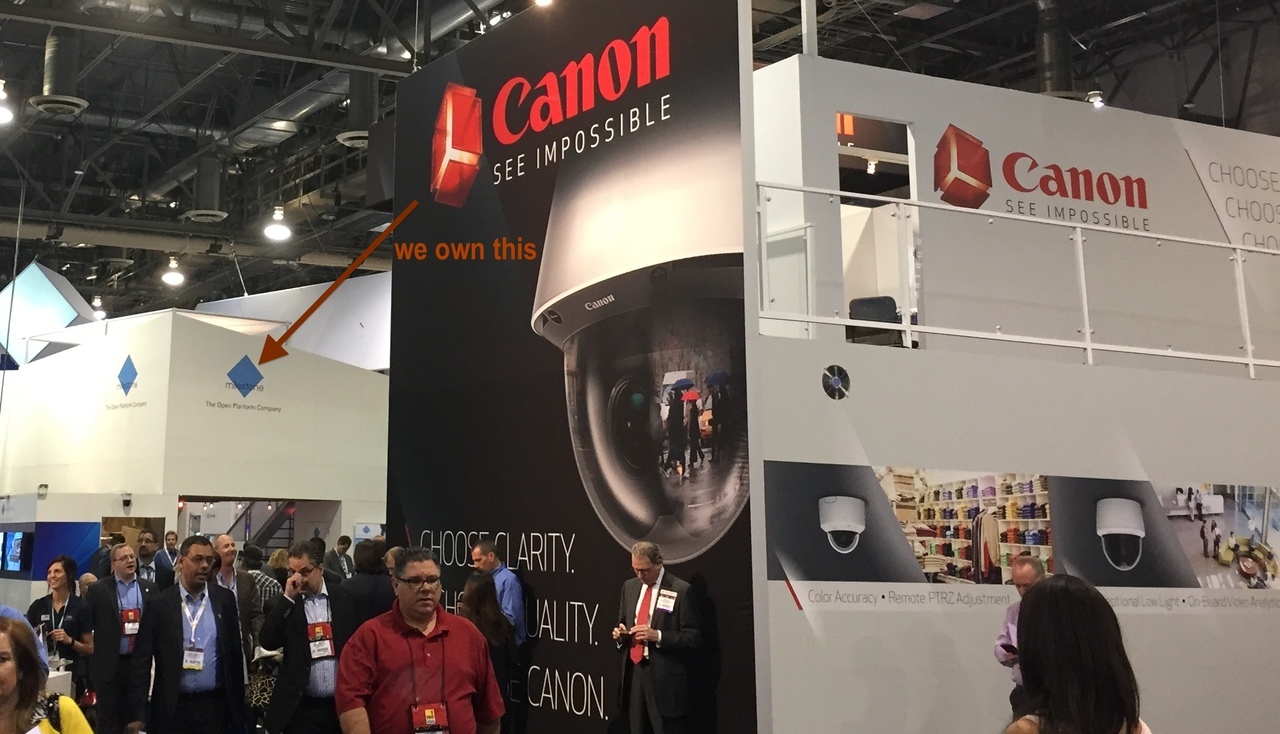 In fairness, there is a good 10 feet of carpet separating the self-proclaimed 'independent' subsidiary of the Japanese conglomerate.

IPConfigure, in either the craziest or most cunning marketing move of the show, has bought a huge banner at the front of the floor, declaring: 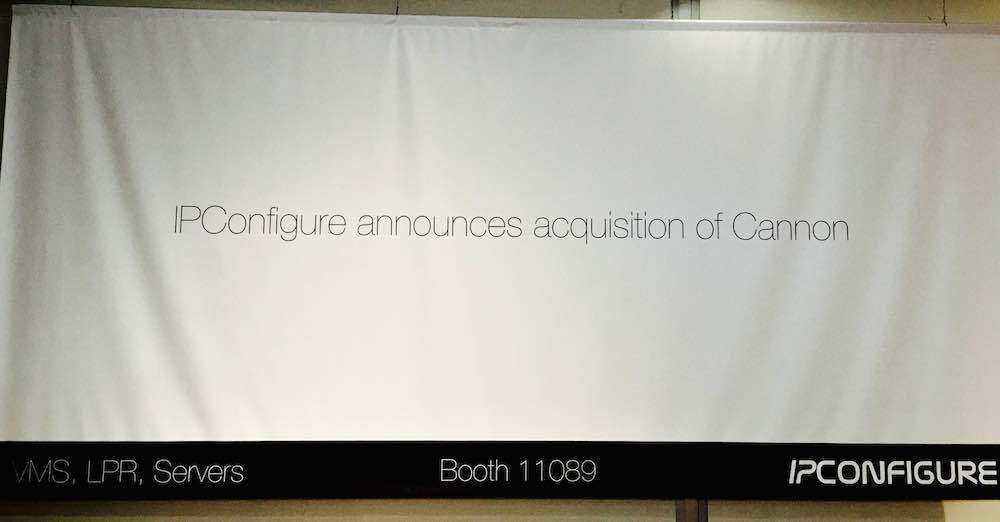 They have 'bought' a 19th century cannon in the 'defense of independent VMSes.' 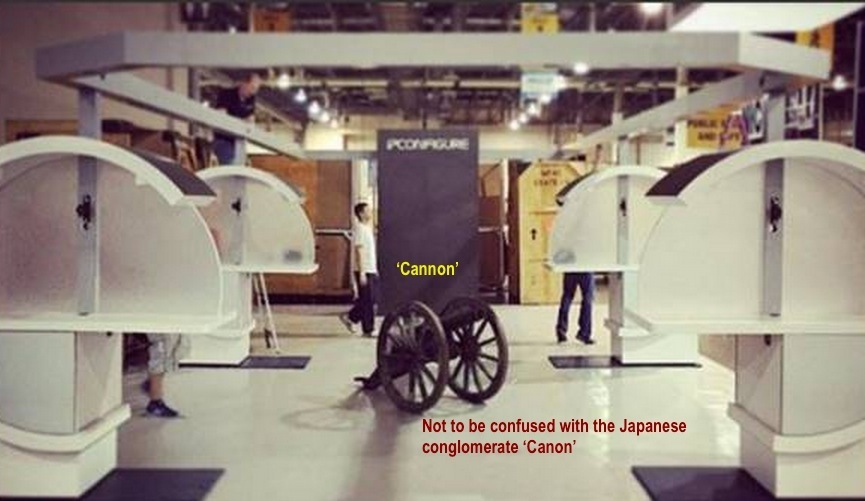 OnSSI is also joining in on the fun, leveraging their Seetec acquisition, to declare 'complete independence' from their former OEM partner:

There are elephant feet (paws, hooves?) all over the place, courtesy of Axis.

IP66 does not really cover being stepped on by an elephant.

Axis' soon to be parent company is throwing out mixed messages: 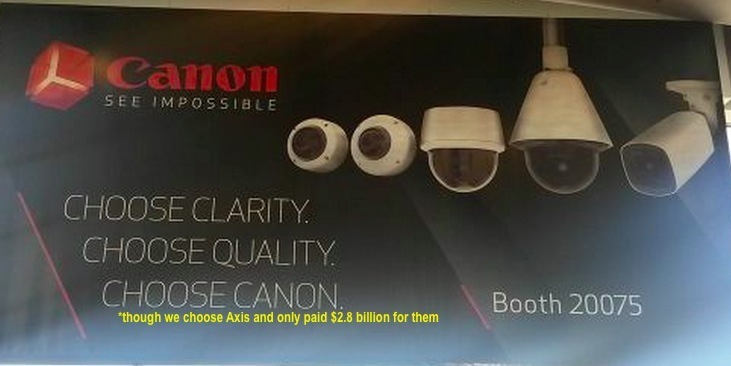 And Cisco must have had a committee of MBAs come up with this ad:

But don't go to Cisco's booth, because they don't have one (see above).

Samsung is excited about selling cameras for really cheap. 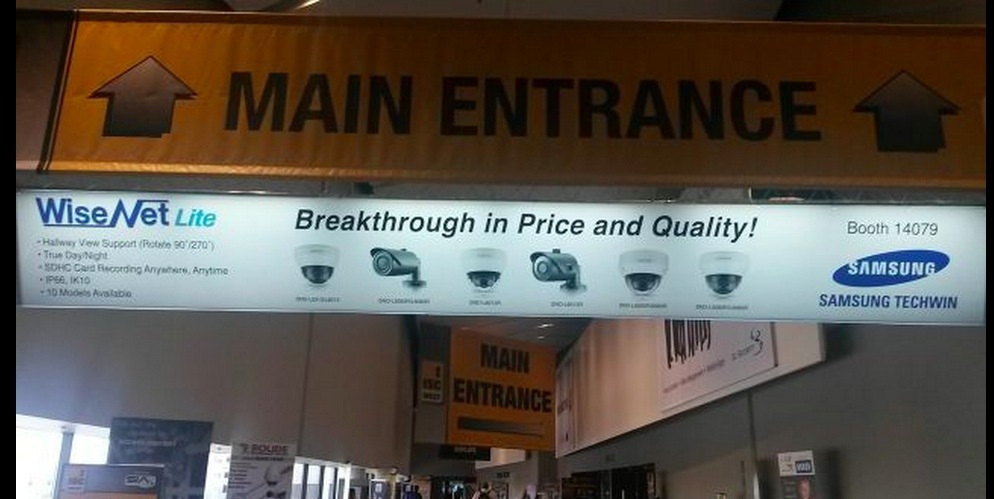 Listen, it's great for the market but a tolerance for lower profit margins is not really a 'breakthrough'.

Genetec's marketing people have evidently read a lot of Sartre:

Maybe Genetec can learn a thing or two from this company: 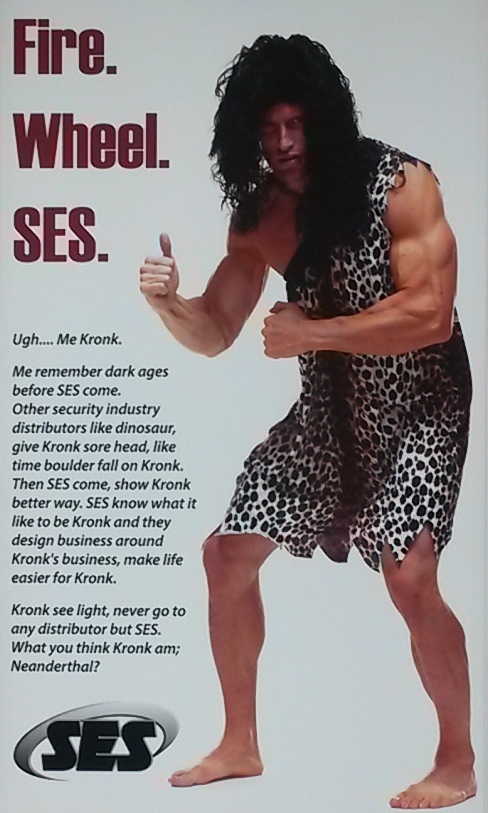 Is it worse to go right over your buyer's head or to just call them a caveman?

Avigilon, as usual, had banners in the airport, though they were text-only this year: 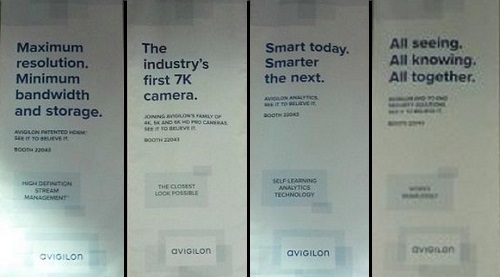 Much lower key than the 2013 one where they claimed to 'stop' crime which lead to the one-sided 'pissing contest'.

IDIS, the unknown company with the $200,000 booth is drawing attention with an ugly old-school form factor: 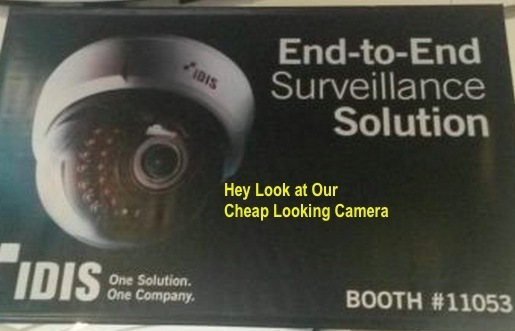 Dropcam came last year. Now acquired by Nest/Google, the whole band is back together:

Oh, behave! And stop by the ONVIF booth, booth 31087. pic.twitter.com/WqVXky1dwl

Finally, the show floor is shaping up to look extremely similar to last year - same layout / size and even most of the same booths are in the same spots. 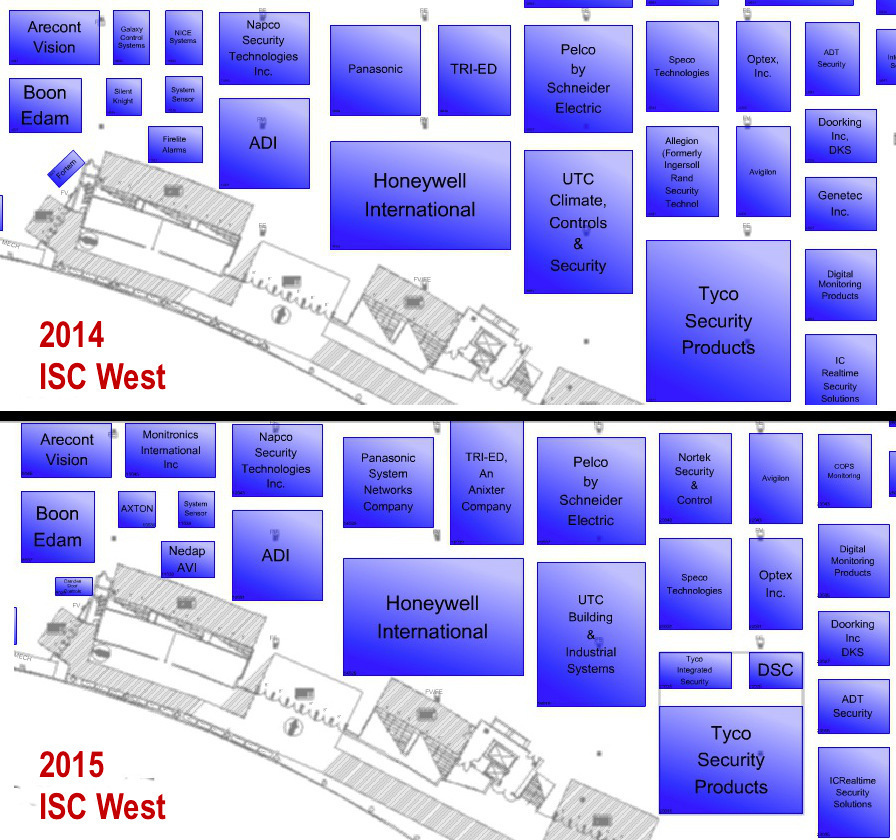 If you have a feeling of deja vu, that's why.