The world's largest online retailer wants to sell you security. Amazon, who sold over $60 billion direct to end users last year, wants to add security, surveillance, and home automation to your orders for books, movies, and breakfast cereal. Will customers change the security market by cutting out the multinational alarm companies like ADT, Vivint, and Protection1, and choose Amazon? We look at those dynamics in this note.

In the sections below, we detail three elements that provide an opportunity for Amazon:

Amazon offers a huge selection of household items, and has recently consolidated a new category called 'Home Automation' that includes door locks, security cameras, alarm systems, and smart thermostats. Traditionally, this mix of offerings has been the domain of security installers and dealers, but Amazon now lists over 4,000 'home automation' products it sells direct to end users: 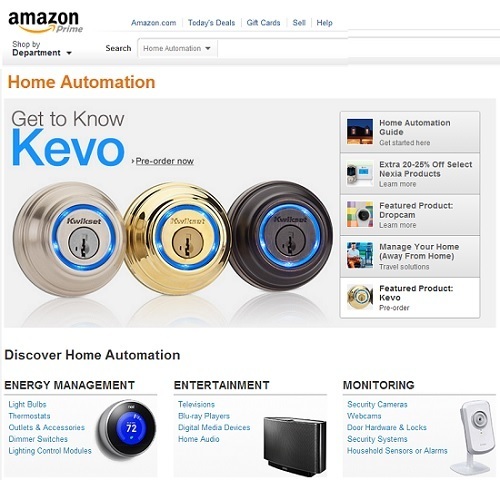 A quick check of the brands Amazon groups in their portal include industry names like:

Indeed, while these offerings are not traditional 'channel brands' with field performance that can be dubious or subpar compared with mainstream commercial offsets, these offerings are available to consumers with a huge upside: the purchase price is final.

While lots of companies sell alarm systems on line, most of them are niche players without much brand nor business with the average consumer. Amazon has ~200 million customers and an estimated 10+ million 'Prime members'.

That trust comes heavily from Amazon's customer reviews. Unlike incumbent offerings that are sold as 'all or nothing' prospects by alarm dealers to end users hoping for the best, products on Amazon sidestep 'caveat emptor' through making reviews a central aspect of all product pages. Consumers are able to find the best performers by reading direct, pointed feedback, that often reveals bad product despite whatever marketing is pushed. While Amazon Reviews are vulnerable to manipulation, they are central to the marketplace and not otherwise available for most home security products.

Buying directly from Amazon is that products come with 'no strings attached' - there are no monitoring contracts, hidden fees, and installation/maintenance service schedules to work around and endure. If a user wants an intrusion alarm, they simply pay to have it shipped and the transaction is complete, contrasted with an 'ADT Special' that ultimately costs thousands.

For many, 'doing it yourself' is an appealing alternative to the invasive models of the past. Rather that entering into a multi-year contracts with any number of alarm companies beset with insufferable customer service and class action lawsuits, Amazon is taking cues from what customers want: home security without being hassled by predatory alarm companies.

Obviously, Amazon's approach, even as it matures, will have significant limitations for those who want, and can afford, a turnkey, service with immediate live response.

Alarm dealers regularly bemoan the failure to penetrate more than 20% of homes. Most certainly, the cost, contracts and the complaints about alarm providers all contribute to this constraint.

Amazon, as it ramps up, will be most effective for non consumers of traditional access control and those existing customers who have lower needs and cramped budgets. While Amazon may take very little alarm business from the rich, it could prove to a major barrier to further growth or expansion of traditional alarm dealers.