Using IR is a very common way to improve night time lighting, especially with the proliferation of megapixel cameras. Two of the biggest downsides of IR is that it can be costly and cumbersome to add IR illumination. In this note, we examine camera housing that integrate IR for a potentially much cheaper and simpler deployment.

To date, there are two main techniques for adding IR:

We found two options: Messoa SLI070HB [link no longer available] and the Vivotek AE2000 (both approximately $250 online). These units consist of an aluminium outdoor camera housing with heater blower, equipped with a ring of IR LED's at the front of the housing. This setup allows any standard fixed camera to fit in the housing, and gain the benefits of built-in IR. The Vivotek housing is spec'd for 80m (260') illumination range, while the Messoa unit is spec'd for 70m (230'). As discussed in our IR Illuminator Performance report, we would not trust these range figures without testing, as manufacturer-cited ranges are often overstated.

Below is an image of the insides of the housing providing an overview of adding an IP camera to the unit: 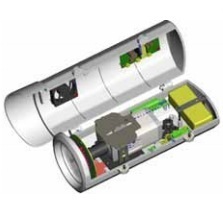 The main advantage of housings such as these is simplicity. Instead of mounting an outdoor camera housing, then mounting an IR illimunator along with it, the installer simply installs the camera in the housing and connects and focuses the camera. It certainly will reduce installation time, and simplifies cable management, since no cables need to be run between the camera housing and an exterior illuminator.

Additionally, it allows the user to select any preferred camera, unlike camera models with built-in IR. Typically, there are few cameras of this style in a given manufacturer's line. They also tend to be fixed lens, or short varifocal lenses, such as 3-8mm. Using a housing like this allows any camera and any lens to be used.

The main disadvantage we see is lack of flexibility. The Messoa housing has a fixed 50-degree angle of illumination, while the Vivotek is adjustable from 25-45 degrees. While these may cover many applications, external illuminators are available with angles from 10 to 180 degrees, so the illuminator may be adjusted to more exactly match the camera's field of view. Also, most external illuminators have output controls to allow the user to decrease output to only what is necessary. This is a key capability if hotspots and overexposed images are to be avoided.

Finally, while these housings both have rather long ranges, illuminators are available elsewhere with ranges of over 1000'. Most applications for fixed cameras do not require anywhere near that range, however. We would estimate that the 200' mark is more than enough for most applications. Even at that range, pixels on target is very small unless the field of view is extremely narrow.

When compared to most major-name exterior IR illuminators, these housings are much lower in price. A Raytec RAYMAX 100 FUSION illuminator sells online for $775. An Illuminar IR-312 series sells for approximately the same price. Models from YYTrade and the like are much less expensive, retailing for about $70, albeit without all the same features. Beware, however, because lower-cost IR illuminators typically have drastically overstated illumination ranges.

Standard exterior camera housings with heater and blower cost about $150 online, making the upgrade to these models with built-in IR about a $100 upgrade. At this price, one could practically purchase the housing, as well as a camera and lens before hitting the $900 mark. Add the increased efficiencies in installation, and the difference becomes greater, making the installation much less expensive overall.

That being said, as stated above, we recommend evaluation of these housings before wide-spread use. The big three names in illumination, Raytec, Bosch, and Illuminar, all are known for having a more even output than less expensive illuminators, resulting in fewer overexposed areas. Without careful application, IR illumination can be just as bad for image quality as low light conditions. We also cannot state enough that manufacturer specifications for illumination range are often overstated by 50% or more. Simply put, installation efficiencies and lower overall cost won't matter if the illumination just doesn't work.