[UPDATE: This is from 2011, for newer statistics, see our Integrated IR Camera Use Surging report.]

In response to the first question, nearly 62% of respondents answered that they regularly or sometimes deploy IR illuminators with outdoor cameras. The remainder rarely or never used IR illumination. 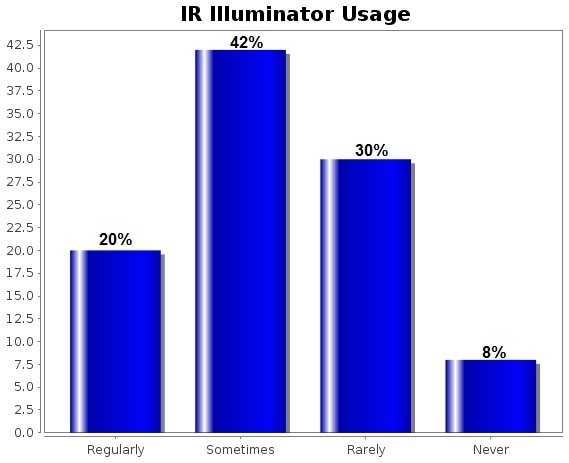 One might expect that the shift from SD resolution to HD or megapixel has driven some of this adoption of IR illumination, due to megapixel sensors' lower sensitivity. However, respondents who predominantly deployed SD cameras were just as likely (less than one percent variance) to use IR illuminators as those installing more megapixel cameras. Variables such as system size, geographic location, and preferred IP camera manufacturer also had little effect on these percentages. 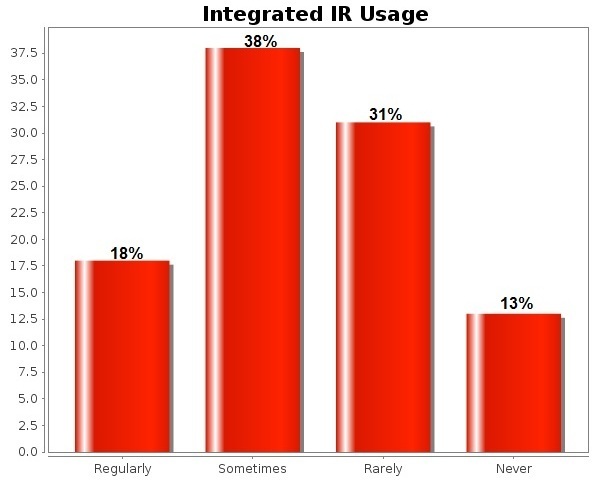 The number one reason given for using these cameras instead of a camera plus external illuminator was cost, as evidenced by the following comments:

Those against built-in IR had multiple reasons, with the top two cited being performance and flexibility:

It is true that a main concern with built-in IR is performance. Manufacturers routinely overstate IR throw distance in their specifications, as we have discussed before in our IR illuminator performance tests. Built-in illuminators are also rarely adjustable in their angle of illumination and power output. This could lead to the illumination not matching the camera's field of view, or overexposing the image.

As one respondent noted, insects and spiders can be an issue when using IR-equipped cameras. We discussed this in a recent LinkedIn discussion [link no longer available], along with possible solutions.

Those using built-in IR cited a handful of manufacturers. Some experiences were neutral, citing that the IR was useful in limited FOVs:

With one disappointed experience with ACTi:

Sony received the most positive mentions, with their fifth generation fixed outdoor cameras (dome and bullet) all featuring built-in IR:

It's worth noting that Sony's IR-equipped cameras also feature "smart" IR, which reduces power to the LEDs as subjects in the FOV near the camera. This is intended to reduce overexposure, and may be one reason for more positive reviews of their built-in IR.

US vs. International Preferences

Built-in IR is far more popular in the United States than it is in the rest of the world. The most significant difference: 23% of US respondents stated that they regularly choose built-in IR vs. only 6% of international respondents.

[UPDATE: This is from 2011, for newer statistics, see our Integrated IR Camera Use Surging report.]