Just a few months after introducing aggressively priced VGA IP cameras, Samsung is looking to do the same for megapixel. Is this pricing attractive enough to differntiate within the most competitive segment of video surveillance? In this note we take a look at Samsung's new offerings and compare them to other inexpensive MP cameras. 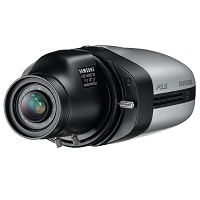 Several models of Samsung's value-line iPOLiS series [link no longer available] have been introduced with 1.3 and 3.0 megapixel resolutions. These new models are available in box and dome form factors. All models are day/night (electrical, not true day/night), support H.264 and MJPEG streaming and ONVIF.

The six models comprising this release are:

Compared to rival 1.3MP cameras, Samsung's new line is priced among the lowest-cost competitive models, at least among major manufacturers:

Based on these prices, Samsung's new line is in line with ACTi's TCM-5111, and about $100 less than Arecont, the second-least expensive. Also, it is priced about $200 below most mainstream models, including Samsung's SNB-5000, its current 1.3MP model. Note, however, that the SNB-5001 provides electrical day/night only, while most of these competitors (except the Axis M1114, which is color only) provide true day/night functionality with a mechanical IR cut filter, which generally provides much better nighttime performance.

Notice the sharp increase in rival 3.0 or equivalent MP cameras:

Even adding $100 for a megapixel-rated lens, the SNB-7001 is priced below ACTi's 4MP KCM-5111, and substantially ($200+) below most other 3MP models. Note again that the Samsung model provides only electrical day/night, instead of a mechanical filter, which will be of more detriment at this higher resolution.

The ultimate success of this offering depends upon the performance and build quality of the cameras. The Samsung name provides a familar brand among lesser-known Taiwanese cameras, which may diminish the perceived risk in using them.