Setting up cameras is often a pain.

A number of test tools exist but are frequently limited on camera support or have a small screen, slow interface or other issues. Many installers still use laptops, even though they are inconvenient or risky when working from a ladder or lift

Now, a new tester is getting a lot of interest from IPVM members.

This tool claims to do it all - IP, ONVIF, AHD, CVI, TVI, plus PoE out for IP cameras and more.

We bought one, the IPC-8600-ADHS, and tested it out. This video overviews the unit itself:

Inside, we provide detailed analysis and 5 more videos explaining if you should use it, what works well and what issues you may face.

The IPC camera tester was generally useful, with a larger, more responsive interface, better ONVIF support, HD analog capability, and additional utilities such as IP/port scanners, cable toner, and wiremap tools not found on other models. Additionally, dedicated zoom and focus buttons made camera aiming with the tester simpler than others which used on screen controls.

In our tests, we saw few camera compatibility issues, with nearly all ONVIF cameras working properly. Some high resolution (4MP, 4K, etc.) models took longer to load than 1080p/720p models, but once loaded worked without issues.

However, users may need to reference the tester's documentation or expect some trial and error as some UI elements are poorly translated, and some app functions are unclear or duplicated. Note that some direct camera drivers are available (via "IP Camera Test" app), but we found the driver list to be very outdated, containing many discontinued models, with newer ones missing.

Most importantly, the device's support is likely to be limited given how it is sold (indirect via numerous re-labelers).

Numerous OEMs / Re-Labelers for This Product

There are easily 10 or more companies re-labeling this device and re-selling it throughout the world. From what we have seen, these are basically all the same products but, if one of those companies, provides you good technical support, it might be worth it buying from them.

The original manufacturer of these testers is Guangzhou Wanglu [link no longer available], a specialist tester manufacturer who does not appear to sell under their own brand, direct.

We purchased our tester for ~$420 USD on Amazon. Ours was sold as the Woshida IPC-8600ADHS, but labeled KKMoon when it arrived (though no manufacturer is listed on the box or other documentation).

Other models are available which vary in price depending on features. Some include a digital multimeter for electronics testing, while others include fiber optic test ports, as well. The most expensive, fully loaded version (multimeter, HD analog, fiber optic options) sells for ~$650 online.

The tester consists of a 7" touchscreen with dedicated buttons for up/down/left/right and enter, as well as focus and zoom controls, menu buttons, and more. This differs from other testers (see our Tatung test) which included only the touchscreen, with all other controls on screen.

On the bottom of the unit are connectors for LAN and PoE, as well as cable testing (wiremap and locating/toning), and low voltage poer. On the top are standard and HD analog inputs, as well as an analog output.

We review physical features of the tester in this video:

The tester can be held in one hand or worn via neck strap for hands free use. The strap holds the tester at a viewable angle so the installer may keep their hands free to aim/focus cameras, etc. 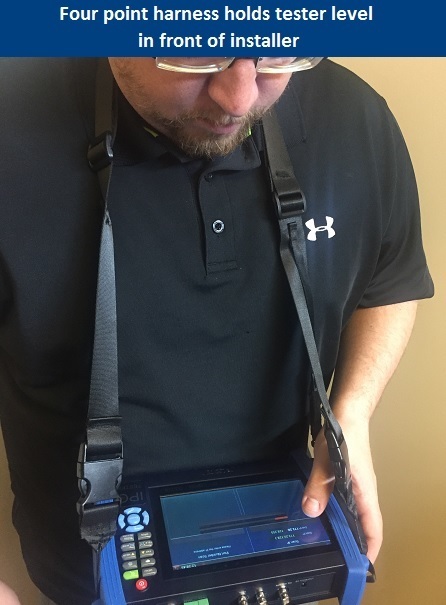 Unlike normal products, which display both the manufacturer and model number of the item, the IPC shows neither, making it quite generic and abnormal, as shown in the video below:

The tester may power camera in one of three ways:

Both PoE and 12VDC power are activated via a dedicated app, aptly named "Power Output". Users simply turn them on/off via on screen switch:

In our tests we found the tester's ONVIF app(s) to be most useful. The app, which has an interface very similar to ONVIF Device Manager, automatically detects ONVIF cameras on the local network, or they may be added via IP address. From this app, users may perform some camera setup, including basic CODEC and image quality adjustments, configuring users, setting time servers, etc.

Note that the IPC-8600ADHS also includes an app simply called "IPC Test" which has multiple direct cameras drivers. However, we found this list of drivers to be outdated, with many discontinued models and missing many newer ones.

Additionally, viewing apps are included for some manufacturers, such as Hikvision's iVMS-4500 and Dahua PSS, as well as a number of lesser known names. However, these apps are for viewing only, and do not include configuration options.

Our tester model includes three separate apps for viewing AHD, CVI, and TVI cameras. These apps allow for live viewing as well as remote focus/zoom and PTZ controls. We were unable to control cameras' on-screen menu via the tester, however.

We review HD analog support in this video:

The IPC-8600ADHS includes multiple IP utilities, including an IP and port scanner, ping, tracert, and more, reducing the need for a laptop in some cases where these tools would be used.

In our tests, we found the IP and port scanner worked well (and is most likely to be used), though with few configuration options. Users may not select a range of ports to scan. Instead, the tool simply scans all 65,535 ports, which takes several minutes to complete.

We review these apps in this video:

Like many other Chinese OEM products we have tested, there are several instances where poor translation may be unclear or confusing to users.

For example, the "Software reset" option of the ONVIF camera app reads as follows, which essentially means that some user settings will be retained, while others are factory defaulted:

Also, when checking for app updates, we got this error message, essentially meaning no updates are available: 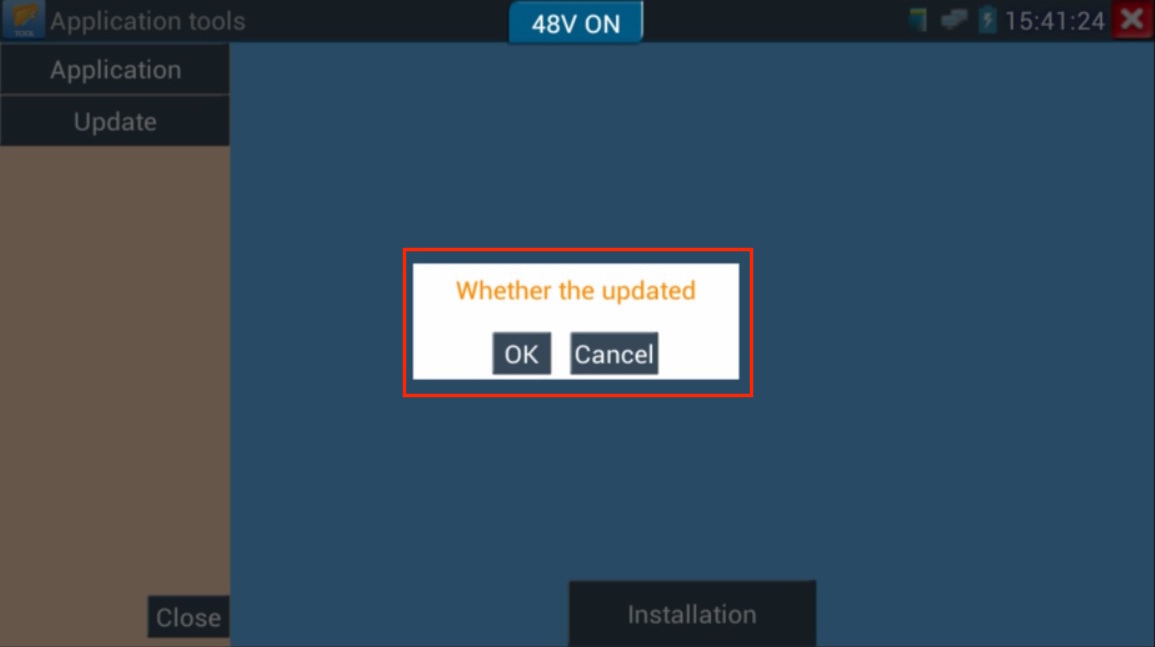 Users may find themselves frequently consulting the manual (moderately more informative, though still poorly translated) or simply figuring things out via trial and error.

There are several apps included in the tester with unclear uses, even once opened, and little documentation in the manual or on-board help, which may confuse many users.

For example, an app simply called "Data" appears to allow sending/receiving of RS485/RS232 data, though this is not clear in the app itself. 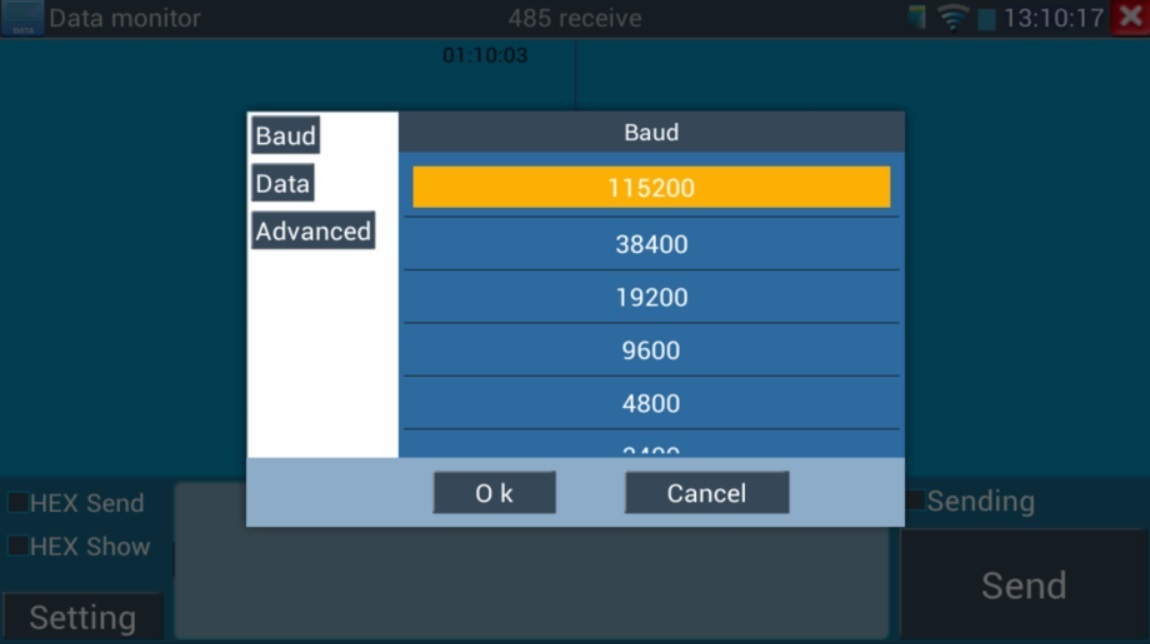 Another called "Link Monitor" actually is used simply to see if an IP address is in use, a function which is essentially duplicated in the IP scanner utility, a far more useful app, as it scans entire IP address ranges and allows port scanning. Users could also simply use the Ping app to ping the desired address. 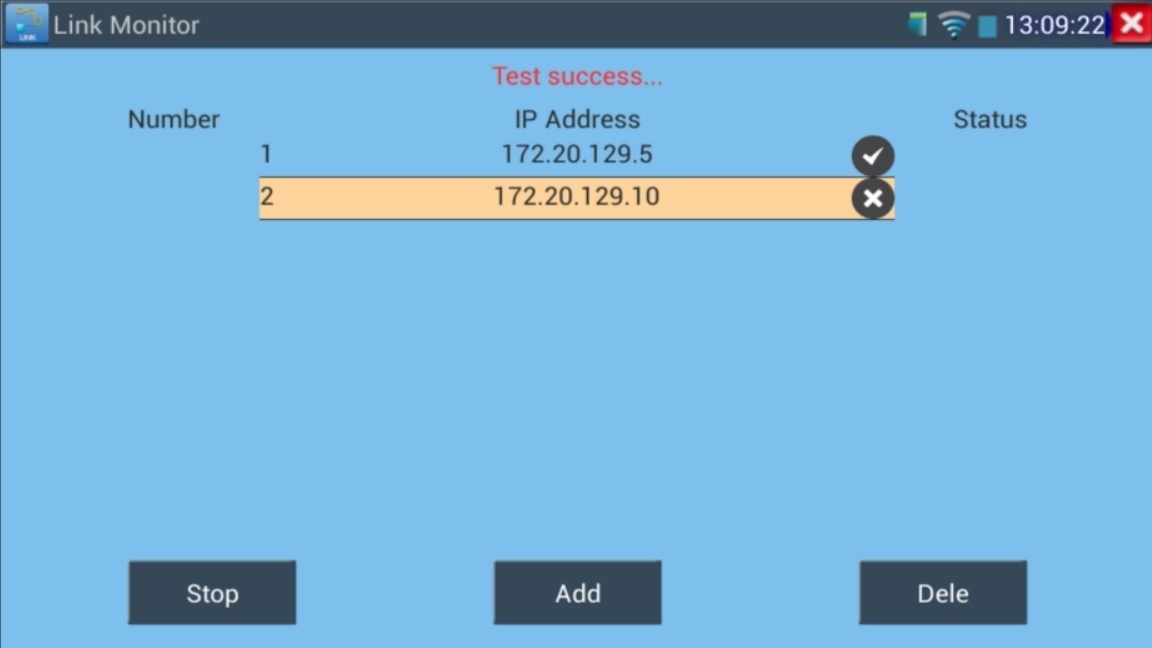