Integrators frequently cited insufficient installation tools as one of the key problems of IP camera installation. While many use a laptop, the size and necessary accessory devices to do this make it cumbersome.

We bought a new device from Tatung called the TOM-0431IP. What is different about this from other IP camera install tools, is that combines a computer, monitor, battery, switch all in a relatively small device that you can strap to your wrist, as shown below in our test setup: 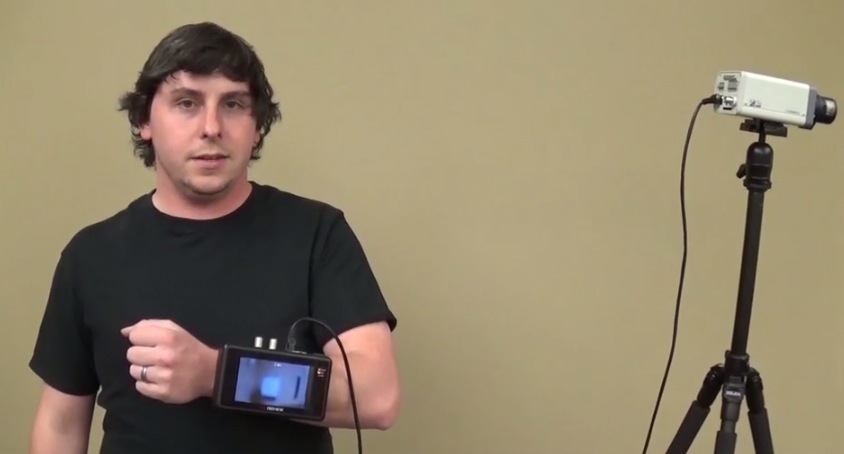 It is a neat concept but how easily or hard is it to use?

Here are the key findings from our test of the Tatung TOM-0431IP:

The TOM-0431IP is useful for basic aiming and focusing of cameras, essentially the IP equivalent of portable analog monitors used in older systems. The unit was comfortable to wear and simple to position so both hands may be used while aiming/focusing, but still keeping it visible to the installer.

The main limitation is in adjusting camera settings aside from aim and focus, which requires using the device's web browser, which is limited due to its small screen and lack of browser plugins.

Another limitation is outdoor use, where glare on the screen was significantly worse than using an iPhone (images further down).

If manufacturer-specific Android apps allowing access to these settings were released, the TOM-0431IP would be much more useful as an all around setup tool instead of simply a focusing display.

In this video we review the physical construction of the unit, its ports, and function buttons.

The wrist strap allowed for multiple positions on the installer's wrist or forearm, so the unit could be rotated to a usable position while both hands were in use. We were able to aim and focus cameras using both hands on top of a step ladder without issue.

However, the unit's screen is very reflective, and sunlight and bright office lights both caused glare issues. The image below shows the TOM-0431IP with brightness max next to an iPhone 6 at about 50% brightness. Both displayed the same image taken while aiming a camera, held at the same angle, with the TOM's screen almost totally obscured by glare, while the image on the iPhone was moderately visible.

In these videos we review the operation of each of the TOM-0431's features, including adding cameras, viewing cameras, differences using ONVIF, viewing saved snapshots/video, testing cables, and more.

The device also supports saving images / videos for later retrieval, like so:

Android Based / Using Other Apps

Since the TOM-0431IP is Android-based, using apps aside from Tatung's own is possible. We were able to install two third-party camera viewers which supported digital zoom (and PTZ control), eliminating one key shortcoming of the native app.

In this video we demonstrate a popular viewing app, IP Cam Viewer, which allows digital zoom, as well as using the built-in web browser to adjust camera focus.

Manufacturer specific apps which allow access to specific camera settings are possible, such as the companion app for the Axis T8415, but not yet available. Additionally, the TOM-0431 runs a dated 4.X version of Android (5.1.X is most current), so future app compatibility is not guaranteed.

IP Camera Installation Tool Shootout - Avigilon, Axis, Ideal, Hanwha, Triplett, Veracity on Oct 23, 2018
Setting up IP cameras has historically been challenging, with techs often...
Universal Camera Tester Tested (IPC-8600) on May 20, 2016
Setting up cameras is often a pain. A number of test tools exist but are...
Comments (8) : Subscribers only. Login. or Join.