How much power an IP camera consumes is important, especially since most PoE switches have limited power budget and do not support max 15W to all cameras, making PoE Power Problems commonplace.

However, these problems can be mitigated by measuring power usage.

In this guide, we:

Here are our key findings from this test. 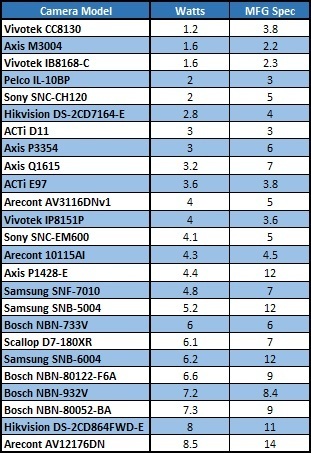 This chart compares our results of integrated IR cameras, displaying the wattage difference between IR on vs off, and are arranged by manufacturer spec'd power consumption:

With four live streams running at once, power consumption was impacted differently between cameras with marginal increases. Roughly 25% of cameras tested did not increase in power consumption, such as the Samsung SNB-5004, Sony SNC-EM600, and the Hikvision DS-2CD4132FWD-IZ.

The Vivotek FE8181 had the highest increase in power consumption from 2.7 to 3.2 watts, a .5 increase. No other camera tested increased as much.

Using the Byte Brothers POE Power Panel [link no longer available] (Online ~$130 USD), we measured power consumption from different IP cameras. As expressed in our key findings, it is important to wait ~30 seconds before recording a wattage. IR cameras boot with IR on, and will adjust to day mode/IR off if set to do so. In this video, we review the features and functions of the Byte Brothers Power Panel and demonstrate its use.

This example shows consumption of the Hikvison DS-2CD864FWD-E at boot: 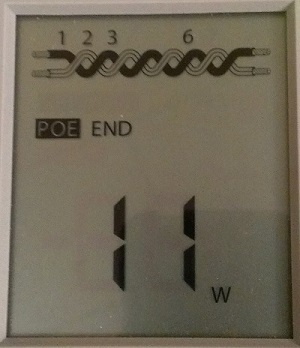 And again, after settling to its nominal wattage: 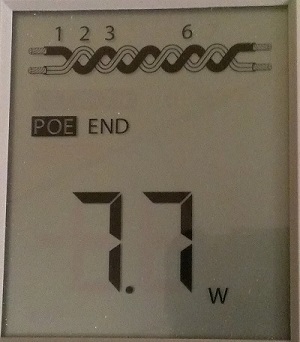 Aside from the Byte Brothers Power Panel, several options for PoE testing are available, such as:

IP Network Setup Guide for Surveillance on Apr 06, 2015
In this guide, we teach the fundamentals of setting up an IP video...
Comments (5) : Subscribers only. Login. or Join.