Using IP cameras in intercom applications can be intriguing when only a few stations are needed because it can eliminates a seperate system. Even though seperate intercom systems exist, like those covered in our Stentofon Pulse and Designing IP Intercom System notes, modern IP video systems can be easily adapted for basic intercom function. Constructing a intercom station using an IP camera takes three major forms:

Units with Microphones/Speakers onboard: While cameras containing built in microphones and speakers seem to be the easiest answer, those compnents lack the fidelity quality and range required to clearly understand human voices. Frequently, the onboard mic provides the ability to detect noise, but lacks the ability to discern what is being said. Likewise, the speakers included onboard cameras often lack the amplification and projection to be heard at listener level when hung at typical mounting heights. These units also require rigging up an external 'call button' in order to be used as traditional intercom stations. The image below is an example of one of these units: 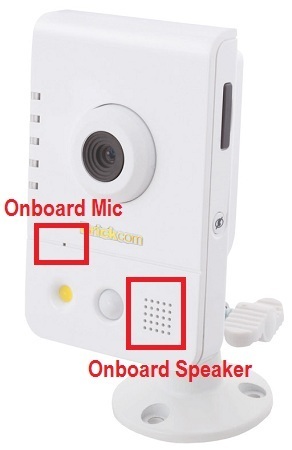 Specialty Door Station Units: Devices specifically designed for use as intercom stations are available. Notable examples of the Mobotix T24 'Door Station' and the Speco Technologies 02S1 [link no longer available]. While these units are examples of units described above, they often include specific intercom features like call buttons, wide angle/hemispheric lenses/ and amplified speakers and microphones. Unlike the 'video intercom' units produced by mainline intercom manufacturers, these units feature better quality cameras more easily incorporated into surveillance systems. The image below is an example of a specialty unit: 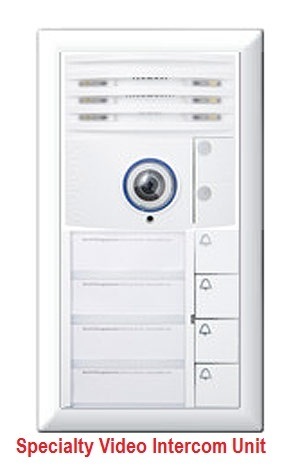 Units with I/O Ports: Even 'standard' surveillance cameras often include the provision to be integrated as intercom stations. Provided cameras have audio input/ouput ports, they are able to be connected to 3rd party intercom stations. It is common to find cameras that only contain only audio input or output ports, and in that case the camera is only able to be used "audio in" only operation. Even cameras feature both ports may only support 'half duplex' operation. Lacking the ability for operators to simultaenous be heard or to hear, at the camera may/may not be an issue, but most intercom systems support 'full duplex' operation. In the picture of the camera below, the audio ports are labeled, along with the general 'Component I/O' port used to tie in components like intercom call buttons or door contact switches: 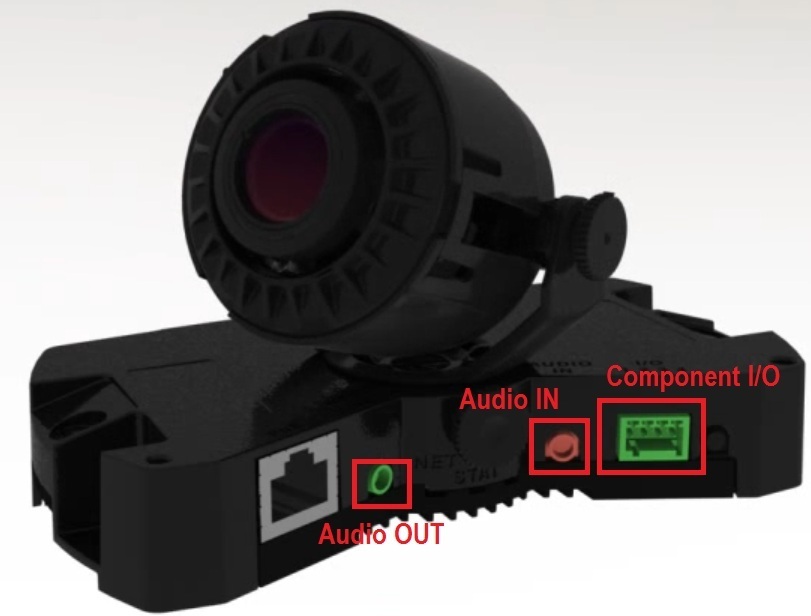 Regardless of how well the hardware performs, it must be accessible by an operator. This sometimes is where intercom/IP video surveillance systems diverge. Not all VMS systems support two-way audio function, as we noted in our "Single IP Camera / Intercom Station" note. Understanding how this particular interface will work can significantly affect which approach is best.

If the VMS cannot be used to operate an IP Camera Intercom function, then a camera's 'Live View' webpage can be configured to provide the function.

In general, IP Camera Intercom stations can be put together for under $500 per camera. Considering that most specialty IP intercom systems cost around $1000 per station, piecing together a 'custom' system for one or two stations can be a significant cost savings.

However, for large, multi-station intercom systems or those systems requiring complex routing, the IP Camera based solution will not provide advanced functionality.