Now, the question is whether these new models can fill the gap left by Avigilon's acquisition of VideoIQ. 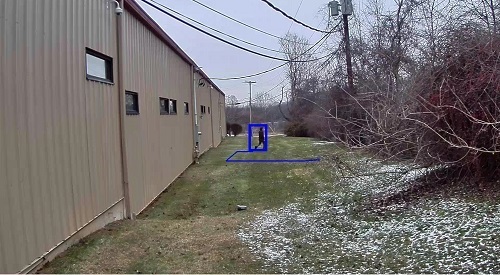 We tested the ioimage HD camera day and night to answer the following questions:

DVTel's ioimage HD camera provides long distance detection combined with low false alarm rates, similar to Avigilon's analytic cameras. Care should be taken to orient the camera so subjects cross the field of view instead of toward the camera wherever possible, as detection range when approaching is substantially reduced.

However, unlike Avigilon, these cameras require manual calibration, a process which is often as much of an art as a science. Users should expect trial and error to verify and re-verify proper calibration, or objects may be detected improperly (people as vehicles, small animals as people) or not at all.

Finally, VMS integration may be an issue for those using platforms other than DVTel's own Latitude line. Other VMSes integrate events via ONVIF, which few VMSes have completed.

Analytic calibration is a 10-15 minute process which requires a human subject to walk through these scene, used to calculate size, as well as some distance measurements, camera mounting and horizon height.

Setup guidelines are given at each step of the process, but despite this, we regularly received error messages that calibration was not clear and should be rechecked. Redistributing human measurements and adjusting distance markers  often cleared this up, but not always. While we recommend adjusting calibration to solves this problem when possible, we found in multiple cases that the camera still performed well even with supposed unclear calibration.

Rule setup is similar to many analytics, allowing users to define the detection area, object or objects to detect, trigger delays, and actions. Additionally, ioimage allows fine tuning of object size and distance traveled, both in general terms (small, medium, large) as well as very specific square footage sizes, more complex than most analytics we have tested.

By default, the ioimage HD camera embeds bounding boxes (drawn around detected objects) and direction of travel trails in the video. These may be configured to display as specific colors, all one color, multiple colors, etc., with trail length configurable, depending on user preference and speed of objects. The camera also overlays alarm information such as tampering, low visibility, etc., directly on the video.

This video reviews setup of these OSD options:

At the time of our test, ioimage HD's analytic events are integrated only with DVTel's own Latitude VMS [link no longer available]. Other VMSes may integrate them via ONVIF's Video Analytics Service, but none of the major VMSes have done so. DVTel tells us they are currently working with third party VMSes to speed adoption, though no release dates were given.

This test scene was selected as it best represented all of the above false alarm issues, with human and vehicle traffic, foliage, and small animals present in a typical commercial application. 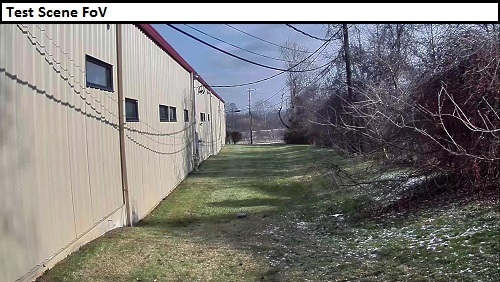 We calibrated and tested in this scene twice, as performance was initially poor. After recalibrating we found two key issues which seem to most impact calibration.

First, upon closer inspection, we noticed a human marker in the background was above the ground plane and thus too deep in the FOV. Though this difference looks very slight, at this distance it can skew the expected size of a human subject greatly.

Second, distance guidelines were not quite accurate. A measurement to the corner of the building was slightly off. As with the human marker, being even a few pixels off at this distance (this marker was ~260') can skew distance estimation and reduce accuracy.

After resolving these issues, with markers distributed across the scene, detection accuracy improved greatly, with low false alarm rates and much better coverage range.

The ioimage HD camera produced very few alarms over the course of our testing, similar to or lower than Avigilon's H3A analytic camera. Common sources such as reflected lights and swaying branches triggered few false alarms, about 1-2 per day in our test scene. Small animals, debris, and dust triggered no alerts.

The branches seen in the foreground very rarely triggered false alerts, only once during testing under normal wind conditions. When manually shaken to create greater movement, false alarms were triggered, but this would require extremely strong winds to occur naturally. 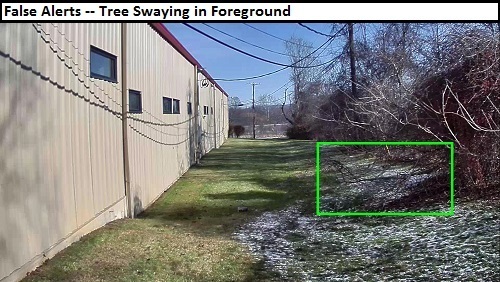 Occasionally, multiple objects were seen as one, triggering an alert due to the larger overall size of the object. This was most common in 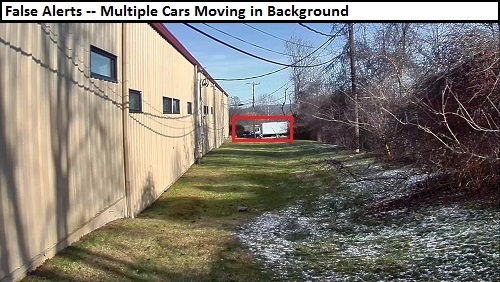 After calibrating and verifying configuration of the ioimage HD camera, it was capable of detecting a human subject across ~300' HFOV width, wider than the Avigilon H3A camera, which covered ~250' HFOV. This detection was achieved when the subject was crossing the field of view. 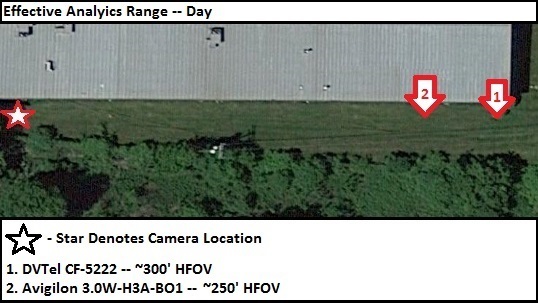 At night, the ioimage HD camera again had greater range than the Avigilon H3A camera, covering ~230' HFOV vs. ~150'. 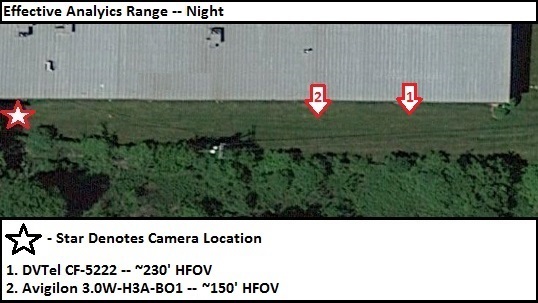 Detection range of the ioimage HD camera was drastically reduced when the subject was walking toward the camera instead of across the FOV. These issues are common in analytic systems, though typically not as drastic as seen here.

For example, during the day, the ioimage HD camera reliably detected our subject at a 300' HFOV width when he was crossing the FOV. However, when he was walking directly toward the camera, detection range dropped. In some tests, coverage width was as little as 30' HFOV, while in others it was up to 100'.

Directory Of 150 Video Analytics Suppliers on Dec 17, 2019
This directory provides a list of video analytics providers to help you see...
FLIR Launches Saros on May 01, 2018
Has FLIR solved the video intrusion / remote monitoring problem or have they...
PureTech Video Analytics Examined on Apr 21, 2017
PureTech's analytics were chosen for a US border protection system (see...
FLIR Acquires DVTel on Nov 30, 2015
Originally a thermal imaging specialist, FLIR is making a major expansion...
Axis Video Analytics Are Weak on Oct 05, 2015
For more than a decade, video analytics has frustrated and disappointed...
Axis Releases Their Own Video Analytics on Sep 28, 2015
After years of promoting third party video analytic applications and...
DVTel Hires Avigilon and Genetec Sales Leaders on Aug 28, 2015
DVTel Raised $9 Million this year and now they are starting to put that money...
DVTel's $9 Million Fund Raising and Future on May 20, 2015
DVTel's CEO tells IPVM that they have completed a 'turnaound' and that they...
ioimage / DVTel Analytic Updates on Feb 20, 2014
In the 4 years since DVTel Acquired ioimage, they have gone quiet but...
Comments (5) : Subscribers only. Login. or Join.