Arming and disarming are the most fundamental tasks in intrusion systems. Keypads are the most common way to accomplish this, though the sheer number of styles and models available may be daunting for those new to the industry. Key switches and card readers further complicate the options.

In this guide we outline each of these types of arming/disarming systems, where they are typically used, and why:

Before moving into the styles of keypads, it is worth noting that keypads are manufacturer specific devices, unlike many intrusion devices (sensors, sirens, etc.). Because each uses a specific proprietary wiring scheme and communication protocol, they cannot be used on another manufacturer's panel.

The various styles of keypad covered in the guide are summarized here, including their typical applications and cost, as well as how difficult each style is for users to operate. Note that these are guidelines only, and exceptions exist (some touchscreen may be complex, or zone keypads may be easy to use, for example).

Alphanumeric keypads are most common in commercial intrusion systems, and consist of a multi-line display which shows verbose system and zone status information, with customizable labels for easier use. Typically, several dedicated function and panic buttons are included as well to arm away or stay modes, bypass zones, call fire or police, etc., a feature not common on other keypads. 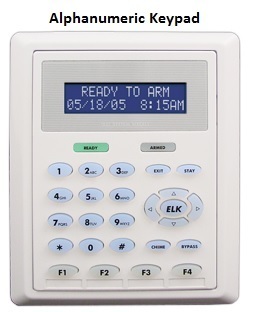 Unlike fixed or zone keypads, instead of simply showing "Zone 1" or lighting an LED, the system may be programmed to display "01: Motion: Employee Entrance" to indicate the PIR near the employee entrance is in alarm.

Uses: This detailed information is especially important in larger systems with numerous zones (8 and up) and addressable systems, as it becomes increasingly difficult for users to remember which zone is located where and discern the location of an alarm.

Further, in any system, since they display more detailed zone and status information, including the exit/entry countdown, alphanumeric keypads are easier to use than fixed keypads and less prone to false alarms caused by user error.

Drawbacks: The main drawback of alpha keypads compared to fixed or zone models is cost, typically 50-100% higher. Occasional users may also find them more difficult to use than touchscreen models, as they do not walk the user through functions, instead requiring training for use.

Price: Alphanumeric keypads range in price depending on size, design, and manufacturer, typically in the range of ~$100 USD.

Some keypads have built in speakers. This allows the technician to program audible prompts for the user to follow. Users with vision impairment may find an audio keypad easier to use. Some manufacturers refer to these keypads as "talking" keypads.

Some keypads have built in speakers and a built in microphone. This allows central station operators to speak directly to the alarm user in the event of an alarm signal, allowing the user to cancel police. Alarm companies typically charge more for two-way voice service, adding ~$5 a month to the standard central station monitoring bill.

Alphanumeric keypads with audio capability are ~$150. 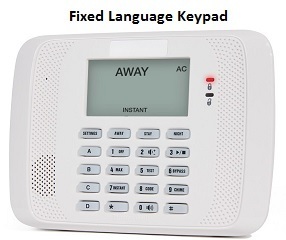 Because of this, integrators rarely use fixed language keypads, many manufacturers no longer produce them, and those that do often have not released updated versions. We mention them here for completeness, but do not recommend they be used.

This type of keypad displays even less information than fixed language models, consisting only of a number pad, one or two arming buttons, and a LEDs which light when the system is armed. 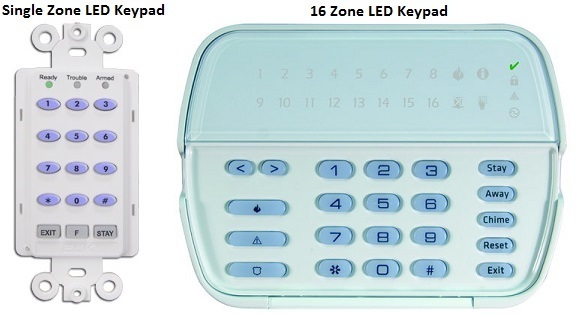 Uses: For small commercial systems with only a few zones (small outbuildings, sheds, etc.) which are simply armed or disarmed (no stay or away modes), single zone LED keypads are the simplest and most cost effective arming system.

Digital keypads are sometimes used to control a rarely used partition with limited zones as a cost-cutting measure.

Drawbacks: As with fixed language keypads, without knowing what these LEDs and zone numbers refer to, users have no way of knowing system or specific zone status, making use difficult.

Price: Zone keypads are often priced ~$50, depending on number of zones.

The newest style of keypad is the touchscreen, which replaces the physical buttons and LEDs found in other styles with an LCD touchscreen across the width of the keypad. Touchscreens typically offer the easiest operation of all keypad styles, walking users through menus to arm/disarm, or other tasks, without text length limitations found even on alphanumeric keypads. Additionally, enhanced features such as wi-fi access, light and temperature control, and Z-Wave are most likely to be found in touchscreen keypads. 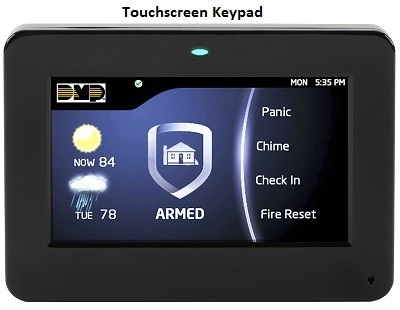 Uses: Touchscreen keypads are typically easiest to use and least prone to user error because they are able to provide more detail on system and alarm status, and present logical steps, reducing the training required for use.

Models with home automation features may also be used in residential and small commercial systems for control of lighting and HVAC. Note that typically larger commercial facilities use more complex proprietary systems for control of these elements, as Z-Wave doesn't offer the same coverage and reliability as higher end control systems. Alarm salespeople commonly use touchscreen keypads to convince customers to add IoT devices to their alarm installation, or use IoT devices to convince customers to upgrade to a touchscreen keypad.

Drawbacks: Touchscreens can be cost prohibitive, costing nearly as much or more than the system's control panel itself, which limits their use to higher end residential, where ease of use and home automation features offset cost, and larger, more expensive commercial systems.

Price: Touchscreens are the most expensive of the keypad options, with prices starting around $200, double many alphanumeric keypads.

Some manufacturers have released gateways which create a virtual keypad accessible via web browser or smartphone apps. These devices typically are wired to the keypad bus as a standard keypad would be, with another connection via Ethernet to the customer's network. 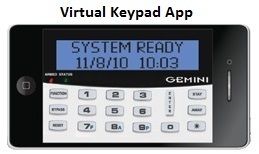 Uses: Integrators have increasingly adopted IP or cellular communicators to transmit alarm signals instead of using POTS lines. This, along with ubiquitous smartphone usage, has led to virtual keypad apps becoming more popular for both residential and commercial systems. Virtual keypad apps allow alarm users to arm and disarm their systems from their mobile devices. Some of these apps offer far more functionality than a keypad, allowing users to control their IoT devices, view live or recorded surveillance video, see alarm usage history, add and delete users, and more. Many apps support push notifications as well, allowing users to be alerted if the alarm goes off. These features are all available remotely, allowing users to control their alarms while away.

Because updating an app is much easier than updating a keypad, apps allow alarm manufacturers to add functionality to the alarm without requiring a site visit by the integrator. Alarm manufacturers can push new features to all users as they develop them.

Drawbacks: Virtual keypads should generally not be used as the sole means of arming/disarming the system, due to the possibility of phone/tablet batteries running low while the user is out of the house, leaving them unable to disarm the system upon return. A hardwired keypad is included for this reason, in most cases adding cost in addition to the Ethernet interface required for the virtual keypad.

Price: Costs associated with virtual keypads vary. In some cases, a hardware module to connect the panel to the internet is required, usually in the range of $150-250, depending on manufacturer. If the alarm will be monitored using an IP or cellular communicator anyway, it will create a pathway for the app without any additional hardware cost. Many alarm manufacturers charge a small monthly fee to their dealers for access to the service hosting the app, with the dealers using the app as an RMR opportunity. The keypad app itself is usually free.

There are two other ways of arming/disarming systems which are used in intrusion detection, though less so than keypads: keyswitches and card readers.

Many panels include an option for keyswitch disarm, which allows the user to arm/disarm the system using a lock cylinder mounted in a faceplate, typically with status LEDs, which light when the system is armed or disarmed. 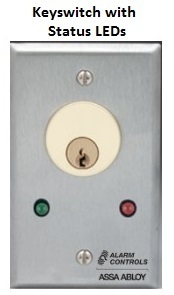 Keyswitches are often also used in retail stores with roll-down cages. Since the user must lock the storefront at night, using the same key to arm the system is simpler than entering a code.

Drawbacks: Lost keys are the biggest issue with keyswitches. Losing a single key may require rekeying of all the keyswitches in the system, or even the entire facility, if cylinders are keyed the same.

Price: Keyswitches range from about $50-100 depending on faceplate size, switch type, LEDs, and weather rating.

Many intrusion manufacturers offer the option to use card readers to arm/disarm the system. In some cases these may be built into the keypad, or they may be standalone. Relay outputs from standalone card readers or access control systems may also be used (as noted above in keyswitch disarm). 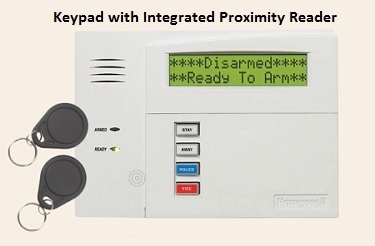 Uses: Facilities with existing access control systems are most likely to use card readers to arm/disarm their intrusion system, to eliminate the need for codes.

Drawbacks: A lost access control credential may now be used to disarm the alarm system in addition to opening the door, leaving the facility without defense against unauthorized access.