Insights From a Dummy Camera Manufacturer

Dummy cameras. It seems like most people think they are, well, dumb. But it is hard to ignore the impact they have on the security industry with people routinely asking about using them and many deploying them.

We recently interviewed the manufacturer of the #3 overall surveillance camera sold on Amazon, a dummy camera from UniquExceptional [link no longer available] that has over 500+ reviews, averaging nearly a perfect 5 stars. Company founder and president Don Shoemaker explained the growth in dummy camera sales, core drivers and key issues such as:

Real surveillance cameras do not regularly use a blinking red light, but for dummy cameras it is not a feature that is going to go away anytime soon. Customers insist on having the option. "I talk to a lot of customers about that. I have talked to customers who are adamant that they want that red light on there," Shoemaker said. For about half the customers he's talked to over the years, he says having the option for a blinking red light is a feature they are looking for. "My personal preference would be without the blinking light. For the people who don't want the light, we just tell them not to put batteries in them," he said.

One offering from UniquExceptional is a dome camera where the flashing red light only comes on after motion activation [link no longer available]. "Imagine the surprise a thief will experience when he walks into a dark room and the red LED light starts to flash on the front of the camera," its sales pitch says.

The most popular selling cameras are usually whichever cameras look the most like real surveillance cameras. So as cameras get smaller and sleeker, dummy camera companies are constantly creating new designs to stay competitive. But the type of dummy camera getting the most attention currently is their solar powered camera [link no longer available]. It costs $20. "We've been selling them for about a year and they've really been doing better over the last year than our regular cameras are. I'm assuming it's because you don't have to replace the batteries," he said. 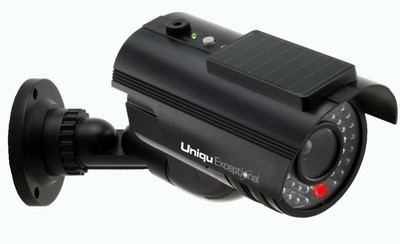 The cameras are custom made for UniquExceptional in China. They started working with a Chinese company in 2002. "I'll be honest I wasn't happy with the quality of them back then. We'd get cameras where the light didn't work or the battery connections weren't where they were supposed to be. But over the years we have been able to work with them and we got them to a much higher level quality-wise. And that's when we really saw sales start to take off. We are constantly sending samples of cameras for them to try and create."

It's website claims that it's dome cameras are real cameras "modified into a dummy."

Competition from Even Cheaper Manufacturers

Ironically, Shoemaker says the biggest problem threatening the dummy camera market is similar to the number one manufacturer complaint -- the flood of cheap "bootleg" cameras being produced overseas. And in a way, it's almost like the cameras they first rejected are coming back to haunt them.

"They look the same as ours, but they don't have the logo and the quality is not the same at all. The quality is like what we were getting when we first started. They still have all those problems. There are so many other sellers selling "our" cameras on Amazon that aren't really our cameras. Customers think they've received our brand so they contact us and complain. We've been working with Amazon the past year to get these sellers off there," he said. "I don't know where they're coming from, but they look a whole lot like our cameras."

Most Dummy Camera Sales are Residential

"Most of the customers I talked to were people who already had something happen, like a robbery in the area, and they weren't ready to go out and buy an expensive system," he said. UniquExceptional's other big seller is their motion alarms [link no longer available].

He says people will often pair up dummy cameras and motion alarms for a cheap solution while deciding whether to get something bigger. They'll usually buy one camera first and add a few more later. In contrast, businesses buy from 10-100 at a time and have been wide-ranging from marinas to storage units to strip malls. For a few hundred dollars a person can get a cheap home system, but for less then $100 they can get a set of dummy cameras. "In some cases what they bought worked fine for them, but others end up getting real systems," he says.

Shoemaker says sales were 70 percent residential and 30 percent businesses the last couple years, but it's harder to know where most of their cameras are going now that they have a contract with Amazon. A year ago, Amazon contacted Shoemaker and was interested in working out a deal to buy cameras in bulk. Now Amazon buys most of his inventory, Shoemaker says. Part of the terms of the contract are that he cannot disclose the number of cameras he's selling to Amazon or the prices, but he said they have given his business a "tremendous" boost.

Shoemaker says they have never received any orders from schools or government agencies that he knows of.

Shoemaker says customers often ask him liability questions about dummy cameras that he can not answer, like how liable they would be if something happened in front of their "cameras" that were not recording or what to do if someone contacted them requesting footage.

While popular wisdom in the security industry is that dummy cameras increase liability, IPVM has yet to find a court case where a significant judgment was awarded against a dummy camera user. Indeed, we debunked the classic 'rape under a dummy camera' myth.

Do dummy cameras have the same deterrent effect as real cameras? Shoemaker says absolutely (though what else would he say). UniquExceptional's online pitch says "even the most sophisticated criminals will think the premise is guarded by a high-tech surveillance system and go in search of an easier target."

"Because cameras are constantly changing, I don't know how anyone could tell that they aren't real. I'm constantly getting samples in, and we are constantly trying to update our cameras to what cameras really look like," he said.

However, the cabling from the dummy camera, and often the lack of any cabling can tip off an experienced person that a camera is a dummy. Indeed, cameras with flashing red lights are very likely to be dummy cameras, even if naive home owners think otherwise. Worse, are the cameras that move back and forth when motion is detected. A novice criminal might fall for it, but a more experienced one could actually be emboldened realizing that the cameras are not real.

But he says he's also talked customers out of buying dummy cameras. "If there is something constantly happening over and over, then I tell them they just might want to spend a little more and get some real surveillance just for their own safety." Deterrence is one thing, but if there is something where cameras could actually aid stopping a repeated problem, real cameras are probably more fit for the job, he said.

If you have any additional questions about the business of dummy cameras, let us know in the comments section and we will get them answered.

Death Of A Dummy Camera Manufacturer on Apr 25, 2018
5 years ago, IPVM gathered insights from a dummy camera manufacturer, who was...
Dummy California Train System Caught With Dummy Cams on Jan 14, 2016
Who uses dummy cameras? Evidently, the fifth busiest train system in the US,...
Comments (43) : Subscribers only. Login. or Join.