Hard drive failure is perhaps the number one cause of lost video in a surveillance system. But which hard drive manufacturer, if any, is most reliable? Are all hard drives the same? As part of our Winter 2012 Integrator Survey, we asked 100 integrators what their preferred hard drive for surveillance was.

Here is a visual breakdown of the top choices: 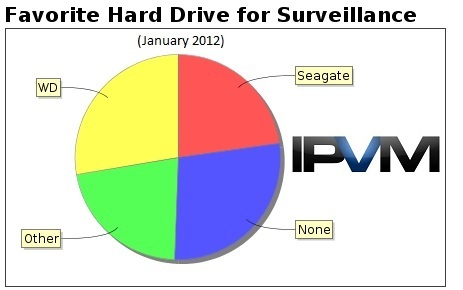 Among those with a preference, more integrators chose Western Digital, at 27%, than any other. Seagate was second, at 23%. Hitachi was a distant third, with 6%. A few other manufacturers received a mention, though none managed to gather more than 1%.

What is striking, though not surprising, about these responses, is the percentage of integrators with no preference: 28%. Other questions of favorites in our surveys had almost no "no preference" responses. The reasons for this become evident when we look at the quotes from these integrators.

Western Digital, alone with Seagate, is undoubtedly one of the giants of the storage industry. It's therefore not surprising to see them as the most-mentioned manufacturer. Here are comments from integrators preferring Western Digital:

Much like Western Digital, those preferring Seagate recommended them for their performance and reliability:

The Seagate SV35 and Constellation Series were both popular among respondents.

Finally, respondents had much the same to say about Hitachi:

28% of respondents had no preference in hard drives. The main reason for this was that they simply used whatever was supplied with their DVR/NVR or server:

Others simply viewed the major manufacturers as equal:

Interestingly, when looking at responses, no one manufacturer stood out as having higher reported failure rates than others. Western Digital, Seagate, and Hitachi all received about the same number of comments about being prone to failure. We suspect that this may mean that any of these three top choices are relatively safe.