To see how integrators are actually deploying systems, we asked "For recording type, what do you use most often?" Here's the breakdown: 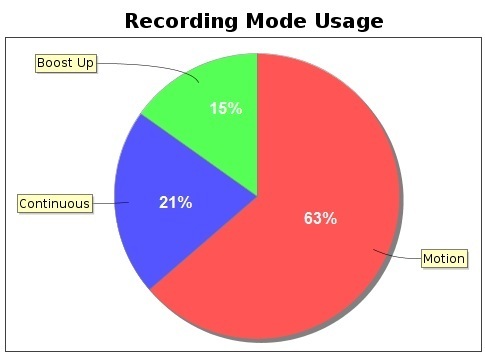 Most integrators record on motion only, with the number one reason by far being storage savings. It is not uncommon for scenes, especially in hallways and stairwells, to only experience motion 30% of the time or less. Recording on motion in these environments has the potential benefits of reducing the number of hard disks required or increasing the retention period for archived video proportionately. Scenes with 50% motion, for example, may theoretically reduce hard disk requirements by half, or double the retention period. Some users may prefer to have this extended retention period, while others prefer to save costs up front, by using fewer drives. This savings may be substantial in systems with large camera counts.

Another advantage of motion-based recording, cited multiple times, was the reduction in the amount of video operators need to review in case of an incident. Unlike continuous recording, operators searching archived video will only see motion events, which may drastically reduce the amount of video they need to review. This assumes that motion detection is set up and working properly, a common concern cited by those using continous recording.

Integrators in favor of motion-based recording had the following to say:

Proponents of continuous recording cited customer demand as the most common reason for choosing this recording mode. Many industries, such as gaming, municipal, and critical infrastructure demand 24/7 recording. In some cases, it is due to regulations, and in others simply because these larger systems can make the demand, with the budget to back it up. Additionally, many municipal systems use mostly PTZs, making motion-based recording a moot point, since cameras are constantly in motion.

Lastly, integrators choosing boost up/speed up recording typically saw it as a best of both worlds approach. Low frame rate continuous recording assured that at least some video of an incident is captured if motion detection should not trigger. Yet, motion events are captured at a better frame rate, for better evidence of incidents. Boost up recording does have some challenges, however, as we discussed in our Motion Boost Recording test. Integrators had the following to say about boost up recording:

Though these results were generally the same across users of different VMSs, those deploying more megapixel than SD cameras, and other factors, one noticeable difference was evident in those deploying 16 or fewer cameras per site. Among this segment of integrators, those using motion-based recording decreases by 13%, from 63% to 50%, with those using continuous recording increasing by 5.5%, and motion boost by 7.5%. We suspect that this may be due to a tendency to use extra hard drive space in small systems. Larger systems are usually built with slimmer storage margins, normally only equipping systems with the storage that is absolutely required. Small systems, on the other hand, are often deployed using prepackaged NVRs or smaller PC hardware, with standard 1TB or 2TB drives, which may not necessarily be required. Instead of simply not using this extra storage space, integrators may configure the system for continuous recording simply because they can.

Surveillance Recording Mode Statistics 2016 on Jul 28, 2016
Continuous? Motion? Boost? What recording should be used? What is...
Surveillance Statistics Survey Directory Vol 1 on Jan 03, 2012
In this report, we aggregate and present dozens of statistics about how...
Comments : Subscribers only. Login. or Join.