Two of the biggest trends in IP cameras collide in this unique IPVM shootout.

In the past few years, a surge of manufacturers have released integrated IR cameras as well as 'super' low light ones. Indeed, many manufacturer now offer both types.

They both address the same core problem - poor low light performance - but which one is better? and what are the tradeoffs?

In this shootout, we took 6 cameras - 3 integrated IR ones and 3 super low light optimized ones and tested them head to head.

Below is a preview of the 14 image comparisons we compiled from our tests:

In very low light scenes below 1 lux (outdoors with no lighting), integrated IR cameras offer details at close range where low light models do not, and detection of subjects at greater distances, where low light cameras produce little to no usable images. Factoring in their typically lower cost, integrated IR is the strongest option in these scenes.

At higher light levels, 5 lux and below (such as lit parking lots), low light cameras are likely the best choice, due to improved details and color information instead of a monochrome image. This is especially true at closer ranges where identifying details may be captured.

In indoor low light scenes, integrated IR cameras are typically the best option. IR illumination is often more effective in these scenes due to the reflectance of walls and other objects in enclosed spaces, resulting in less noise and lower bandwidth than low light optimized cameras.

Finally, though integrated IR cameras sometimes consume less bandwidth at night than low light modes, users should be aware that severe spikes may occur even with them. VBR with a cap is strongly recommended to avoid wasting bandwidth and storage space.

Our first test scene was a parking lot and field, with outdoor light on, varying from below 1 lux to ~10.

At 60', the performance gap widens. IR illumination begins to fade on all cameras at this range, and contrast is lost, with the subject blending into the background and obscured by noise. The low light cameras still offer color information and accordingly higher contrast between background and subject. Neither provide much detail of the subject.

At 125', the subject is nearly lost on all integrated IR cameras, while still clearly detectable in the low light models.

At 6', the integrated IR cameras deliver facial and clothing details of the subject, while the low light optimized models provide detection only.

The IR cameras continue to outperform low light models at 25', clearly showing the subject. Low light cameras at this range produce only noise.

At 60', the subject is still noticeable in integrated IR cameras, though noticeably more difficult to detect.

Finally, at 125', the subject is difficult to detect even in integrated IR models.

To test further ranges, we used Avigilon's 9-22mm IR bullet, along with two low light models equipped with 8-50mm megapixel lenses. We found in previous tests that Avigilon's 60m specified IR illumination range in this model was accurate, though power is greatly reduced at maximum range.

Starting at 125', the IR bullet is clearly superior to low light models. The Bosch NBN-733V is marginally able to detect a moving subject, but the VB630 is not. 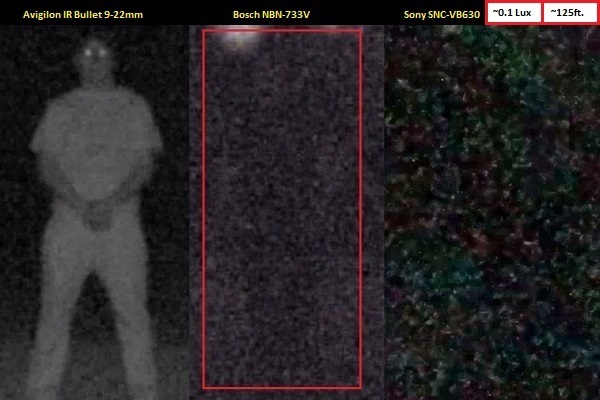 At 200', Avigilon still easily detects our subject, while the 733 is still marginal. 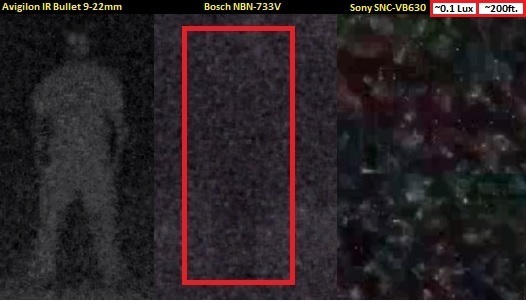 Finally, at 300', the IR bullet has difficulty detecting the subject, though he is still visible. Other cameras produce no usable images. 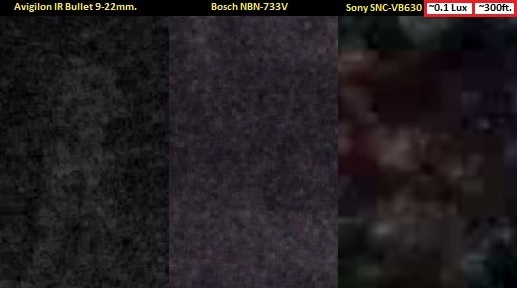 Finally, we tested in our standard indoor conference room to get a baseline of image quality and see performance tradeoffs in smaller spaces. 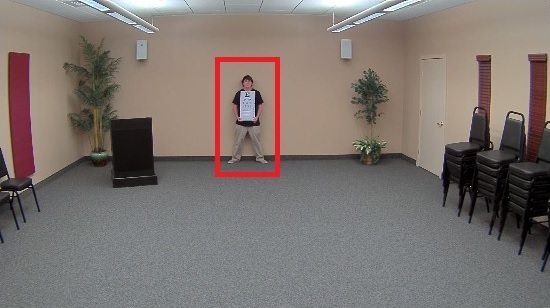 In full light, performance is close, with cameras generally performing close to the same. The Axis M1114-L suffered from more artifacting than other models in this test, obscuring some details.

The integrated IR cameras in our tests generally consumed less bandwidth than low light optimized cameras, as seen in the charts below. Note that the Avigilon H3 bullet, Dahua HFW3200SN, and Bosch NBN-733V were outliers in this, however. Dahua consumed more bandwidth than low light cameras outdoors with lights on, while Bosch consumed less than most IR cameras. Most notably, with the lights off, the Avigilon IR bullet consumes the most bandwidth of any camera in the test, near its VBR cap of 12 Mb/s, a 4x increase over its bandwidth with lights on.

Cameras were standardized at 1/30s maximum default exposure. Other settings were left defaulted.

Gain Control / AGC for Video Surveillance Guide on Apr 23, 2015
Gain control is a critical, though often overlooked, factor in low light...
Testing Day vs Night With IR on Dec 09, 2014
IR illumination helps. When it gets dark, especially real dark, with no...
Integrated IR Camera Use Surging 2014 on Jun 10, 2014
Not too long ago, integrated IR cameras were looked down upon. Like offering...
How Well do IP Cameras Work in Low Light? on Jun 06, 2009
[2016 Update: Camera technology has changed substantially since 2009. The...
Comments (16) : Subscribers only. Login. or Join.