The first real experience most integrators have with a VMS is installing the software. Immediate issues can create a bad impression. Worse, challenges can lead to integrators giving up in favor of an easier to install products.

Installation impacts ongoing operations as well. The longer and more complex a VMS is to install, the more it costs, the more likely something goes wrong, and the less likely it can be delegated to a junior tech.

In this report, we share our test findings of installing Milestone, Genetec, Avigilon, Exacq, Network Optix and Video Insight VMSes. 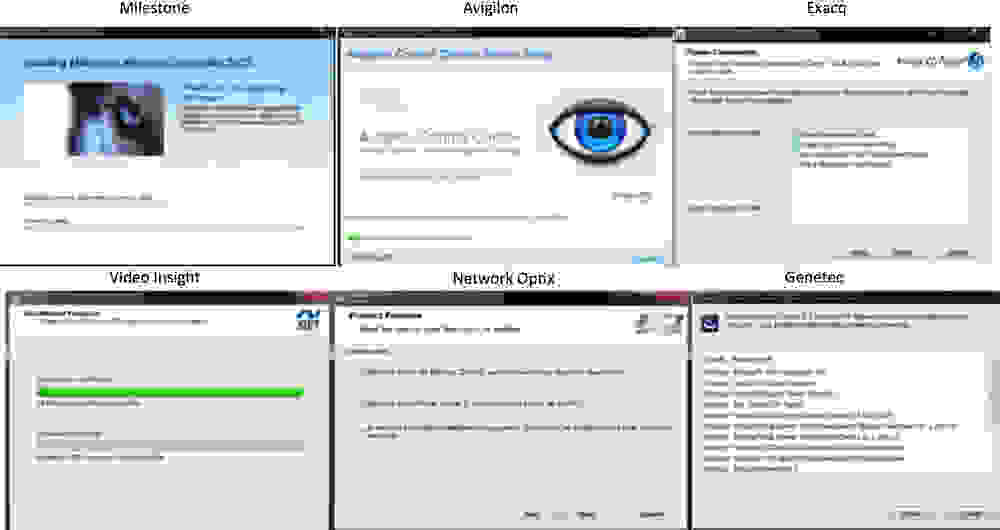 8 key differentiators were revealed in our tests:

Finding the install package is paramount to whether a VMS vendor is considered in a best of breed evaluation or not. Moreover, the Vendor’s site is the end user’s first impression of the vendor. If the integrator/end users can’t download and evaluate a system when they’re ready - it may be excluded. 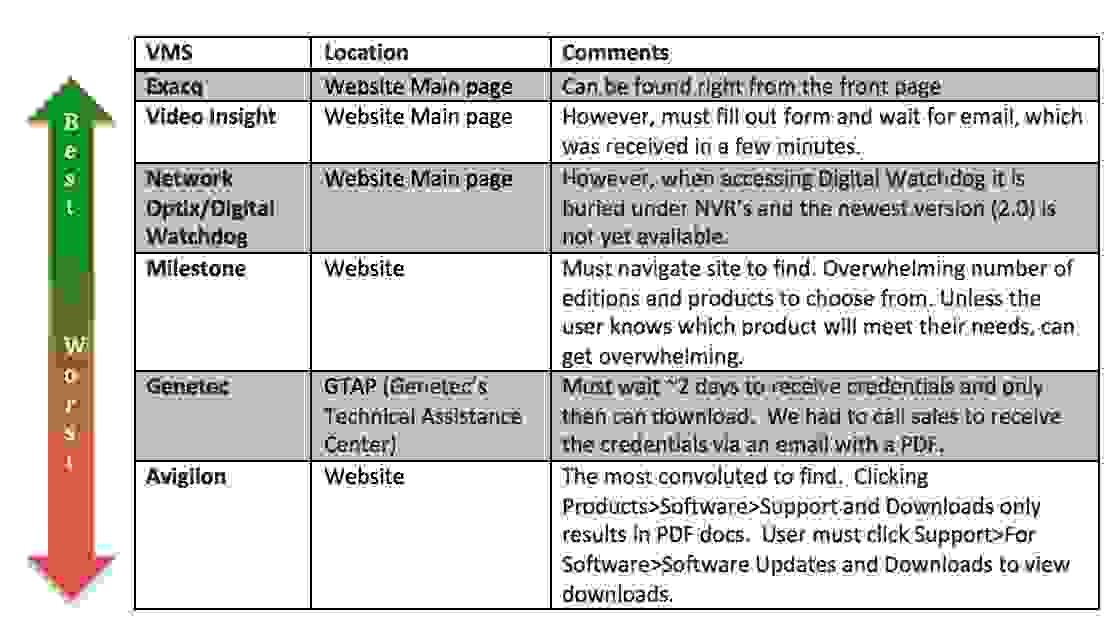 Here are the links:

Download time directly correlates to the size of the download. In the image below you can see that Milestone, followed by Genetec, took the lead as the longest download time required while the fastest was Network Optix (then Video Insight, Exacq, and Avigilon), which was available to run as soon as the Downloads folder was opened. 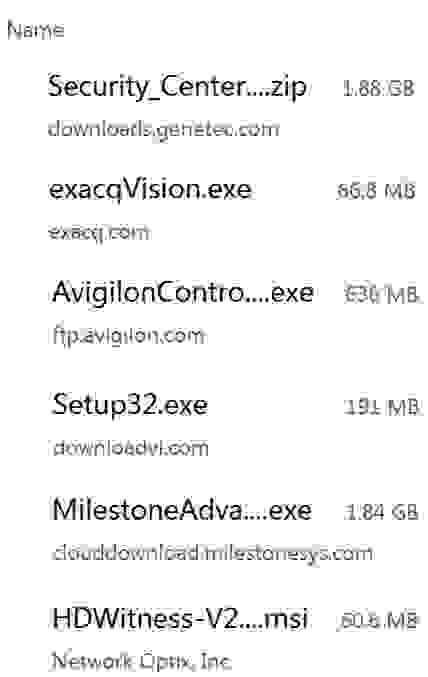 The time needed to install the VMSes ranged between ~2-15 minutes generally. Avigilon, at 6 clicks from start-finish, required very little, if any user input (other than EULA acceptance) deeming the installer almost error proof. The rest of the VMSes offered a few error prone areas with Video Insight taking the lead as the worst installer reviewed.

Video Insight - With any Network glitch during installation, both .Net 4.0 and SQL Express installation will be botched, and the installer will continue to run, rather than abort. In addition, if SQL install encountered any errors, a relaunch of the installer assumed an upgrade and THE ONLY way to start a fresh install was to reimage my machine or remove all traces of SQL (yes, even in the registry). Furthermore, the installer asks the user to pick a SQL password (with an unknown hidden one already there) without confirming password to avoid mistypes.

Exacq - Exacq allows users to reduce install size (DLL sizes are negligible in the grand scheme of process) by checking off which cameras' direct driver to install- pick the wrong one or not enough and a reinstall is necessary.

Network Optix - Installer's Enterprise Control Parameters, asked user for input, but did not designate that via the standard asterisks notation resulting in an error.

The combination of trial licenses afforded combined with a trial period was important. Is the evaluation period, by default, too long or too short? Too short of an evaluation period might not be enough to experience all of the important features. In contrast, a long-term evaluation is a marketing ploy to hook the evaluator, making it difficult to evaluate objectively. In addition, two VMses did not allow use until the product was provided with a demo product key hindering the evaluation process. Milestone (pre-pidded for e-code editions), and Genetec (allowed installation at least) both required waiting for sales to provide a .lic file or a license product key, respectively. 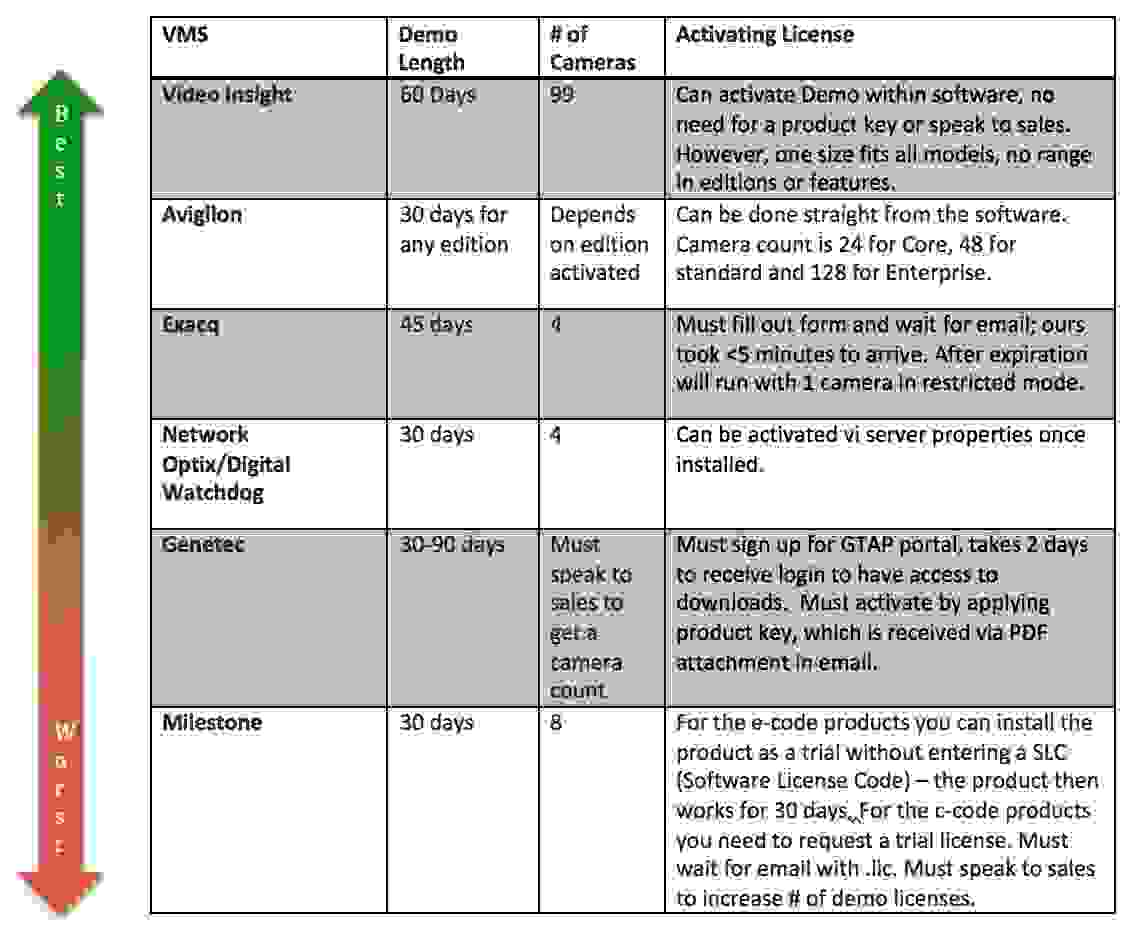 When making the decision to purchase licenses for long term use there are differences in how the VMSes asked users to apply licences. Some required multiple product keys to match the number of licenses requested because licenses are sold in predefined bundles/blocks (1, 10, 4, etc). While others require 1 license/Product Key with a customized number of camera licenses for a one time application. 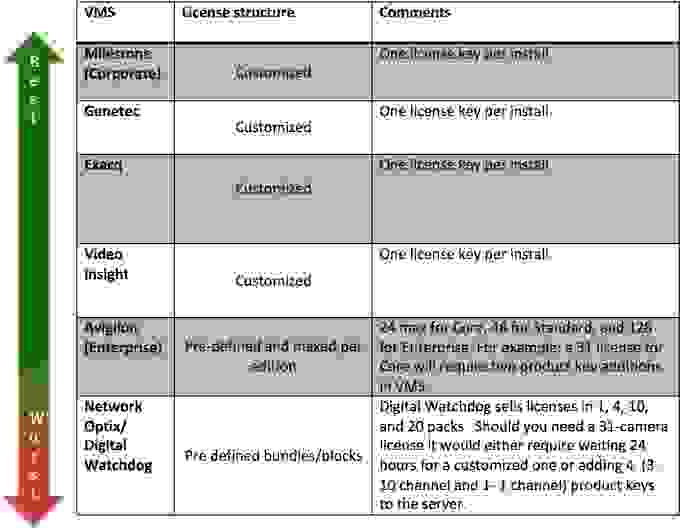 To improve efficiency and reduce incompatibility and configuration issues the VMS installation should be all encompassing. We identified two types of VMS installations: dependent and independent. The dependent VMSes (Avigilon, Milestone, Genetec, and Video Insight) relied heavily on .NET 4.0 Extended (not provided via Windows updates) that required a separate installation. Moreover, SQL 2008 was also required as a database for Milestone, Genetec, and Video Insight adding installation time ~ 4 minutes, though the configuration was done by the VMS installer. Avigilon uses a proprietary database, while Exacq, Network Optix use SQLite.

On the other hand, the independent VMSes were free of .Net and SQL requirements (notable of cross platform VMSes) and opted to use an invisible installation of SQLLite and either their own Web Server (Network Optix/Digital Watchdog) or an Apache server (Exacq).

In addition, the dependent VMSes fall into two groups as well: All-inclusive (Exacq, Avigilon, Network Optix, and Genetec) and not (Video Insight, and Milestone). The all-inclusive ones (Avigilon, and Genetec) are not dependent on Internet or downloading any of the pre-requisites - all that is needed is included in the install package. It is not uncommon to have the VMS servers isolated from the outside network and so an internet dependency could be a hassle to some integrators. 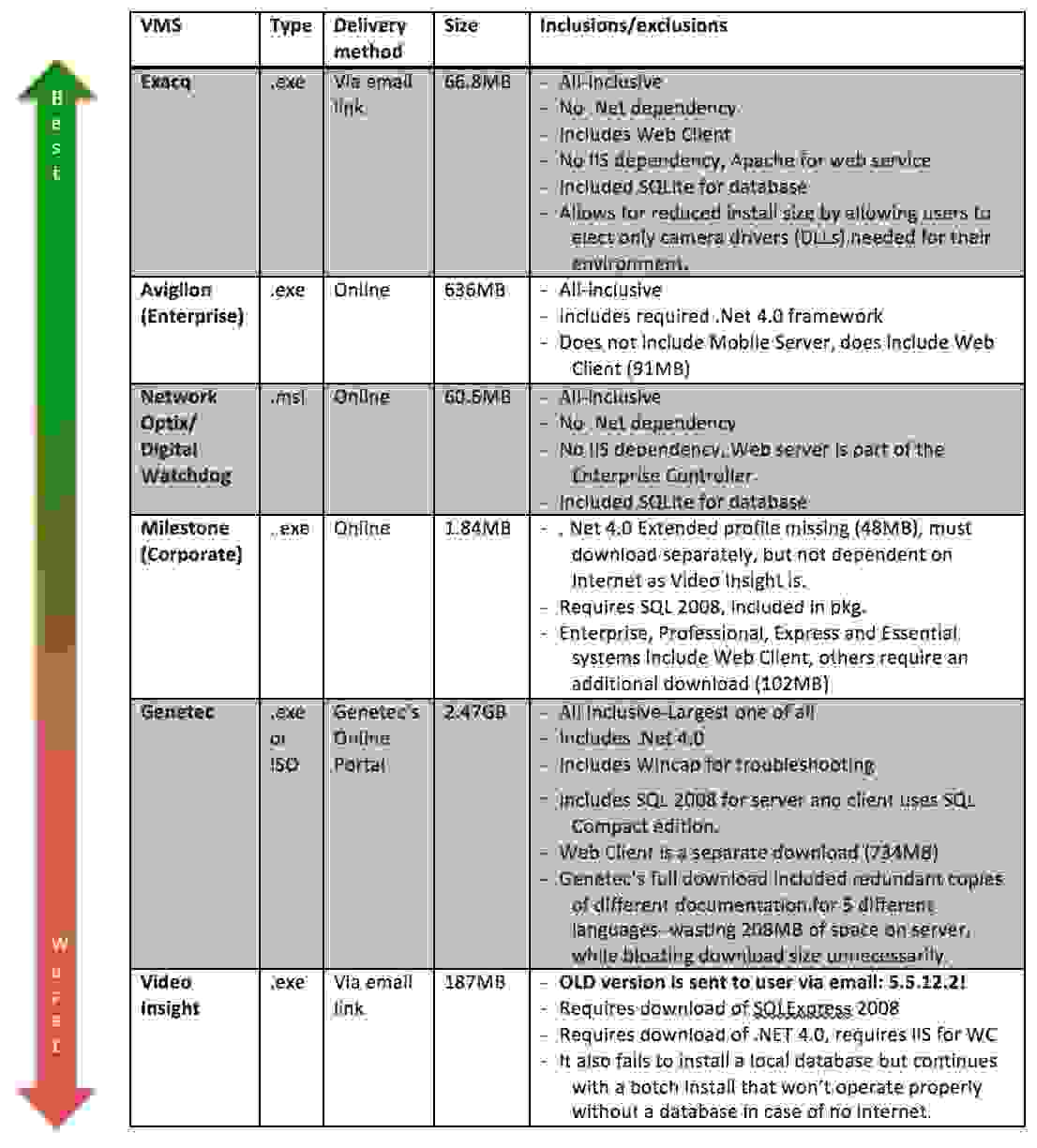 Here is an overview showing the differences as an end user:

Having a server with lots of RAM would be useless without an application that can utilize the added RAM for processes. VMSes can often suppress the fact that native 64bit is not available by simply compiling their application and installing it as Windows on Windows installation (WoW). 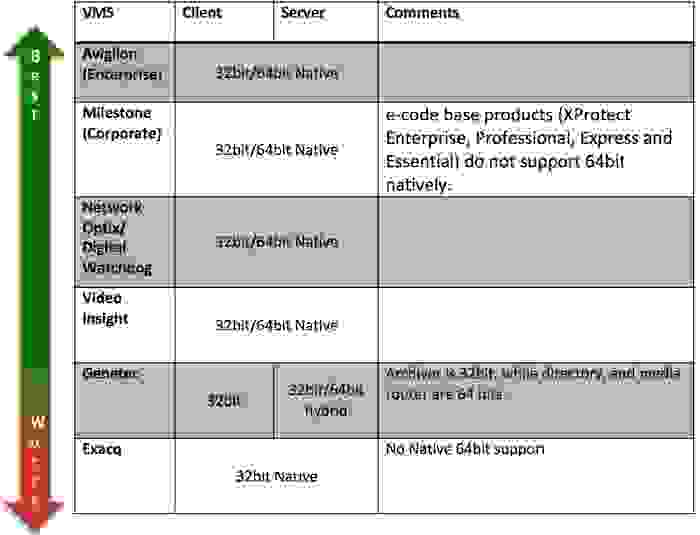 Exacq, disappointedly, is a 32bit application only, which will greatly reduce the efficiency of processes when only the first 2GB of RAM can be used, regardless of the robustness of the server purchased for this VMS. Performance of a VMS on a given server is greatly impacted by the OS bit type and the VMS’ software native support. Moreover, when adding the SQL Server (as Milestone, Video Insight, and Genetec do) installation it further reduce the amount of RAM left over for VMS processes.

Operating systems use varies between user bases, either based on budget constraints (educational, etc.) or size of the organization (the smaller it is the fastest they are to upgrade to latest OSes). The only VMS providers to offer non-Windows support are notably Exacq (Mac client, and Linux) and Network Optix (Linux).

Naming conventions may be important to evaluators performing best-of-breed and the organization of all of those installers. All of the VMS install packages included at least the manufacturers name (except Video Insight) to clearly differentiate, and some included package version (Avigilon, Network Optix) as well as the Edition used when applicable (Milestone did, Avigilon did not).

Bit rate of the package was also included in Network Optix/ Digital Watchdog and Video Insight. Although this bit of detail is likely not as important as Manufacturer name, version and edition (since best of breed is usually compared on same server type).

VMS Installer Sizes Getting Out of Control on Oct 11, 2016
Huge VMS file sizes increase installation size and can cause problems in the...
Comments (26) : Members only. Login. or Join.