Aiming, focusing, and setup of cameras is a key consideration in optimizing image quality and system performance. Traditionally, technicians often only carried a handheld monitor for aiming and focusing, and little else. In IP surveillance systems, however, this process is more complex, since cameras are network-based, and most do not offer analog output for focusing. Even if the camera is equipped with an analog video output, megapixel cameras can be notoriously difficult to focus via this method.

Generally speaking, these are the standard methods of aiming and focusing IP cameras:

To see how integrators are addressing these challenges, we asked the 84 respondents of our Fall 2011 survey the following question: 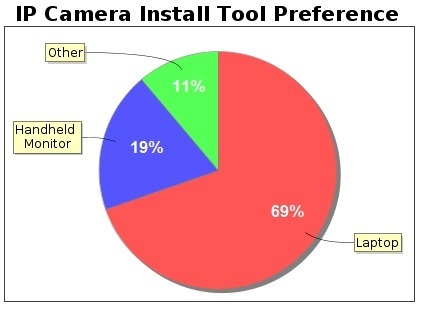 The majority of integrators (68%) are using laptops to aim and focus cameras, followed by handheld tools at 19%. Other methods followed at 11%, with tablet PCs last at 2%. The main reasons given for selecting laptops were:

Unlike other options, laptops may be used for a variety of tasks. They are the only option which allows full access to a camera's web interface, allowing settings to be changed in the field. They may also be used to connect to the VMS server from the field, if changes must be made.

In many or most cases, integrators' technicians are issued laptops as standard practice. This makes the laptop a zero-cost addition, unlike other options. Considering a decent laptop may be found for well under $1,000, it is price competitive with units such as the Axis installation display, which sells for over $600 online. Given this pricing, and the fact that it may be used for other tasks, laptops often make the most sense.

Multiple integrators mentioned strong preference for or standardization on cameras with auto-focus features. Readers may see our update on Auto Back Focus preferences from this survey for more information. With auto back focus becoming an increasingly common feature, we expect that in the next 1-2 years, cameras without it will be the exception, not the norm, which should help to simplify installation somewhat.

Here is what respondents had to say about their use of laptops for setup:

What is most striking about these responses is that, despite a very strong majority using laptops for installation, most respondents also had complaints about using them. However, the advantages of having a full-fledged PC seem to at least partially make up for the size disadvantage.

The other key takeaway from these results is that there is a lack of specialized tools for installation of IP cameras. Axis' installation tool has a number of advantages over laptops, but until two things happen, we don't expect to see widespread adoption. First, such a tool needs to be open to multiple camera manufacturers, either through direct integration or, more likely, ONVIF. Second, pricing needs to come down to lower levels. At current pricing, tools such as the Axis unit are priced too close to laptops, while providing only a fraction of the functionality.

Testing IP Camera Test Monitor (Tatung) on May 06, 2015
Integrators frequently cited insufficient installation tools as one of the...
Surveillance Statistics Survey Directory Vol 1 on Jan 03, 2012
In this report, we aggregate and present dozens of statistics about how...
Comments : Subscribers only. Login. or Join.