Multinational conglomerate Ingersoll Rand [link no longer available] stunningly announced plans to spin off its multi billion dollar security business [link no longer available], including its flagship security brand Schlage. In this note, we examine the details of the plan, the motivation behind it, compare to Schneider, UTC and Honeywell plus discuss what happens next.

Reportedly under pressure from hedge fund oligarch and shareholder Nelson Peltz, Ingersoll Rand's board voted to break off the company's "Security" business unit. While "Security" represented the company's smallest stand-alone business unit, it looms large in the door hardware and physical security markets. The brands consolidated under IR's Security Unit include:

The security division takes in $1.6-$2.0B in annual revenues [link no longer available]. The company has stated it expects the sell-off to be completed in about a year.

The picture below from the investor relations deck [link no longer available] overviews the split/spinoff: 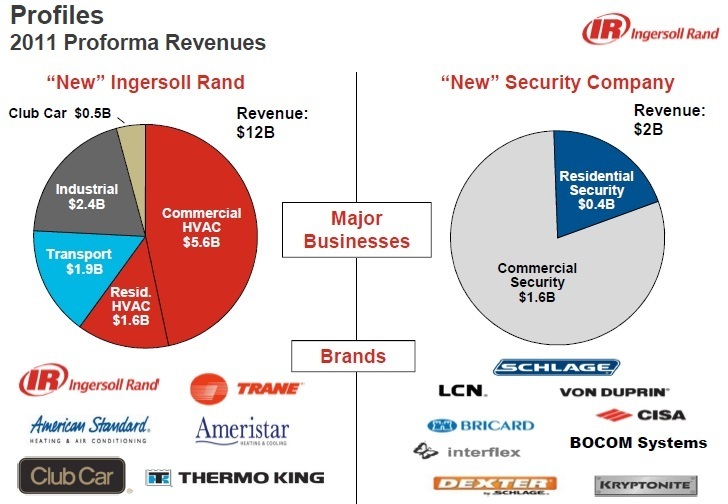 Here's what IR projects the security division/spin off to look like:

While movement within individual lines is not uncommon - for example, Schlage recently spun off its Access Control business to Vanderbilt Industries - the wholesale spin out of an entire billion dollar business is uncommon in the security market.

IR plans to load up the spun off security division with significant debt, targeting a debt/EBITDA ratio of ~2.75x to 3.25x. While not likely risky for the business, it is an indicator that maximizing cash flow and earnings per share is driving the deal, not innovation nor expansion in the security market.

Industry analysts have a less-than-positive reaction to the plans. Take this excerpt from a recent Wall Street Journal piece on the deal (bold emphasis is ours):

"Ingersoll-Rand is not screaming at us as a candidate [for breakup]," said Deane Dray, a multi-industry analyst for Citi Investment Research. "On a sum-of-the-parts basis, there's no parts that need to be unlocked."

"We like the idea of a big share [repurchase], but spinning off security ...makes little sense," added Jeff Sprague, an analyst for Vertical Research Partners, which dropped its rating on Ingersoll to sell from hold on Monday with a $46 target price."

While the stock market's mood on the plans appear to be confused, the deal is expected to raise efficiency in IR's other business units. These divisions primarily manufacture machinery and construction equipment. Overall, the conglomerate has not performed as strongly as its rivals in recent quarters, which some attribute to the broadness of its brands.

The potential upside for IR security is that it can now focus on its own goals and plans within security, rather than being part of a broader, more disconnected conglomerate. This might help them make better decisions and be more aggressive about security specific product development and marketing.

While the company indicates that security will be spun out as a whole, we believe its possible that the European focused units might eventually be spun out of the new security company as they are a small portion and not very closely related to the overwhelmingly North American focus of organization.

This runs against historic trends of massive conglomerates with businesses spanning various industrial areas including security. For instance, Honeywell, UTC, and Schneider all have similar breadth. More importantly, it raises the questions of the 'synergies' and value of brining such diverse divisions together. From a product perspective these conglomerates have generally lagged against their more focused and smaller competitors. Perhaps this is a sign of what will come for other conglomerates, or at least what should come.

Regardless, for those who perpetually bloat about consolidation, this is a move in the opposite direction.

Favorite Electrified Locks 2018 on Mar 14, 2018
Electronic lock manufacturing is dominated by 3 conglomerates...
The Best Security Manufacturer Blog on Jul 15, 2016
3 years ago, we first called this blog the best. It remains. Plus, we add an...
Allegion Releases Engage, Assa Aperio Competitor on Oct 29, 2014
Wireless locks are one of the fastest growing segments of access...
ASIS 2014 Show Floor Review on Sep 30, 2014
What Happened to the New Products? Nothing major at all....
Comments : Subscribers only. Login. or Join.