Prior to Tyco acquiring them, Exacq was one of the leading independent VMSes.

Now, Tyco / Exacq is becoming a 'solution' provider, billing their Illustra cameras as:

And prominently showcasing those cameras on Exacq's homepage like so:

We bought two dome models, the Illustra 610 full-size IR dome and compact minidome, to put this claim to the test, looking at these key questions:

The 610 compact minidome sells for about $300 online. This is slightly lower than competitive minidomes from Axis and Bosch, both about $350 online. However, this is substantially higher than low cost leaders such as Hikvision and Dahua, both of which sell comparable 1080p minidomes for ~$200 online, including integrated IR.

Note that AD is releasing a lower cost line in addition to the 610 compact, Illustra Essentials [link no longer available]. However, it is not yet available through distribution, and pricing is not yet set.

However, with word of discounts or even free licenses when purchasing Illustra cameras and Exacq licenses, many integrators may find this end to end Tyco solution attractive. While Tyco's position is that there is no official discount policy, there have been multiple accounts of these incentives and we expect they will continue and/or expand.

The Tyco End to End Solution

As a total solution, Illustra cameras and ExacqVision work well together, but still have some limitations not found in other end to end competitors, most notably Avigilon. Exacq's Illustra integration simplifies installation somewhat, with discovery, IP addressing, and basic configuration all handled through the VMS client, not requiring the installer to use the camera's web interface in many cases.

Control of these details effectively eliminates the need to use the camera web interface at all, even for advanced setup.

Tyco informs us integration development between Illustra and Exacq will continue to progress, but no details were given whether integration this deep is planned.

In this video we review the physical construction of both cameras, fairly typical for their form factor:

In this video, we review configuration of the Illustra cameras. While both use different web interfaces, they are laid out similarly and include mostly the same options.

Both cameras worked well with Exacq, with some advanced features such as auto-focus, corridor mode image rotation, and camera-side motion detection configuration integrated into the Exacq client. Features varied slightly, since the 610 compact did not include auto-focus controls and included more configurable motion detection zones than the 610 IR dome.

Note that Illustra is not the only manufacturer for which Exacq has integrated these advanced controls. Others, including Sony and Axis, also allow control of focus, rotation, and motion detection.

While none offered support via direct drivers, we had no issues adding either camera to other VMSes (Avigilon Control Center, Genetec Security Center, Milestone XProtect) via ONVIF. However, advanced configuration features such as motion detection, corridor mode, and auto-focus were not available in these other VMSes.

This image shows the full test FOV of the 610 full size dome: 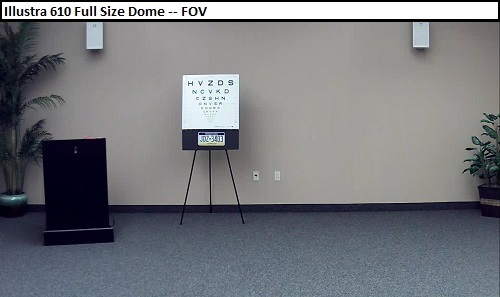 In full light, image quality is similar to other 1080p models with no notable issues. The test subject's face is clearly visible and the test chart is easily legible to line 5/6. 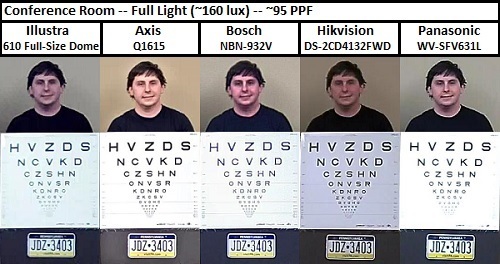 At ~0.1 lux the Illustra 610 provides similar subject details to the Hikvision and Panasonic IR cameras. However, the chart is less legible, down to only line 4, vs. 5 or 6 in the other IR models. Neither non-IR low light camera (Axis and Bosch) provides usable images at this light level. 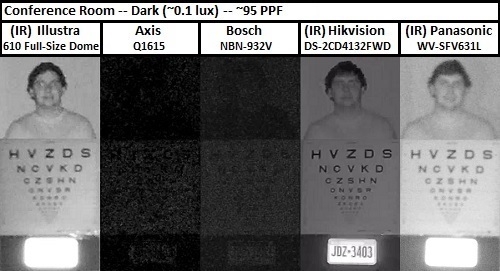 This image shows the full FOV of the Illustra 610 compact minidome. Due to their differing fixed lenses, compact dome cameras were staggered, varying distance to the subject to compensate for different FOVs. 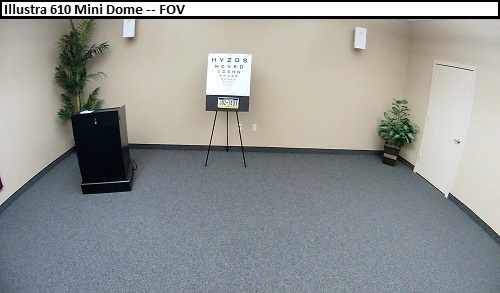 In full light, the 610 compact minidome performs similarly to other cameras, with a slightly brighter, clearer image of the test subject. 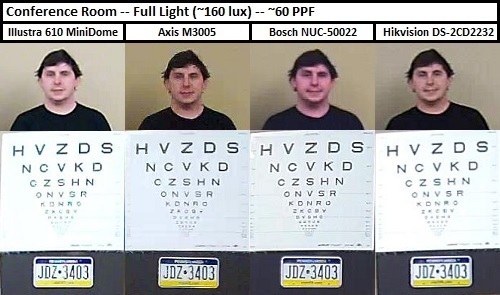 Lowering light to ~3.5 lux, the 610 minidome provides less detail of the test chart than other models, though facial details are similar. 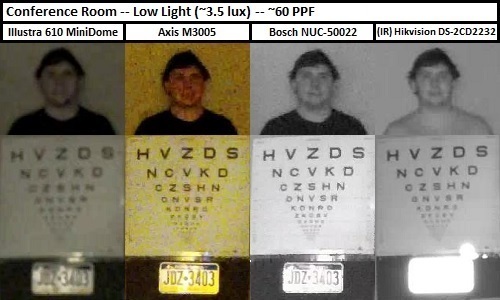 Finally, at ~1 lux, the Illustra camera as well as Axis M3005 do not produce usable images of our subject and limited legibility of the test chart. The Bosch NUC-50022 and Hikvision cameras still provide subject images and better chart legibility. 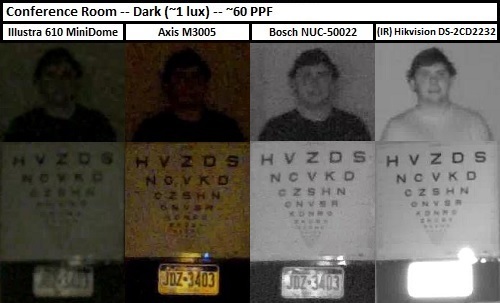 The Illustra 610 IR dome's bandwidth was average in full light, slightly higher than Axis and Hikvision, and lower than Bosch. In the dark with IR on, bandwidth was substantially higher than the other IR dome tested, the Hikvision 4132, whose bitrates were notably very low in past tests as well.

The 610 compact minidome's bitrate was lower than most cameras in full light and low light (~3.5lx). At ~1 lux, it was higher than both the Axis M3005 and Hikvision 2232. The Bosch NUC-50022 was highest at this light level, but produced a much more usable image, without added IR.

These are the firmware versions used in this test:

Software House Access Control Company Profile on May 02, 2016
In our 12th access company profile, we examine Software House's C-Cure access...
Exacq vs Avigilon on Jun 17, 2015
A member requested: "I need to find some IPVM info on Exacq vs. Avigilon. I...
Get Your Free Exacq Licenses on Mar 31, 2015
Despite Tyco employees protesting to the contrary, Tyco has now confirmed...
Fired: All But One Exacq Rep Firm Now Out on Mar 23, 2015
And then there was one. After firing multiple rep firms in January, Tyco has...
Milestone Hires Fired Exacq Rep Firm on Mar 20, 2015
The battle between Exacq and Milestone in the US is heating up. Less than 2...
Comments (5) : Subscribers only. Login. or Join.