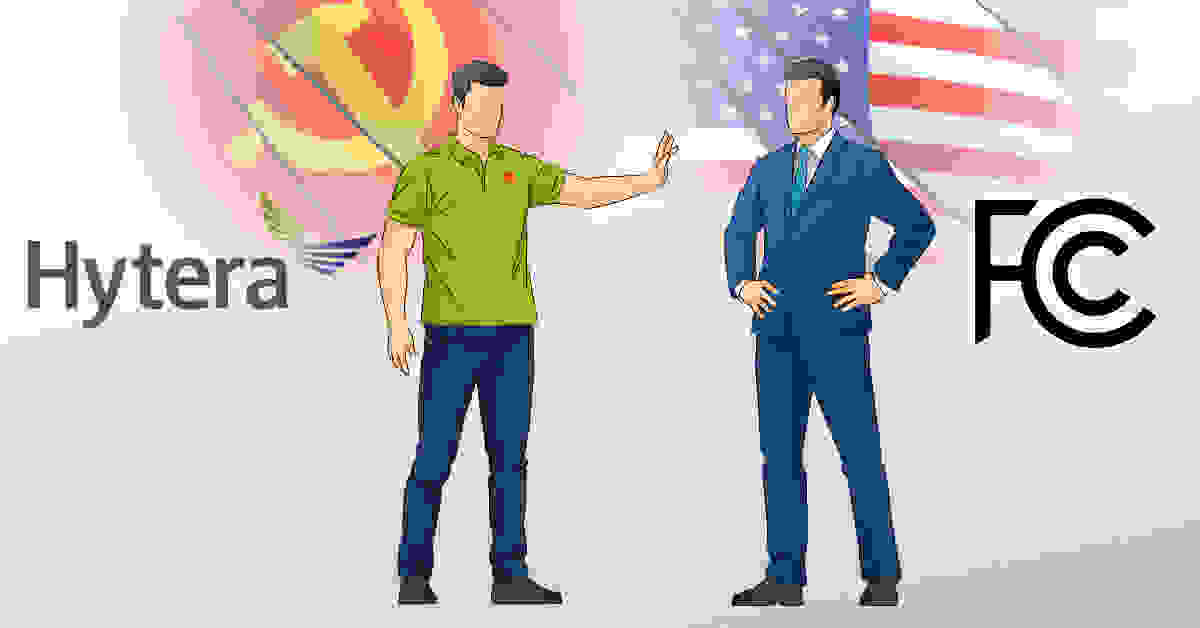 IPVM investigated Hytera's "ties to the Chinese Communist Party" documenting its own PRC communications that clearly show Hytera's significant ties and that it lied to the US FCC to try to stop them from banning Hytera authorizations.

Hytera has sought to distance itself from the CCP, with ties to the PRC state being a key concern behind the FCC's proposed ban on equipment authorizations for China companies posing an alleged national security risk. Hytera's official public comments to the FCC claim:

A few days later, Hytera added a follow-up comment admitting that a PRC state-owned investment firm is slated to purchase a 10% stake of the company. But Hytera has failed to acknowledge ties to the Chinese Communist Party that run even deeper and can be demonstrated using Hytera's own social media posts.

Hytera Committee "Adheres to the Leadership of the CPC"

Although Hytera claimed in its FCC comment that it has "no ties to the Chinese Communist Party," this WeChat account's info page claims that the company party committee "always adheres to the leadership of the CPC [Communist Party of China]." 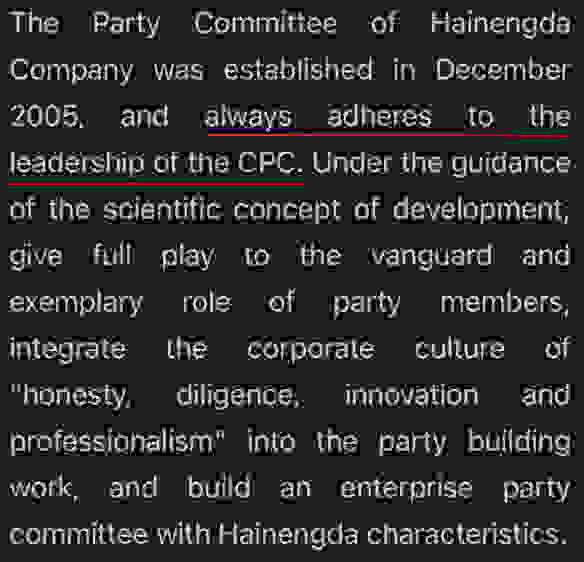 Hytera's WeChat account posted a flowchart detailing the breakdown of Hytera's party committee structure, including 13 separate branches, 9 of which are Hytera R&D departments. The sales department and supply chain departments have their own party committee branches. The clear vertical bars at the bottom list the names of each branch's party secretary. 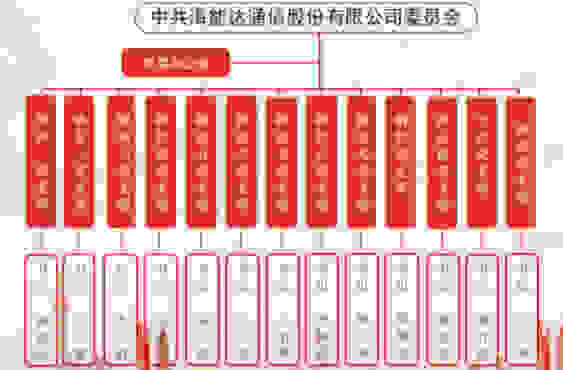 At least until mid-2020, Li Xin, a VP at the company in charge of legal affairs was Hytera's party secretary. Li told a local Shenzhen radio station in July 2020 that "the company now has 434 active party members, plus more than 1,000 party members under territorial management, accounting for more than 15% of all our employees." 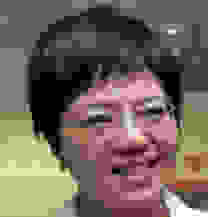 Our company has always established a party building philosophy, which is to bewith the party and communicate on demand. From the perspective of company development, we develop our products in accordance with the needs of customers. From the perspective of party building In other words, it is to do our party building work in accordance with the needs of the masses and party members. Because of such strong and excellent members, the company's combat power and cohesion have been continuously improved. [emphasis added]

In the same article, Li said Hytera's quick response to Motorola's lawsuit against Hytera alleging stolen trade secrets has "proved that Communist Party members can stand up," sharing that "the head of [Hytera's] Americas region department is a party member."

Although Li's LinkedIn states that she left Hytera in June 2020, a June 30, 2021 article from the Nanfang Daily, the official newspaper of the Guangdong provincial committee of the CCP, still identified Li Xin as the then party secretary of Hytera:

"We have tasted the 'sweetness' of party building." Li Xin, vice president and party secretary of Hytera Communications Co., Ltd., said. For many years, Hytera has insisted on leading the development of the company with party building, cultivating party members into 'business backbones' [key business personnel] and vice versa. During the epidemic, party members and employees rushed to the front line of the fight against the epidemic, demonstrating the vanguard and exemplary role of party members.

Hytera celebrated the 100th anniversary of the CCP's founding in July 2021 by posting a WeChat article to its party committee account, detailing the "commendation event" that the company held. 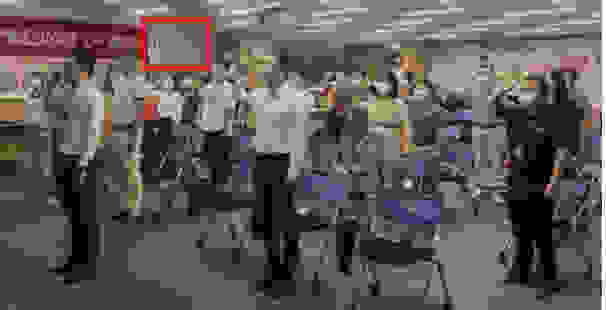 At the event, Guo Xiaole, the party secretary of the Hytera R&D 1st Branch announced that the Hytera party committee had been awarded the title of "Advanced Primary Party Organization in Guangdong Province":

He said that the party committee of Hytera has just been awarded the honorary title of "Advanced Primary Party Organization in Guangdong Province". This is not only the Guangdong Provincial Party Committee’s affirmation and encouragement of Hytera’s efforts to do a good job in party building over the years, but also a plan for the party committee’s future party building. New requirements and new expectations are put forward. To this end, the Hytera Party Committee will live up to expectations, unite and mobilize the company’s broad masses of party members, and continue to polish the Hytera’s party-building brand with a fuller mental state and a more pragmatic work style.

In order to commemorate the great achievements of Chairman Mao Zedong, carry out revolutionary traditional education, and strengthen the communist ideals and beliefs of party members and the enthusiasm for learning, on October 18, 2019, the Hytera Party Committee organized 40 party members to the revolutionary education base Shaoshan to carry out the "Never forget the original aspiration, and firmly keep our mission in mind" theme research activities.

The employees on the trip were pictured with the banner that reads "Never forget the original aspiration, and firmly keep our mission in mind - 2019 Hytera Party Member Patriotic Education Activity."

"Never forget the original aspiration, and firmly keep our mission in mind" is a well-known slogan introduced by Xi Jinping during a speech during the 2017 19th National Congress. 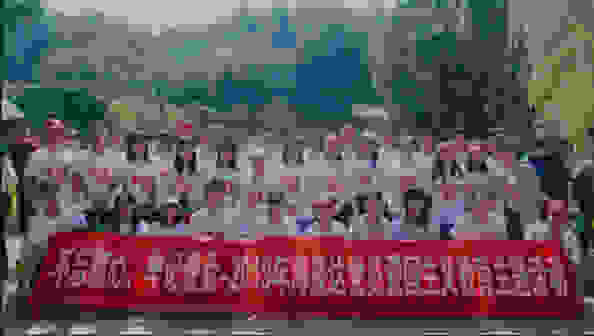 Hytera even assured the FCC that founder, President, and majority shareholder Chen Qingzhou "is not associated with and has never been a member of the Chinese Communist Party (“CCP”)."

But a 2017 Globe and Mail report by famed Canadian journalists Robert Fife and Steven Chase cast Qingzhou as a party insider, saying he "has travelled on trade missions with the Chinese President" and noting that the Canadian Security Intelligence Service (CSIS) - Canada's equivalent to the CIA - warned against Hytera plans to purchase a Canadian technology company, citing concerns this would turn over "advanced military laser technology" to PRC officials.

Hytera's own social media activity backs up these claims. In October 2015, Hytera posted pictures of Chen Qingzhou and Xi Jinping at the same event in the UK, claiming Chen traveled as "an entrepreneur delegate of President Xi Jinping." 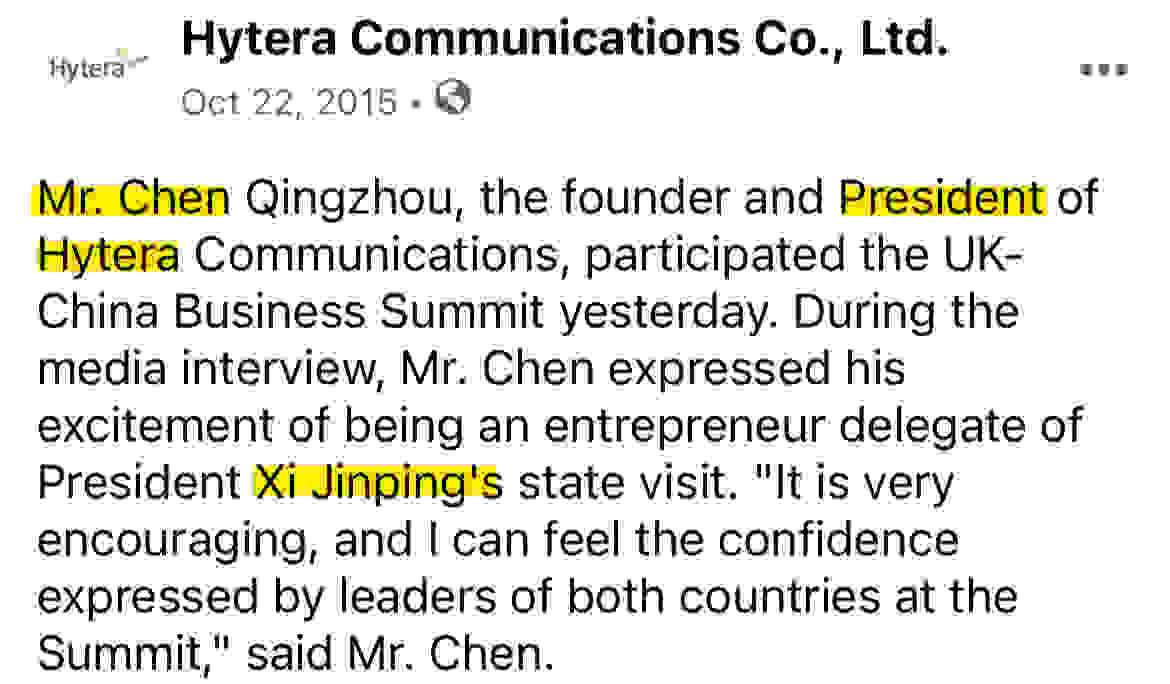 Neither Hytera nor their attorneys who submitted the "no ties to the Chinese Communist Party" document responded to several requests for comment.