How long it takes for a surveillance system to be replaced has a huge impact on adopting new products or technologies. Like cars, security users do not buy a new surveillance system every month or even every year. Indeed, systems are clearly only purchased every few years - but is it every 3, 5, 7 years or more? The longer it is, the harder it is for new technologies - whether it is IP cameras, HD SDI cameras, VMS, video analytics - to break it as they typically need to wait for the big new replacement purchase. In this note, we provide the first end user survey results to answer that question.

In the chart below, here are the results from a survey of 60 end users: 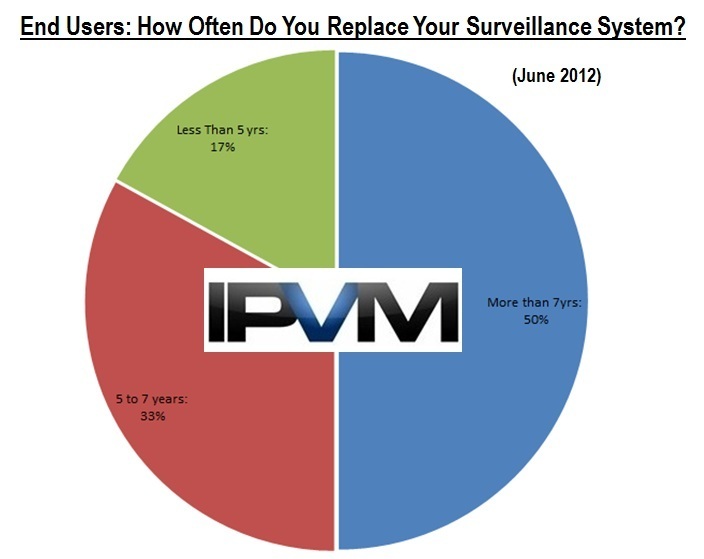 This result indicates that surveillance end users overwhelmingly wait more than 5 years before upgrading with a median term of 7 years. Despite the impression that technology is volatile and pressures to stay current, these results clearly demonstrate that change only happens when several factors coincide. Very few responses provided only one criteria for updating, and several mentioned all the key takeaways listed below:

Three themes emerge as the common drivers describing when end users 'pull the trigger' and upgrade:

When it comes to upgrading surveillance equipment, available funding dictates when and where upgrades take place:

Even if compelling rationale and need exist for new surveillance equipment, unless that activity has been budgeted or planned for, nothing happens. Many of the responses indicated that lack of funding has prolonged existing equipment service life and that trend is expected to continue.

A number of responders adamantly suggested that unless new functionality or advanced features provide incentive to change, the question is a moot point:

Many of these users are also current adopters of megapixel cameras, which strongly suggests that they are not simply fickle, but do not see tangible value pushing technology beyond proven platforms.

Answers in the final group expressed satisfaction in the current performance of surveillance systems, and that only spending for repairs and maintenance is to be expected.

While many like to cite the nice round number of 5 years as the industry average, these survey results show that it is notably longer and often significantly longer, with systems going nearly a decade before a replacement is deployed.

Appreciating a long system life-cycle is important to understanding key strategic elements to the surveillance business:

Verkada False Allegations Against Avigilon Exposed on May 08, 2019
Verkada has leveled false allegations against Avigilon, as part of their...
Lifespan of Electronic Access Control Systems on Jul 01, 2014
Just how long do end users hang on to access systems before they look to...
Comments : Members only. Login. or Join.