This could be the biggest thing to hit access control in years. A Silicon Valley startup has developed a low cost 'smart' adapter for existing locks allowing users to remotely open and close their door from their smartphones. In just the first few days, they have sold over $1 Million of these units, online direct to customers. How big can this get? In this note, we examine its positioning, potential weaknesses and contrast it to traditional locks and Z wave mobile enabled door locks.

Not Actually A Lock

Unlike the company's previous generation product (which this is replacing), the new Lockitron is not a lock at all. Rather, it is a motorized thumbturn cap that installed on top of existing hardware. Using WiFi or Bluetooth, the mechanism can be operated remotely from mobile devices or internet browsers with no mechanical key required to lock/unlock doors. 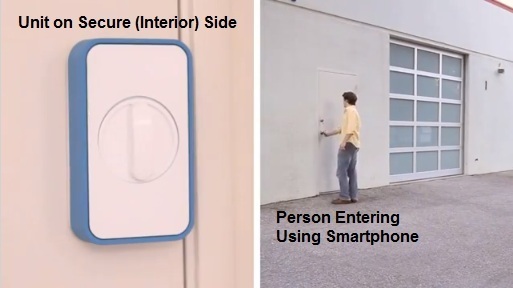 With this approach, Lockitron can retrofit existing doors (unlike the previous generation). Not only does this simplify installing, it cuts down on door compatibility problems with changing out lock hardware. Check the promotional video below for a overview:

The basic features of the new unit include:

The latest version of Lockitron is in pre-order, with the first production run expected to ship in Q1 2013. The '2nd Gen' version has the same remote accessibility features as the previous version, but is a newly designed piece of hardware.

The design of the unit makes it vulnerable to deadbolt binding and breakage. Unlike commercial grade door hardware designed for millions of cycles, residential grade hardware (BHYMI Grade 3) is commodity grade and cheaply designed. Not only is it prone to unexpected breakage, but other factors like door warping and latch bending can cause the deadbolt to bind and be difficult to turn over time.

The developer makes no statement about how strong the torque the unit applies to the underlying thumbturn, but unless an existing deadbolt is freely turnable, the Lockitron could have difficulty operating or the batteries could drain faster than expected.

Retrofitting Lockitron to existing hardware could also be a problem depending on what style lock is installed. Lockitron is meant to actuate the deadbolt only, and doors with 'lever locks' or 'knob locks' will not be able to use the device. If a door is equipped with a secondary knob or lever handle lock, it must be left unlocked all the time and only the deadbolt used to secure the door.

Additionally, if a hardware set is linked together so that the handle must also be dropped to unlock the door, the mechanical linkage must be removed so the deadbolt functions independently of the handle.

The manufacturer's image below shows which types of hardware can be used:

The 'green checkmark' represents the ideal compatibility situation, while the 'yellow X' can be used if properly modified. The 'red X' mortise set cannot be used with Lockitron, as no mounting surface is afforded by the thumbturn for the Lockitron device to be secured to the door.

Three main competitive options to this are:

Regular lock and key are essentially 'free' as they are typically already in place. The first and most basic competitive comparison is whether to do nothing or spend $199 to add Lockitron to one's existing doors.

For shared living spaces, small offices, or community facilities like churches or workout rooms, Lockitron offers a much more convenient solution than always needing to have a keyholder present. Not only can doors be unlocked remotely, they can be locked up from afar at nite. This potentially can save transportation time simply to secure doors. We see this application having the strongest use case based on need, and with several potential users will be easiest to justify costwise.

For residential customers, using Lockitron at home means that runners can leave keys at home, accidentally locking yourself out is difficult, and there is no need to circulate or manage 'emergency keys' among friends or neighbors. Considering the $200 price is for an 'add-on' device to increase convenience, but not security, Lockitron may struggle to be adopted outside the 'geek/gadget' crowd, and even if desired - may be too costly for many younger households. While many young, urban professionals carry smartphones without hesitation, an older or less-technically adept demographic lacking mobile devices will have a difficult time justifying any benefit from Lockitron.

While other 'mobile enabled' door locks are available, most use 'Z-Wave' network protocols for operation. While the overall function is very similar (using mobile apps) to the Lockitron concept and both require access to an internet connection, the Z Wave model require a separate base unit/controller that adds between $50 - $200 to the deployment.

While the Lockitron is a additional component to existing hardware, the Z-Wave units are replacement locksets. Not only must the door have the proper cutouts, new keys must be cut - often affecting more than one 'commonly keyed' locksets.

With all elements considered, installing a Z-Wave lock can cost between $300 - $450:

Lockitron is obviously not a direct replacement for the power of a centrally managed electronic access control system. However, it is so much less expensive and less complicated than than a professional system, we could see smaller businesses with just a few doors choosing this. While this is unlikely to be a serious threat to existing providers, who typically specialize in larger systems, it could help address a very underserved segment of the EAC market.

Low cost and DIY support for existing locks makes the new Lockitron solution very appealing to the broad consumer and small business market. We think the company has a chance to significantly change the entry level access control market and become a disruptive player to stagnant, low innovation segment. With first products not scheduled to ship until 2013, it will certainly take some time and issues could arise. Nonetheless, this is the most promising new access control entry we have seen in many years.

We will update this note with feedback and results from hands-on testing once units begin shipping.