Honeywell did $39 Billion dollars in revenue last year, but they are asking the public for $50,000 (.0001% of revenue) to fund their Indiegogo campaign for a new smart home security system.

We examine the proposed features and functionality of Honeywell's Indiegogo offering to see how it compares to Canary and other DIY systems. 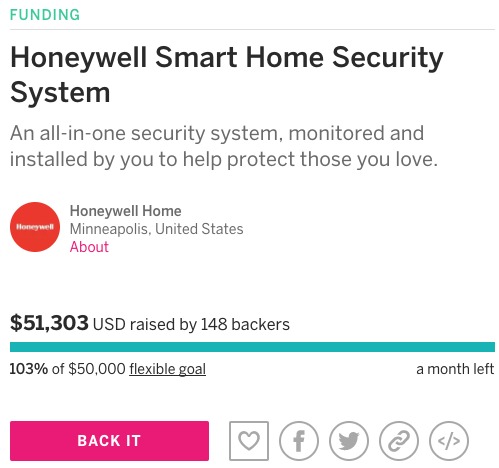 Summary: Not Another 'Me Too' DIY Intrusion Product

The overall appearance of the new system is similar to Canary, and is roughly a soda can sized appliance designed to sit on desks, countertops, or bookshelves. However, Honeywell's device has some strongly differentiating features that Canary, and many other DIY systems do not have.

Users will leverage Honeywell's existing Lyric App to control and manage the system for either Android or iOS phones. 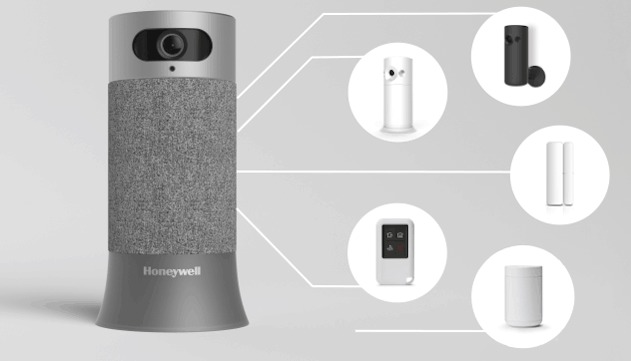 Among the individual sensor types that can be added are magnetic door/window contacts, wireless keyfobs, wireless cameras, and PIR motion sensors.

All peripheral devices will be wireless, claim 256-bit AES encryption, and are battery powered. However, the most interesting and potentially most useful sensor, the MotionViewer, will not be available at product launch.

But many of the Base Stations peripherals and eventual claimed features will not be ready when the product is released. While the risk of them being straight-up 'vaporware' is small, the chance they will be delayed is high. The most interesting features with 'TBD' availability are:

Rather than full reliance on video from the base station's camera, Honeywell's system is claiming additional battery powered motion sensors with cameras will be available. The units will be available in both indoor and outdoor/weather tight models. Video clips will be uploaded to a cloud portal via the base station. This helps explain Honeywell's sudden discontinuation of Dragonfly, previously selling motionviewer alarm devices to the residential market.

Note: The product image and screenshots are renderings and not actual devices. MotionViewers are not expected to be available until Q1 2018.

The base station will support audio analytic triggered alerts, claiming 'It can also alert you to unusual sounds, like a smoke alarm or a crying baby'. However, the functionality is yet to be released and slated to be added sometime 'in 2018'.

The unit claims it will eventually add support to recognize faces, and eventually be able to alert users when kids or other familiar faces are within range of the base station. We are skeptical they work smoothly when released, as even commercial products we've tested claiming the feature have performance and reliability issues.

Honeywell obviously has the resources to bring this product to market, with or without the relatively paltry $50,000 from Indiegogo, the fundraiser is more of a publicity driver than a financial one. They have currently raised ~$51,000 (exceeding their goal) from 343 backers, indicating an average of ~$350. The top-level backer option, a $399 "Ultra Pack", sold all of its 100 allocated options. Overall, this indicates strong interest from consumers in this DIY Honeywell alarm. 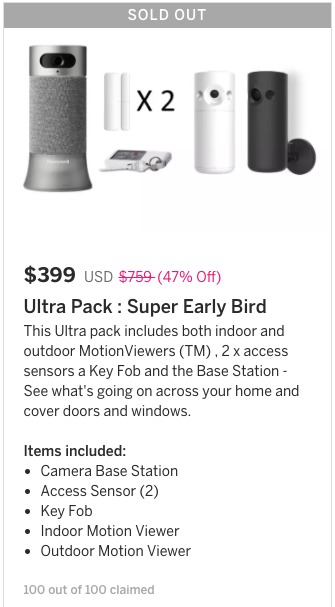 In general, this DIY and non-channel intrusion offering is a negative for residential Honeywell installers. While specific details regarding professional monitoring support are unclear, it is clear that Honeywell is leveraging its brand direct to customers without needing the installation channel.

Even previous residential specific offerings like Lyric and Honeywell Total Connect 2.0 are still resold via dealers, but this new intrusion bypasses the existing channel entirely.

Indeed, the move is part of a larger restructuring of Honeywell's commercial security business, which involved ADI To Be Spun Out of Honeywell and seemingly falls inside the recent pattern of separation from commercial dealer channel.